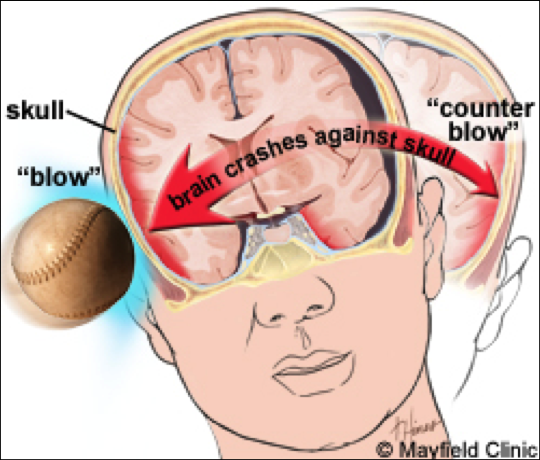 Concussion, from the Latin concutere ("to shake violently") is the most common type of traumatic brain injury.  And concussion can cause a whole range of spiritual experiences from hallucinations to visions and out of body experiences.

Concussion is usually defined as a head injury with a temporary loss of brain function.  In 2001, the first International Symposium on Concussion in Sport was organized by the International Olympic Committee Medical Commission and other sports federations in order to define concussion more precisely.   A group of experts agreed that concussion typically involves temporary impairment of neurological function that heals by itself with time, and that neuroimaging normally shows no gross structural changes to the brain as the result of the condition.  Thus according to the classic definition, no structural brain damage occurs in concussion; it is a functional state.  Having said this, however, repeated concussions can cause cumulative brain damage such as dementia.  This may seem irrelevant, as the chances of being repeatedly concussed would seem rare,  but a boxer receives repeated concussions. 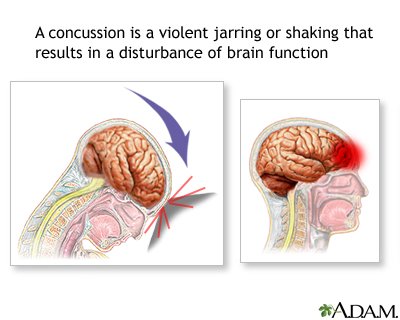 Common causes of concussion include sports injuries, bicycle accidents, car accidents, and falls; the latter two are the most frequent causes among adults. Concussion may be caused by a blow to the head, or by acceleration forces without a direct impact. On the battlefield, people can be concussed by nearby explosions.

Up to five percent of sports injuries are concussions. Sports in which concussion is particularly common include american football, rugby and boxing. The injury is so common in the latter that several medical groups have called for a ban on the sport, including the American Academy of Neurology, the World Medical Association, and the medical associations of the UK, the U.S., Australia, and Canada.  Sailing has its share of concussions too when the boom hits the head.  You can get hit by the ball in hockey and even golf.

The brain is surrounded by cerebrospinal fluid, one of the functions of which is to protect it from light trauma, but more severe impacts or the forces associated with rapid acceleration may not be absorbed by this cushion. Concussion may be caused by impact forces, in which the head strikes or is struck by something, or impulsive forces, in which the head moves without itself being struck.

Forces may cause linear, rotational, or angular movement of the brain, or a combination of these types of motion. In rotational movement, the head turns around its center of gravity, and in angular movement it turns on an axis not through its center of gravity. The amount of rotational force is thought to be the major type of force to cause concussion and the largest component in its severity. Studies with athletes have shown that the amount of force and the location of the impact are not necessarily correlated to the severity of the concussion or its symptoms. 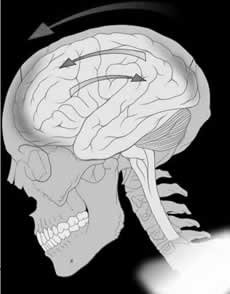 The parts of the brain most affected by rotational forces are the midbrain and diencephalon. It is thought that the forces from the injury disrupt the normal cellular activities in the reticular activating system located in these areas, and that this disruption produces the loss of consciousness often seen in concussion.Other areas of the brain that may be affected include the upper part of the brain stem, the fornix, the corpus callosum, the temporal lobe, and the frontal lobe.

Where there has been an impact to the skull, shock waves going through the skull and brain can result in other sorts of temporary malfunction of the brain.  Damage may occur directly under the site of impact, or it may occur on the side opposite the impact (coup and contrecoup injury, respectively). 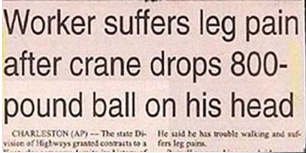