Jean Aman - Hesiod And His Muse 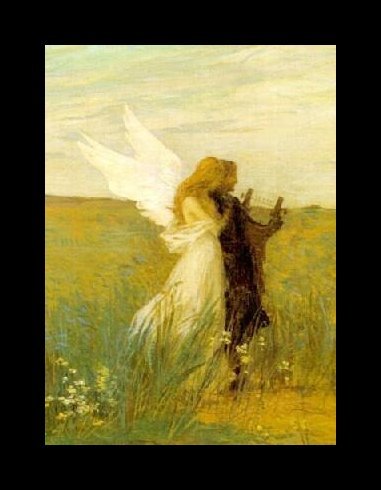 (ll. 1-25) From the Heliconian Muses let us begin to sing, who hold the great and holy mount of Helicon, and dance on soft feet about the deep-blue spring and the altar of the almighty son of Cronos, and, when they have washed their tender bodies in Permessus or in the Horse's Spring or Olmeius, make their fair, lovely dances upon highest Helicon and move with vigorous feet.

Thence they arise and go abroad by night, veiled in thick mist, and utter their song with lovely voice, praising Zeus the aegis- holder and queenly Hera of Argos who walks on golden sandals and the daughter of Zeus the aegis-holder bright-eyed Athene, and Phoebus Apollo, and Artemis who delights in arrows, and Poseidon the earth-holder who shakes the earth, and reverend Themis and quick-glancing Aphrodite, and Hebe with the crown of gold, and fair Dione, Leto, Iapetus, and Cronos the crafty counsellor, Eos and great Helius and bright Selene, Earth too, and great Oceanus, and dark Night, and the holy race of all the other deathless ones that are for ever.

And one day they taught Hesiod glorious song while he was shepherding his lambs under holy Helicon, and this word first the goddesses said to me -- the Muses of Olympus, daughters of Zeus who holds the aegis:

(ll. 26-28) `Shepherds of the wilderness, wretched things of shame, mere bellies, we know how to speak many false things as though they were true; but we know, when we will, to utter true things.'

(ll. 29-35) So said the ready-voiced daughters of great Zeus, and they plucked and gave me a rod, a shoot of sturdy laurel, a marvellous thing, and breathed into me a divine voice to celebrate things that shall be and things there were aforetime; and they bade me sing of the race of the blessed gods that are eternally, but ever to sing of themselves both first and last.