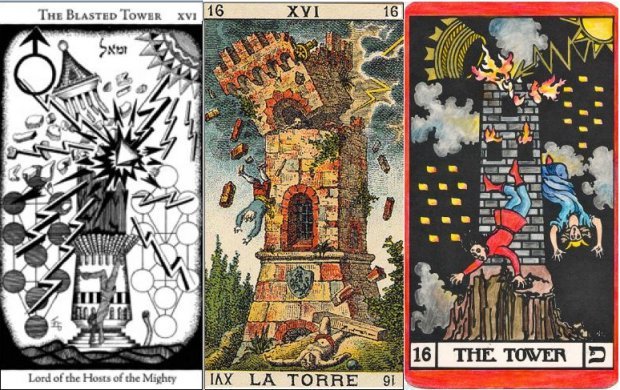 The Tower is in most Tarot packs number 16 of the Major Arcana. Usually there is lightning, falling figures and masonry and occasionally a falling crown - descending from the top of the Tower.  It is a card that, because it is not seen in the context of the overall symbol system, is frequently misrepresented from a spiritual point of view.  It is also mis-drawn in many recent packs.

A Tower is the symbolic equivalent of a Database or a Data store.  Every system has data, as such a Tower in the more generic sense is a database supporting a system.  The Tower shown in the Tarot is a human tower, it represents the vast stores of data we accumulate during our lives that hinder our progress - in effect it represents our belief systems.

I would like you to turn to the section on Memory in the concepts section.  This section provides lots of further links as to how memory is formed, and what is in memory.  It also shows that we know nothing.  We accumulate vast stores of information - knowledge - and think as a consequence that we 'know' things, we are clever men.  But being able to memorise what is essentially rubbish is not very clever.  And it is certainly not wise.

At the moment we are plagued by clever men.  If you turn for a moment to the  sections on Being mis-prescribed pharmaceuticals, and Home schooling, you will see that the two worst areas for cleverness are in the education system and in the medical community.  These two institutions have built a massive set of Twin Towers based on little more than belief.

The Tarot card is showing that those who build such Towers thinking that by doing so they are metaphorically reaching the sky - more clever than the Intelligences - are in for a fall - a nasty shock.

Spiritually, we get nowhere by building Towers.  The only way that we can progress spiritually is to get rid of the Towers and learn humility and wisdom.  There is a specific activity I have provided on the site that helps with this - Suppression of Memory.

I do not know whether the bombers of the twin Towers understood the symbolism of what they were doing, but I rather suspect their leaders did.  America has built vast edifices of knowledge and not wisdom.

The Twin Towers were a sort of physical representation of what America thought of itself - clever, better than the rest of the world, it knew a lot and could tell everyone how they should act.  They need vaccines and not local proven herbal medicine; they need artificial fertilisers and not crop rotation; they need meaningless TV programmes and not puppet theatre, books, poems, plays and local entertainment; they need pornography and not love; they needed cars and leaded petrol not trains, bicycles and horse and cart; they need more 'advanced' education systems based on their model, not the wisdom of the ages passed down from father and mother to child. The rest of the world needs the toxins we have created and the genetically engineered food we are creating.

America is clever but it is not wise and the bombing of the twin towers was a symbolic act.