At the more general level, a symbol of the Egg.  The outside hard layer is the Earth layer and inside is often found a soft inner layer, representing the spirit. 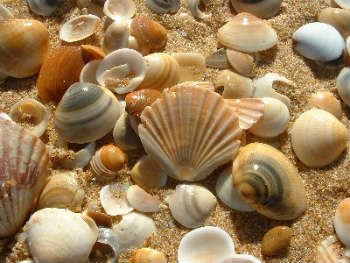 If the shell is a scallop shell, oyster shell or cockle shell, the symbolism is more complete as the inner mollusc has a yellow centre and an outer soft part and is thus more Egg like.

There is a connection here too with Pearl symbolism.

Some shells such as the scallop shell have a ridged exterior which can be seen to look like the cones.

Shells are found in Water.  They are also found often on the shore in sand.  So more symbolic connections.

If we now take the example of Venus, she was symbolically 'born out of a shell', that is from the Egg and thus born a goddess.

At a more individual level, however, the shell is a symbol of the form and function of all things, as such it can represent a bodied soul - a soul trapped in a human body.  The symbolism is simply a more specific version of the more general version described above.

Additional symbolism may be in operation if the shell is spiralling.  The snail shell is essentially a spiral and spirals can represent the spiral path taken up the cone of energy during the spiritual path.  But, the symbolism is not positive, as it signifies a path stalled, ‘ossified’ as Cirlot once said.