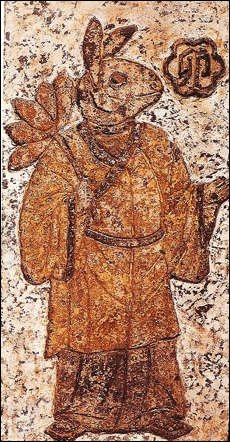 Guardian of the day – Han Dynasty

Rabbits take on a very obvious symbolism based on their defining characteristic – they are little sexual powerhouses.  And so we have ‘they were at it like rabbits’ or ‘he can bonk like a bunny’.  This is the general more worldly symbolism.  But spiritually a rabbit has an extended meaning based on this characteristic.

One meaning is that a rabbit is a person who practises sexual stimulation techniques in order to gain spiritual experience.  Generally speaking, they are thus charged with sexual energy but don’t release it until a defining moment – when they have enough for it to have an effect.

This is where the symbolism of the white rabbit popping out of the magician’s hat comes from.  White in this context is a creative force.

But here is a also a connection with MERCURY – the agent of change – who has as his symbols a rod with two snakes – symbol of kundalini energy, but also a rabbit.  MERCURY is symbolic of creation and destruction as such a rabbit – white or black is a symbol of that force.

So a tame white rabbit can be a symbol of creative power, a wild black rabbit a symbol of destructive energy.  There may also be a link with Black and White.