This belief in rock-dwelling spirits probably influenced the choice for the location of dozens of ancient rock paintings at another site in Ontario -  namely Mazinaw Rock, which rises out of Mazinaw Lake and extends for almost 2 km (1 mile) at an average height of 30 metres (100 feet).  The panels of rock paintings run along the base of the cliff a little above the water line; they were painted using red ochre (itself considered a sacred mineral), which is now somewhat faded.  The imagery mainly consists of abstract markings, but interspersed among them are some figurative forms, including the large eared jackrabbit spirit Nanabush, and human-like beings in a canoe, usually the sign of spirits in Native American rock art.

This site lies within Bon Echo Provincial Park, so named because the cliff-face produces remarkable echoes. (In summer, boat trips are given on the lake, so that visitors can experience the power of the Mazinaw  echoes).   The rock panels cluster where the echoes are strongest.

Algonquin shamans in trance considered that they could pass in spirit through rock surfaces to obtain 'rock medicine' or supernatural power from 'the men-within- the-rocks’. Indeed, this belief was held by many Native American peoples, and probably by other peoples around the world - it is known to have existed in southern Africa, for instance.

The foot of cliffs that rise out of water, as at  Mazinaw, was considered a favourite haunt of the rock manitous, which is interesting because such locations are also particularly effective in the propagation of echoes - the water surface acts as a kind of amplifier and transmitter. This was known thousands of kilometres away in Finland, as researchers discovered at three lakes in the Helsinki area:

Rocks displaying prehistoric carvings at the edges of these bodies of water were found to produce multiple echoes, and even echoes of echoes, especially when the sounds initiating them came from the lakes' surfaces. 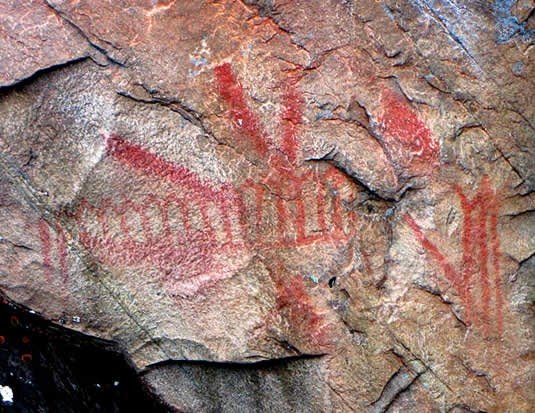