The symbolism of the Eye of God and an explanation for its existence is partly explained in both the description for Disks and the section on Eyes.

In spiritual travel, you may, if you are indeed extremely privileged, be taken to a very special portal.  It takes you through the Inward court and into the Inner court.

I do not know if there is more than one such portal.  Observations are quite few and far between and some observations merely describe what others have seen, which is helpful given the scarcity of observations, but is not the same as direct evidence.

The portal actually works like an eye - it opens and shuts - furthermore, it appears you need to be accompanied though to this inner sanctum, as the effect can be overwhelming - power of an inordinate nature.

Taisha Abelar – The Sorcerer’s Crossing
Clara held up a needle and, in spite of the dim light, she quickly threaded it.
‘Chinese sages of ancient times used to say that in order to know your worth, you have to slip through the eye of the dragon’ she said ’putting the two ends of the thread together.
She said that those sages were convinced that the boundless unknown is guarded by an enormous dragon whose scales shine with a dazzling light.  They believed that the courageous seekers who dare approach the dragon are awed by its blinding glare, by the power of its tail that with the minutest flicker crushes anything in its way, and by its burning breath that turns to ashes everything within its reach.  But they also believed that there is a way to step by that unapproachable dragon.  Clara said that they were confident that by merging with the dragon’s intent, one can become invisible and get through the dragon’s eye.

except that this is not the way - innocence, lack of desire, and lack of intent appear to be the best way.

23 Then said Jesus unto His disciples, “Verily I say unto you, that a rich man shall hardly enter into the Kingdom of Heaven.

24 And again I say unto you, it is easier for a camel to go through the eye of a needle, than for a rich man to enter into the Kingdom of God.” 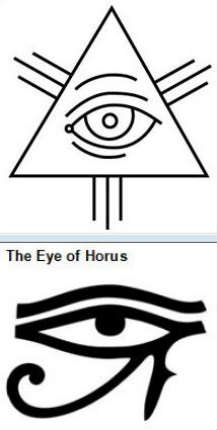 Also known as the ‘ Eye of Providence’ , or the all-seeing eye of God, the symbol itself is often shown in pictures as an eye surrounded by rays of light or a ‘glory’ and usually enclosed by a triangle. In the modern era, the most notable depiction of the eye is the reverse of the Great Seal of the United States, which appears on the United States one-dollar bill.

This picture is from a  Christian version of the Eye of Providence, and incorporates the triangle representing the Trinity.    In Medieval and Renaissance European iconography, the Eye (often with the addition of an enclosing triangle) was an explicit image of the Christian Trinity.

The same ‘eye of god’ is found in  Egyptian mythology as the  Eye of Horus. The symbol also appears in Buddhism, where Buddha is referred to as the "Eye of the World" in many Buddhist scriptures, for example, the  Mahaparinibbana Sutta.  It too is represented as a trinity in the shape of a triangle known as the Tiratna, or Triple Gem. 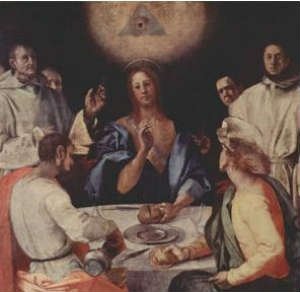 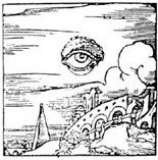 An alchemical woodcut showing the all-seeing eye of God floating in the sky.  The Eye first appeared as part of the standard iconography of the Freemasons in 1797, with the publication of Thomas Smith Webb's Freemasons Monitor.

In the Cao Đài  religion of Vietnam there are 36 levels of heaven and 72 planets, with number one being the closest to heaven and 72 nearest to Hell.   Earth is number 68. It is said that “even the lowest spirit at level 67 would not trade place with a king on 68” 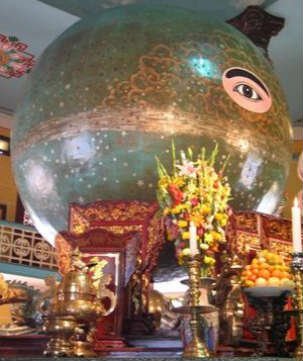 A bit of trivia 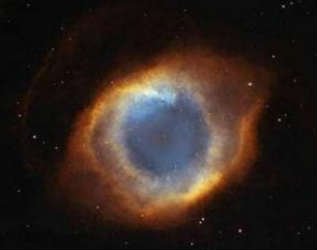 In one of the more bizarre recent discoveries by NASA's Hubble Space Telescope and at the Kitt Peak National Observatory in Arizona, a nebula – the Helix Nebula – has been found which the press have nicknamed ‘the Eye of God’.  It is described by astronomers as "a trillion-mile-long tunnel of glowing gases." At its centre is a dying star which has ejected masses of dust and gas to form tentacle-like filaments stretching toward an outer rim composed of the same material.  This is an authentic photograph composed from a number of images.