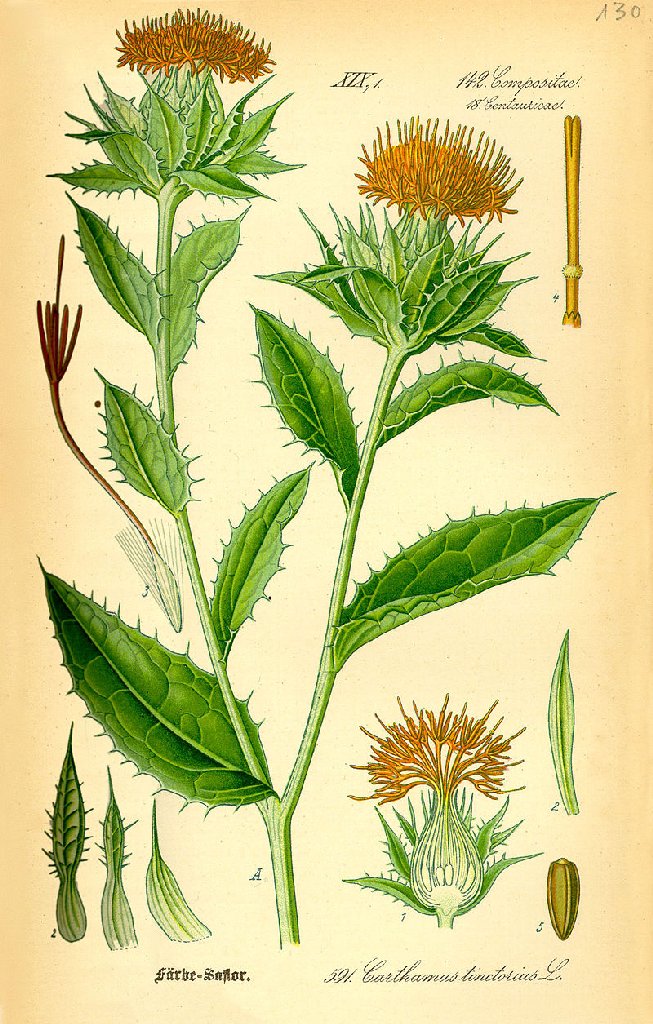 Other names include Sallflower, Beni, Chimichanga,  and in Pashto it is called Kareza (as it is found abundantly in Afghanistan and Tribal belts of Pakistan).

Traditionally, the crop was grown for its seeds, and used for colouring and flavouring foods, in medicines, and making red (carthamin) and yellow dyes, especially before synthetic aniline dyes became available. For the last fifty years or so, the plant has been cultivated mainly for the vegetable oil extracted from its seeds, although the plant has a multitude of uses.

It is a minor crop today, with about 600,000 tons being produced commercially in more than sixty countries worldwide.

India, United States, and Mexico are the leading producers, with Ethiopia, Kazakhstan, China, the Arab World, Argentina, Tanzania (Kibaigwa, Kongwa District) and Australia accounting for most of the remainder. 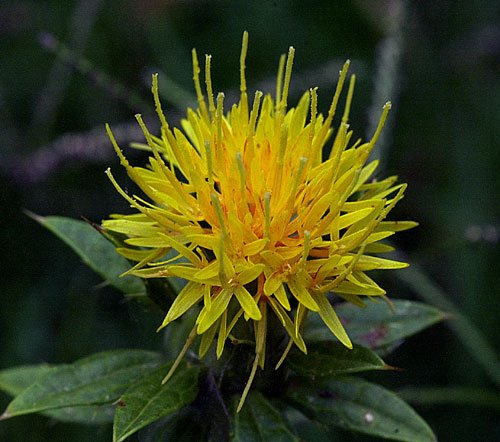 Plants are 30 to 150 cm (12 to 59 in) tall with globular flower heads having yellow, orange, or red flowers. Each branch will usually have from one to five flower heads containing 15 to 20 seeds per head.

Safflower is native to arid environments having seasonal rain. It grows a deep taproot which enables it to thrive in such environments.

Safflower seed is used quite commonly as an alternative to sunflower seed in birdfeeders, as squirrels do not like the taste of it.

Safflower is one of humanity's oldest crops. It is fairly clear from the records, however, that both seeds and flowers were used even in ancient times.  Chemical analysis of ancient Egyptian textiles dated to the Twelfth Dynasty identified dyes made from safflower, and garlands made from safflowers were found in the tomb of the pharaoh Tutankhamun. 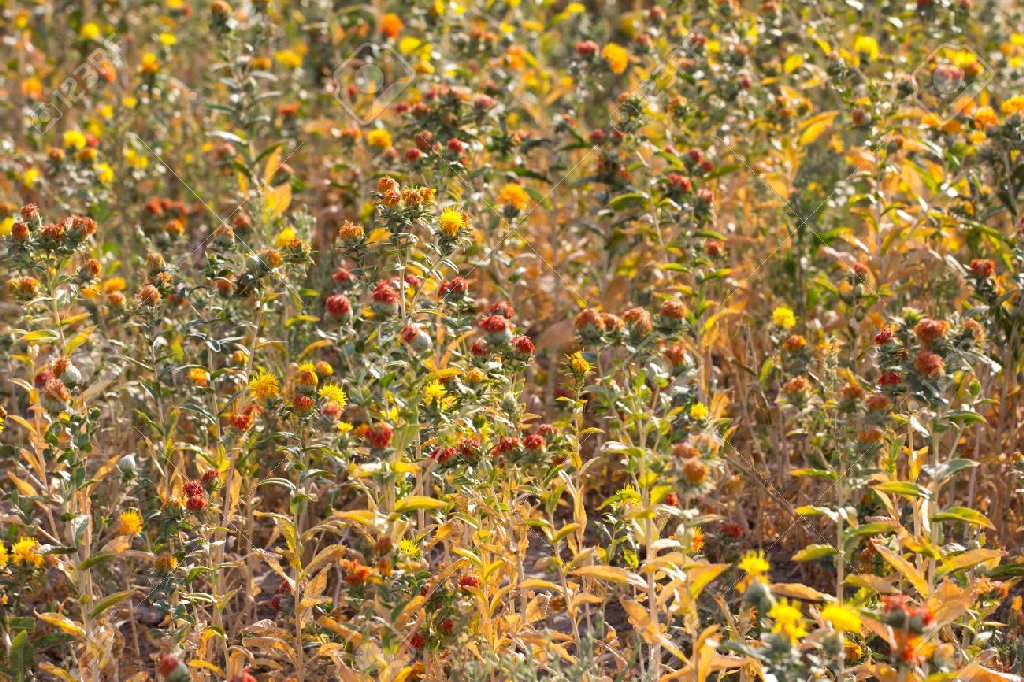 In colouring textiles, it is safflower's dried flowers that are used as a natural textile dye. The pigment in safflower is the benzoquinone-derived chemical carthamin and it is classified as a quinone-type dye. It is a direct dye which is also known as CI Natural Red 26. Yellow, mustard, khaki, and olive are the most common colours in textiles. Even bright reds and purples can be reached using alkaline processing. All hydrophilic fibres (all natural fibres, such as cotton, wool, etc.) may be dyed with this plant. Safflower was known as carthamine in the nineteenth century. 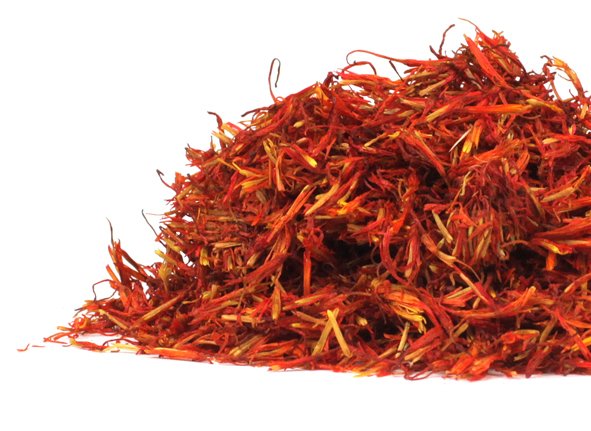 The Greek name for safflower κάρθαμος (kārthamos) occurs many times in Linear B tablets, distinguished into two kinds:

"The explanation is that there are two parts of the plant which can be used; the pale seeds and the red florets."  We shall explore this in the next section on medicinal uses

In dietary use, high-linoleic safflower oil has also been shown to increase adiponectin, a protein that helps regulate blood glucose levels and fatty-acid breakdown. During a 16-week, double-blind controlled study conducted at The Ohio State University, researchers …. studied post-menopausal women who had high blood sugar and wanted to lose weight. These participants showed an average reduction of 6.3 percent belly fat and an average of 20.3 percent increase in the important belly fat hormone, adiponectin.


For those who think that decreasing your cholesterol and eating safflower margarine is the answer to all your problems, however, think again:

Hornstra et al. analyzed a group where safflower oil replaced animal fats in the diets of people who had had a heart attack. The group receiving extra safflower oil in place of animal fats had a significantly higher risk of death from all causes, cardiovascular disease and coronary heart disease. As expected, increasing omega-6 linoleic acid from safflower oil in the Sydney Diet Heart Study significantly reduced total cholesterol; however, these reductions were not associated with [reduced] mortality outcomes. Moreover, the increased risk of death in the intervention group presented fairly rapidly and persisted throughout the trial. An updated meta-analysis of polyunsaturated fatty acid intervention trials showed trends toward increased risks of death from coronary heart disease and cardiovascular disease from increasing omega-6 linoleic acid intakes 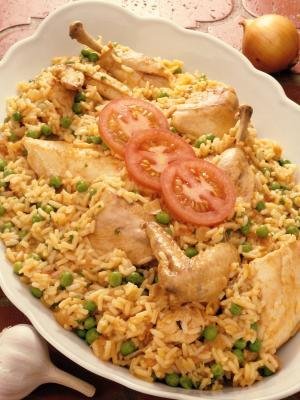 It isn't the linoleic acid that is the problem, it is the lack of cholesterol.

Cholesterol is used to repair cells, as such if you have a broken heart you need cholesterol.  It is also used to make our hormones and this is why reducing cholesterol and replacing it with oils that only decrease it further causes infertility, erectile dysfunction and lost libido.  Such is life.

BUT, if you look at Dr Duke’s analysis, it is the flowers which help with skin problems.  The flowers are also relatively rich in Selenium, which is a good mercury chelating agent – so if you have leaky amalgam fillings – the flowers help.

And it is the flowers that help with bacteria and parasites.  In fact overall, although the seeds do have medicinal properties, we find that the flowers are, if anything of more interest.  This makes it all the more ironic, as Safflower flowers are occasionally used in cooking as a cheaper substitute for saffron, and were sometimes referred to as "bastard saffron".

Dried safflower flowers (紅藍花 honglanhua, 草紅花 caohonghua, 刺紅花 cihonghua) are used in traditional Chinese medicine to alleviate pain, increase circulation, and reduce bruising. They are included in herbal remedies for menstrual pain and minor physical trauma. In India, the flowers are used for their laxative and diaphoretic properties, and are also used for children's complaints of measles, fevers and eruptive skin conditions.

So I am afraid we misled you slightly, tempting you in,  by using the heading safflower seeds, as medicinally safflower flowers are really the main ingredient here. 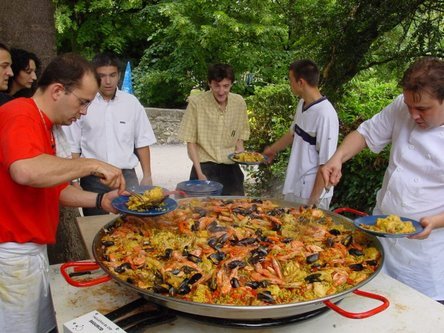 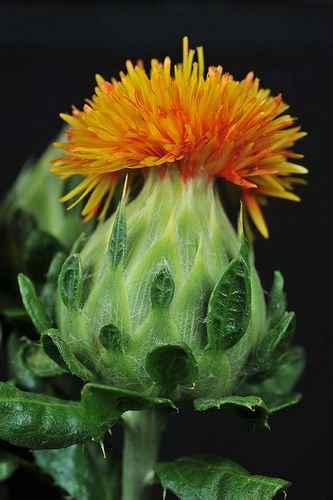 Safflower seed oil is flavourless and colourless. It can be used mainly as a cooking oil in very delicately flavoured food.  In culinary use, safflower oil compares favourably with other vegetable oils with its high smoke point.  So, for example, it is probably quite a good oil for tempura dishes.

The flowers don't really have any flavour as such, but as they are so important nutritionally and medicinally it is worthwhile exploring how they can be used in food.  And of course the main way is to use their colour.

Buttery rice, with raisins and nuts with added safflower threads looks lovely and is tasty.  Add the threads to the rice along with butter in a heavy casserole dish, pour on  1-2 cups water to every half cup of rice.  Then cook slowly in the oven until the rice has absorbed the water and the butter.  There should be a crust on the bottom [very tasty].  Add the raisins and nuts as the final step.  Serve with grilled meats and a green salad. 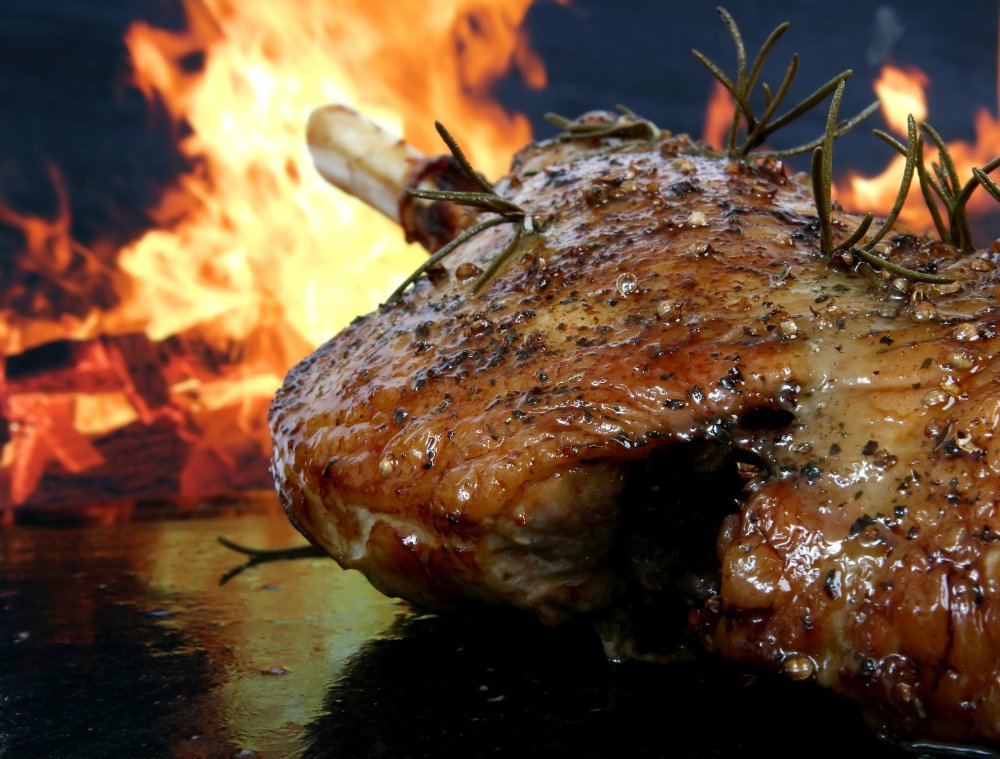 Dried safflower flowers appear occasionally in Mediterranean herb mixes, and have been used in Middle Eastern cooking. They are quite common in the cuisine of the Caucasus state Azərbaycan (Azerbaijan), where they help to improve the colour of broths, soups and stews, without being expected to contribute any flavour.

A rather typical example for an Azərbaijani recipe employing safflower is piti [пити], particularly in the Northern variant common around beautiful Şəki town (Şəki pitisi [Шәки питиси]). This is a kind of nourishing soup prepared in single serving-sized portions: It is made from mutton, fried onions together with chickpeas, and safflower flowers, which are all cooked inside of a small clay pot; often, the recipe is augmented with fresh or dried fruits, nuts or chestnuts.

Grind the flowers with your fingers first until they are almost powdered then toast them in a dry pan  for a few minutes until the flowers begin to release their aroma, then add  butter, olive oil,or bacon fat depending on your preference to dampen the fibers  then continue to brown for maybe 2 minutes. This provides flavour, colour & helps to eliminate the chewiness in some of the fibres.

Now add short grain/arborio rice and gradually add ladlefuls of stock, as you would do a risotto.  Once the rice is soft but still has texture you can now add any flavourings you want - sliced grilled red peppers, cooked peas, cooked beans, cooked diced chicken, fried onion, black olives,  and for a final flourish cooked prawns and cooked mussels to make a sort of paella. 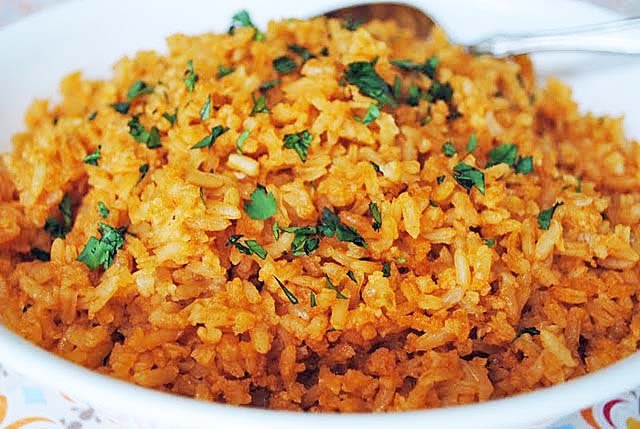 This cur is served with plain basmati rice.  The dish can be sprinkled with toasted slivered almonds before serving.  It goes well with a sharp raiti and chutneys, as wellas a green salad or plain boiled green beans 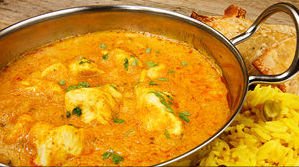