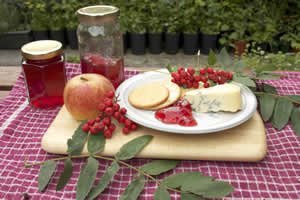 Sorbus aucuparia, commonly called rowan and mountain-ash, is a species of deciduous tree or shrub in the rose family. It is a highly variable species, and botanists have used different definitions of the species to include or exclude trees native to certain areas; a recent definition includes trees native to most of Europe and parts of Asia, as well as northern Africa. The range extends from Madeira and Iceland to Russia and northern China. Unlike many plants with similar distributions, it is not native to Japan.

It blossoms from May to June in dense corymbs of small yellowish white flowers and develops small red ‘pomes’ [berries] that ripen from August to October and are eaten by many bird species. The plant is undemanding and frost hardy and colonizes disrupted and inaccessible places as a short-lived pioneer species.

And the Mountain ash’s berries have healing properties, long recognised in folk medicine, but only now being confirmed by scientists analysing the plant’s properties.  Some of these healing properties are exceptionally important as you will see from the observations.

We have a tendency to think of the Mountain Ash as a wild tree, or if you have  it in your garden [as we do] as a semi domesticated wild tree.  But in many European countries as well as Russia, work has been underway for many years to produce a less tart berry and a completely domesticated commercial tree.

The robust qualities of S. aucuparia made it a useful source for fruit in harsh mountain climates and Maria Theresa of the Habsburg Monarchy recommended the planting of the species in 1779.  An edible variety, named Sorbus aucuparia var. dulcis Kraetzl, or var. edulis Dieck, or var. moravica Dippel, was first discovered in 1810 near Ostružná in the Hrubý Jeseník mountain range of Northern Moravia and became widespread in Germany and Austria in the early 20th century.

Similar non-bitter varieties found in Southern Russia were first introduced into Central Europe in 1900 as 'Rossica' and 'Rossica Major', which has large fruit up to 1.5 cm in diameter.  Two widespread cultivars of the Moravian variety are 'Konzentra' and 'Rosina', which were selected at the beginning of 1946 by the Institut für Gartenbau Dresden-Pillnitz, an agricultural research institute in Saxony, from 75 specimens found mostly in the Ore Mountains, and made available in 1954.  Fruit of the more widely used 'Konzentra' are small to medium-sized, mildly aromatic and tart, easier to transport because of their thicker peel, and used for juicing, while fruit of 'Rosina' are larger, sweet and tart, and aromatic, and candied or used in compote.   In 1905, Russian botanist Ivan Vladimirovich Michurin began to crossbreed common S. aucuparia with other species to create fruit trees. His experiments resulted in the cultivars 'Burka', 'Likjornaja', 'Dessertnaja', 'Granatnaja', 'Rubinovaja', and 'Titan'.

Rowanberries in folk medicine were said to be “ laxative, diuretic, cholagogue, and to prevent scurvy” all of which were probably true as the berries contain vitamin C.  The fruit contains sorbitol, which can be used as a sugar substitute by diabetics.  The fruits have been used in traditional Austrian medicine for some time as a tea, syrup, jelly or liqueur for the treatment of disorders of the respiratory tract, fever, infections, colds, flu, rheumatism and gout.  Again science is beginning to catch up here and realise that there is good evidence to show that folk medicine was right, Rowanberries have antibacterial action.

Other medicinal uses in folk medicine were ‘lack of appetite or an upset stomach, against rheumatism and kidney disease, and as a gargled juice against hoarseness.’  As many so called autoimmune diseases appear to be caused by viruses and bacteria, and rowanberries are now being found to be antibacterial, there may be evidence emerging that folk medicine was right here too.

Sweet rowanberry cultivars adapted to northern climates have been developed from rowanberries (Sorbus aucuparia L.) and hybrids of rowanberry with Malus, Pyrus, Aronia, or Mespilus. The rowanberries studied here (cvs. Burka, Dessertnaja, Eliit, Granatnaja, Kubovaja, Rosina, Rubinovaja, Titan, and Zholtaja) have high antioxidant and phenolic contents. The phenolic content varied between 550 and 1014 mg/100 g of fresh weight in sweet rowanberries, whereas 846 and 717 mg were found in the well-characterized bilberry and lingonberry, respectively. Anthocyanins (6-80 mg) were mainly found from berries of hybrid cultivars. Of the other phenolics, chlorogenic (29-160 mg) and neochlorogenic (34-104 mg) acids constituted the major fraction in all rowanberries, the concentrations almost equaling those present in coffee. Antioxidant capacities of rowanberries were high, as measured with FRAP (61-105 micromol of Fe2+/g) and DPPH (21.3-9.7 g/g DPPH) methods. Principal component analysis was able to separate the cultivars of different origin into clusters on the basis of their phenolic profiles.  PMID:  16390186

You cannot eat Rowanberries straight from the tree.  The berries taste bitter and astringent.  So the method is to cook them and make them into either a jam, jelly, or sauce to go with ice cream or yoghurt.  The more domesticated ones can also be made into a tea.

There is quite a good recipe for Rowanberry jelly on the Corrarie Cottage website, if this link disappears, then the following recipe may be helpful

Take 3 pounds of ripe rowan berries; pick the berries over, wash them, place in a preserving pan with just enough water to prevent burning.  Cook slowly until the berries are reduced to a pulp.  Strain through a jelly bag.
Next take 3 pounds of crab apples, wash and quarter.  Barely cover with water, then boil gently until soft and pulpy.  Strain.  Mix both juices and to every pound of juice add 1 pound of sugar.  Boil rapidly for 20 to 30 minutes or until the jelly sets when tested on a cold plate.  This is a firm broght pink jelly, with a delightful piquant flavour

There are also additional recipes that use sloes instead of the crab apples.

Farmhouse fare - recipes from country housewives collected by Farmer's Weekly
Rowanberry wine
When the berries are perfecly ripe is the time to make this delicious wine.  To each quart of berries ass 1 quart boiling water and a small piece of bruised whole ginger.  Let them steep for 10 days; well stir each day, then strain and to each quart of liquid add 1 pound of loaf sugar.  When dissolved put in a demi-john to ferment.  When fermentation has finished, bottle tighly [note: wine yeast can be added to help the fermentation process]