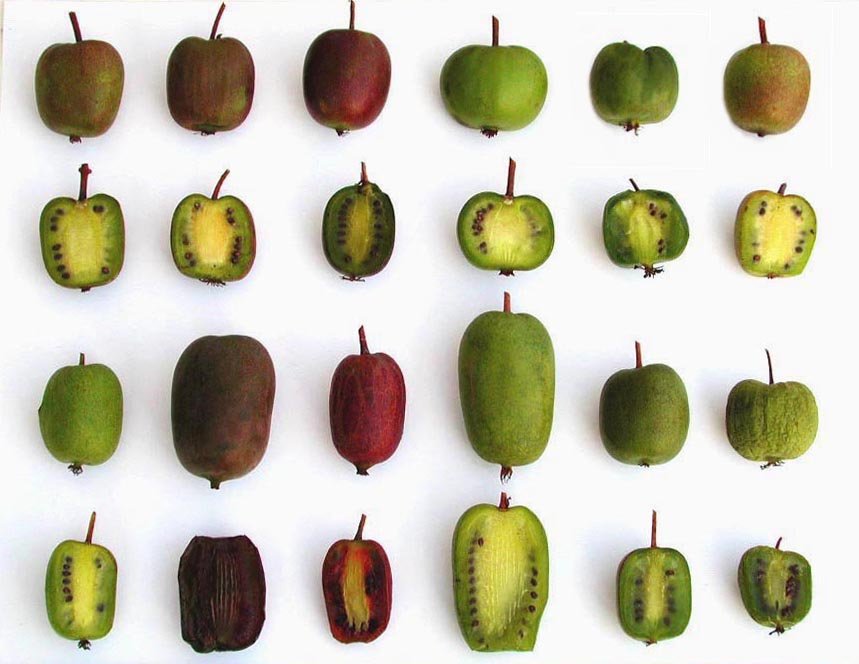 The kiwifruit or Chinese gooseberry, is the edible berry of a woody vine in the genus Actinidia.  Kiwifruit is native to northern China. Other species of Actinidia are native to India, Japan, and southeastern Siberia, but these days it is a commercial crop in several countries.

The genus Actinidia contains around 60 species. Though most kiwifruit are easily recognized as kiwifruit, their fruit is quite variable. The skin of the fruit can vary in size, shape, hairiness, and colour. The flesh can vary in colour, juiciness, texture, and taste. The most common kiwifruit is the fuzzy kiwifruit, from the species A. deliciosa. Other species that are commonly eaten include golden kiwifruit (A. chinensis), Chinese egg gooseberry (A. coriacea), baby kiwifruit (A. arguta), Arctic kiwifruit (A. kolomikta), red kiwifruit (A. melanandra), silver vine (A. polygama), and purple kiwifruit (A. purpurea).

The golden kiwi (Actinidia chinensis) has a smooth, bronze skin, with a beak shape at the stem attachment. Flesh color varies from bright green to a clear, intense yellow. This species is sweeter and more aromatic in flavor; the flavor is reminiscent of some subtropical fruit. Its short storage life currently limits its commercial potential. One of the most attractive varieties has a red 'iris' around the center of the fruit and yellow flesh outside. 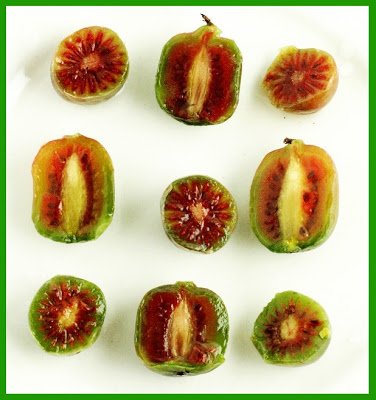 They are fast-growing, climbing vines, durable over their growing season. The fruits are edible berry- or grape-sized fruits similar to the fuzzy kiwi in taste and appearance, with thin, smooth skin.

They are referred to as kiwi berry, baby kiwi, dessert kiwi, grape kiwi, or cocktail kiwi. 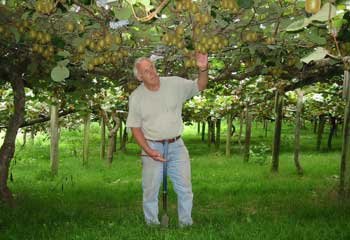 In Italy, the infrastructure and techniques required to support grape production have been adapted to the kiwifruit. This, coupled with being very close to the European kiwifruit market, led to Italians becoming the leading producer of kiwifruit. The growing season of Italian kiwifruit does not overlap much with the New Zealand or the Chilean growing seasons, therefore direct competition between New Zealand or Chile was not much of a factor.  Although kiwifruit is a national fruit of China, until recently, China was not a major producing country of kiwifruit, as it was traditionally collected from the wild.

Origins - Cultivation of the fuzzy kiwifruit spread from China in the early 20th century to New Zealand where the first commercial plantings occurred. The fruit was called "yang tao" but was changed to "Chinese gooseberry" by the New Zealanders. It proved popular with American servicemen in New Zealand during World War II. Because of this the fruit was exported to California using the names "Chinese gooseberry" and "melonette". Because the California based importer rejected these names the fruit was re-branded "kiwifruit".

Almost all kiwifruit sold belong to a few cultivars of fuzzy kiwi (Actinidia deliciosa): 'Hayward', 'Blake', and 'Saanichton 12'. They have a fuzzy, dull-brown skin, and bright-green flesh. The familiar cultivar 'Hayward' was developed by Hayward Wright in Avondale, New Zealand, around 1924.

Allergies - The actinidain found in kiwifruit has been found to be an allergen for some individuals.  Specifically, people allergic to latex, bananas, papayas, or pineapples are likely to also be allergic to kiwifruit.  This is an intriguing finding, because food allergies are very often caused by vaccines because of the excipient in the vaccines, thus some vaccines must contain a latex like product.

And what do we find?  That some vaccines are prefilled syringe vaccination products, and the tip cap and the rubber plunger of the needleless prefilled syringes contain dry natural latex rubber, so this is why the allergies are developing here, for more details see the food allergy and vaccine sections.

Comparison of kiwis and kiwi berries

Dr Duke has no entry on his database for kiwi fruit, so all the chemical constituents cannot be listed, the tables below are derived from the USDA Nutrients database. 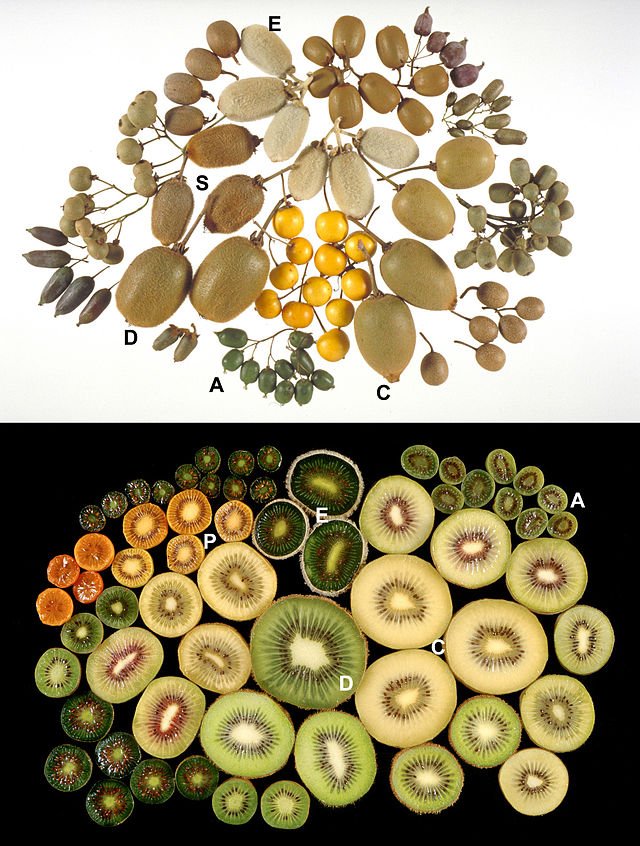 Do not eat the peel!  There are some loony fringe groups who think it is funny to spread the word that the skin is full of good things and a natural laxative - but it isn't and the hairs are an irritant.  My cleaner of former times believed them and tried to eat the peel - she was not well.  Still she did find out that the hairs on a kiwi fruit can be felt in your gastro-intestinal system for far longer than you would ever imagine possible - even when they leave you for ever to be flushed down the loo.  She said it was like having a vacuum cleaner brush and I quote "stuffed up yer arse".

Raw kiwifruit is rich in the protein-dissolving enzyme actinidain (in the same family of thiol proteases as papain), which is used commercially as a meat tenderizer. Actinidain thus makes raw kiwifruit unsuitable for use in desserts containing milk or any other dairy products which are not going to be eaten fairly quickly, because the enzyme soon begins to digest milk proteins. This applies to gelatine-based desserts, as well, as the actinidain will dissolve the proteins in gelatine very quickly, either liquifying the dessert, or preventing it from solidifying.

Keep it simple.  One way to eat them is to slice the top off and eat them with a teaspoon, putting them in an egg-cup makes it more fun for children. 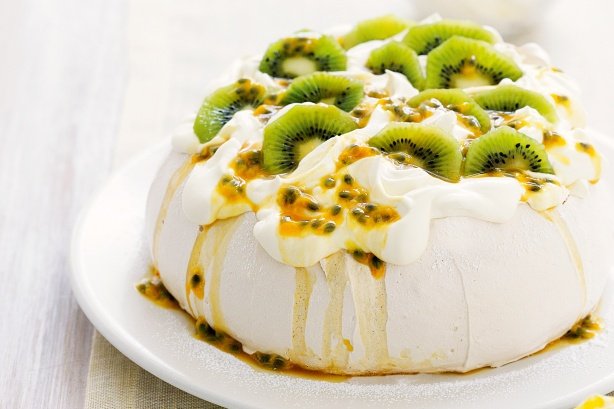 They are very nice in fruit salads and go well with sliced preserved ginger.  They make a delicious topping to a pavlova, as long as you put them on the cream just before serving, for the reasons above.

They go well in savoury salads, for example, rocket or watercress, kiwi fruit and toasted pine nuts with grilled liver is delicious.

They make an interesting addition to a green salsa - chopped spring onions, a little sugar and lemon juice, kiwi fruit and finely chopped green or yellow peppers, with chopped coriander or mint as an optional extra. 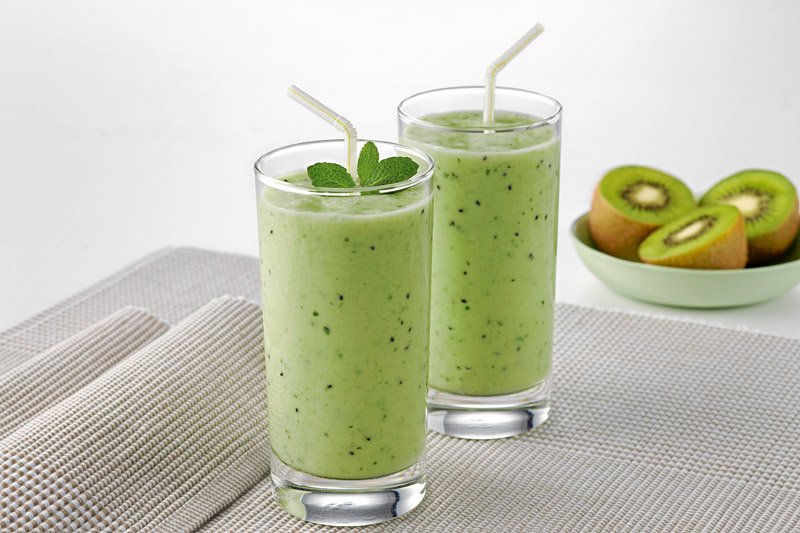