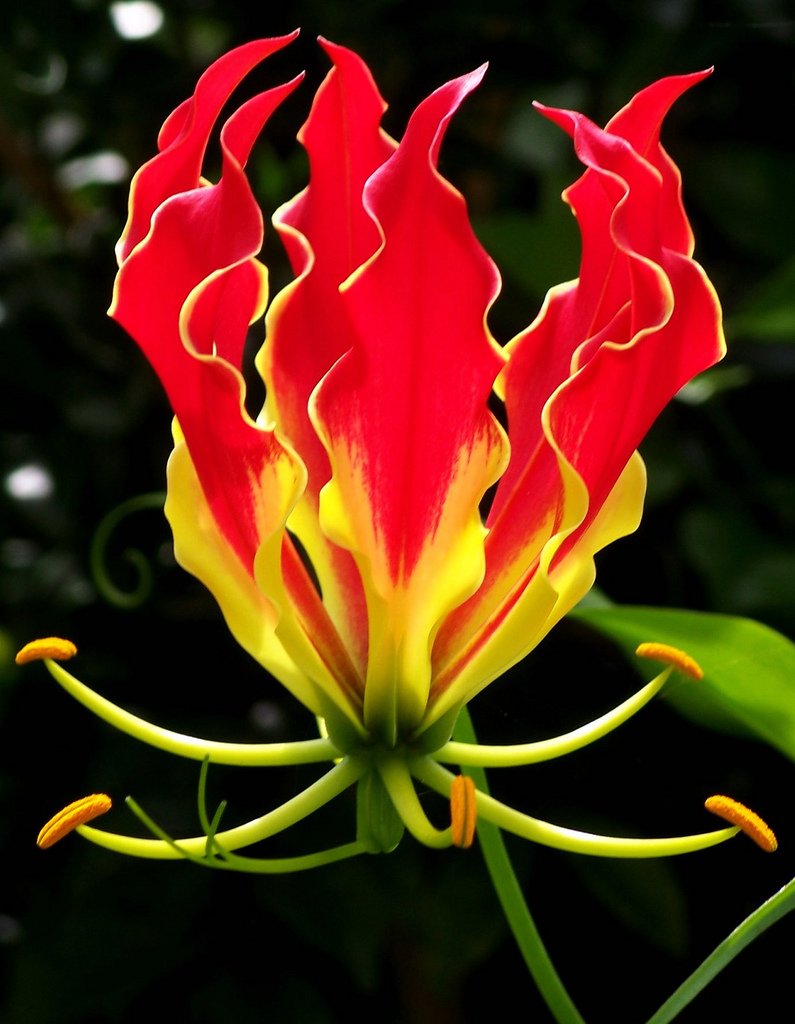 Gloriosa superba is a species of flowering plant in the family Colchicaceae.

It is the national flower of Zimbabwe and also the state flower of Tamil Nadu. In 1947, Queen Elizabeth II received a diamond brooch in the shape of this flower for her twenty-first birthday while traveling in what was then Rhodesia. 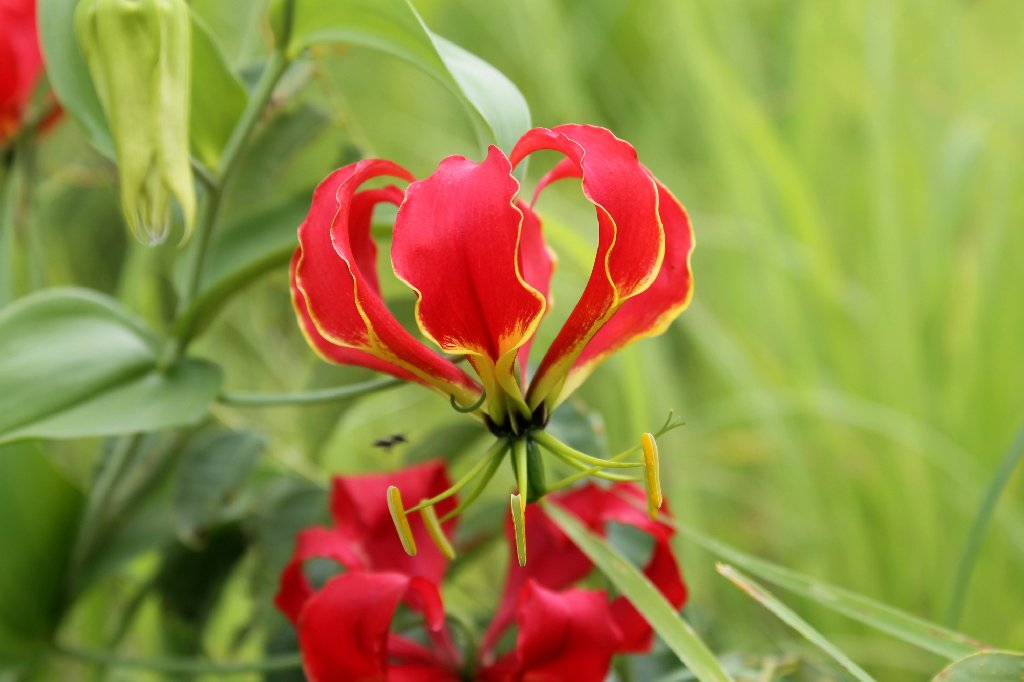 Gloriosa superba is a perennial herb growing from a fleshy rhizome. It climbs using tendrils, the stem reaching 4 meters long. The leaves are mainly alternately arranged, but they may be opposite, as well. They are somewhat lance-shaped and tipped with tendrils, and they are up 13 to 20 centimeters long.

The gorgeous flower has six tepals each up to 5 to 7.6 centimeters long. They are generally bright red to orange at maturity, sometimes with yellowish bases. The margins may be quite wavy. The six stamens also are long, up to 4 centimeters, and each bears a large anther at the tip that drops large amounts of yellow pollen. The style may be more than 6 centimeters long. One flower may weigh over 2.5 grams. 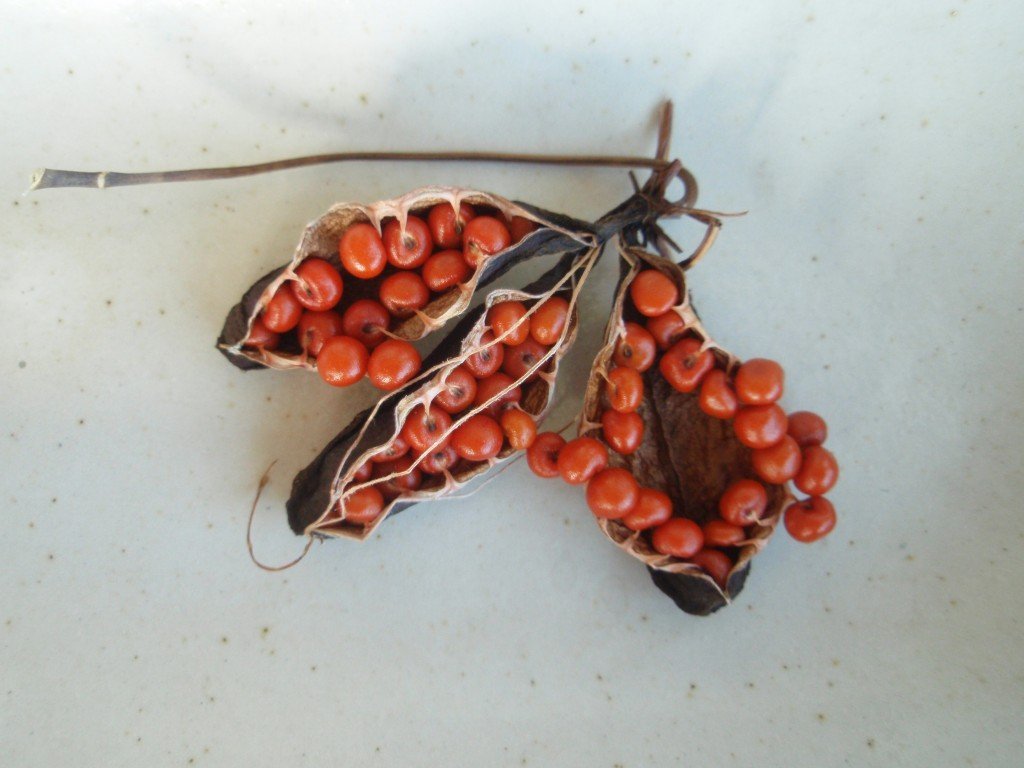 The fruit is a fleshy capsule up to 6 to 12 centimeters long containing red seeds.

Cultivars of this popular garden plant may vary from these wild-type characteristics; the cultivar 'Lutea' has all-yellow tepals, 'Citrina' is yellow with red markings, and 'Nana' is a dwarf. Whitish forms are known, as well.

The plant is pollinated by butterflies and sunbirds. It grows in many types of habitat, including tropical jungles, forests, thickets, woodlands, grasslands, and sand dunes. It can grow in nutrient-poor soils and be found at as high as 2500 meters in elevation. 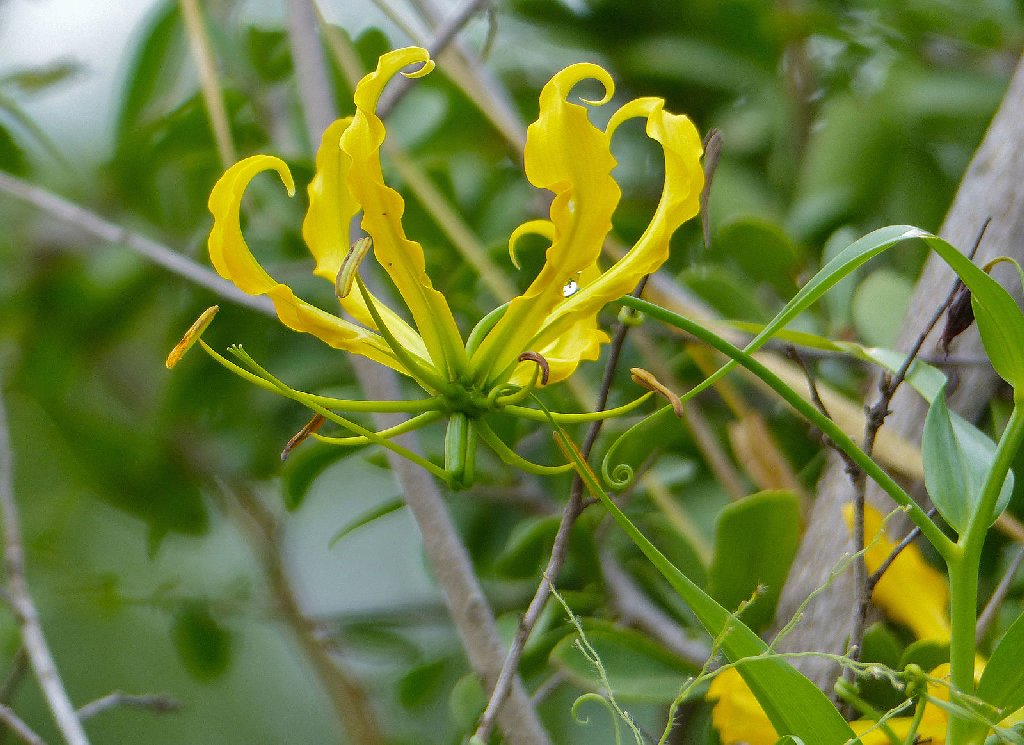 In general, this plant is common in the wild. It is in great demand for medicinal use, so it is cultivated on farms in India, but most plant material sold into the pharmaceutical trade comes from wild populations. This is one reason for its decline in parts of its native range.

In Sri Lanka it has become rare, and in Orissa it is thought to be nearing extinction. On the other hand, it has been introduced outside its native range and has become a weed which may be invasive. In Australia, for example, it now can be found growing in coastal areas of Queensland and New South Wales. It also is cited as an invasive species in the Cook Islands, French Polynesia, Kiribati, and Singapore. 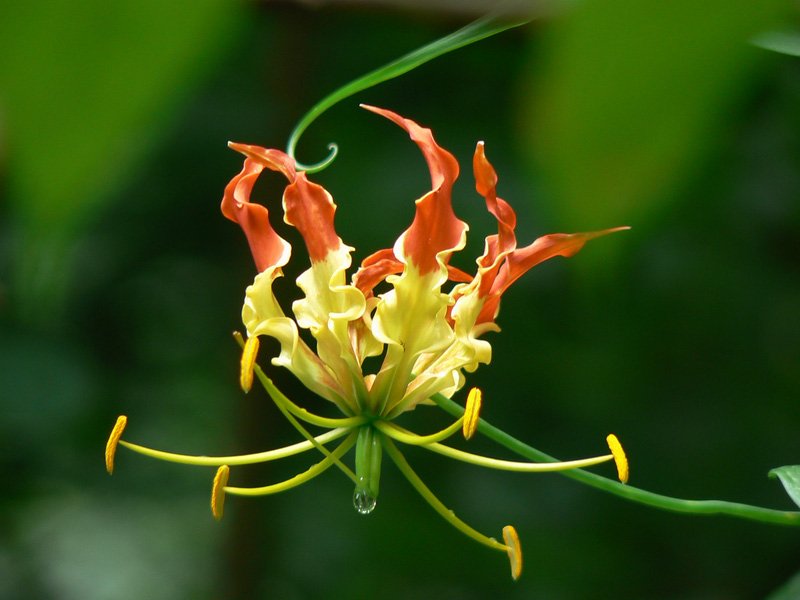 Gloriosa superba is poisonous, toxic enough to cause human and animal fatalities if ingested.  Every part of the plant is poisonous, especially the tuberous rhizomes.

The key appears to be the dose, but also the part of the plant used. Dr Duke's analysis [see observations] covers only the plant, but traditional medicine uses the seeds, and considerable preparation is needed on the seeds

Ingesting the plant and not the seeds

The following comes directly from Wikipedia

Within a few hours of the ingestion of a toxic amount of plant material, a victim may experience nausea, vomiting, numbness, and tingling around the mouth, burning in the throat, abdominal pain, and bloody diarrhea, which leads to dehydration. As the toxic syndrome progresses, rhabdomyolysis, ileus, respiratory depression, hypotension, coagulopathy, haematuria, altered mental status, seizures, coma, and ascending polyneuropathy may occur. Longer-term effects include peeling of the skin and prolonged vaginal bleeding in women. Colchicine is known to cause alopecia. One case report described a patient who accidentally ate the tubers and then experienced hair loss over her entire body, including complete baldness. Poisonings can occur when the tubers are mistaken for sweet potatoes or yams and eaten. The plant can be dangerous for cats, dogs, horses, and livestock, as well.

Colchicine in particular but also a number of other chemicals in Glory Lily seeds have anti-viral activity, quite potent anti-viral activity.  We have included an analysis of the plant from Dr Duke that shows that the plant is active against some very tough viruses.  Whether the seeds are active against these same viruses remains to be discovered, but some preliminary studies seem very promising.

The plant [seeds] has long been used as a traditional medicine in many cultures and it has been used in the treatment of virus induced arthritis, cholera, typhus, leprosy, smallpox, sexually transmitted diseases, and many types of internal parasites. Tough pathogens often need tough treatment.

Pericarditus can be caused by viruses.  In recent studies colchicine has been tested to see if it can help.

We have included other observations to show that potentially this plant's seeds are exceptionally important medicinally.