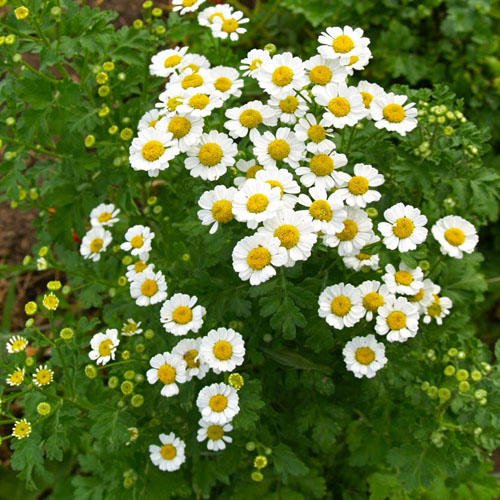 Tanacetum parthenium, the feverfew, is a traditional medicinal and ornamental herb in the family Asteraceae.  It is commonly seen in the literature by its synonyms, Chrysanthemum parthenium , Matricaria parthenium L. and Pyrethrum parthenium and its common names bachelor's buttons or featherfew.

The word "feverfew" derives from the Latin word febrifugia, meaning "fever reducer. It was documented in the first century (AD) as an anti-inflammatory by the Greek herbalist physician Dioscorides.

Parthenium hysterophorus is a species of flowering plant also in the aster family, Asteraceae. It is native to the American tropics. 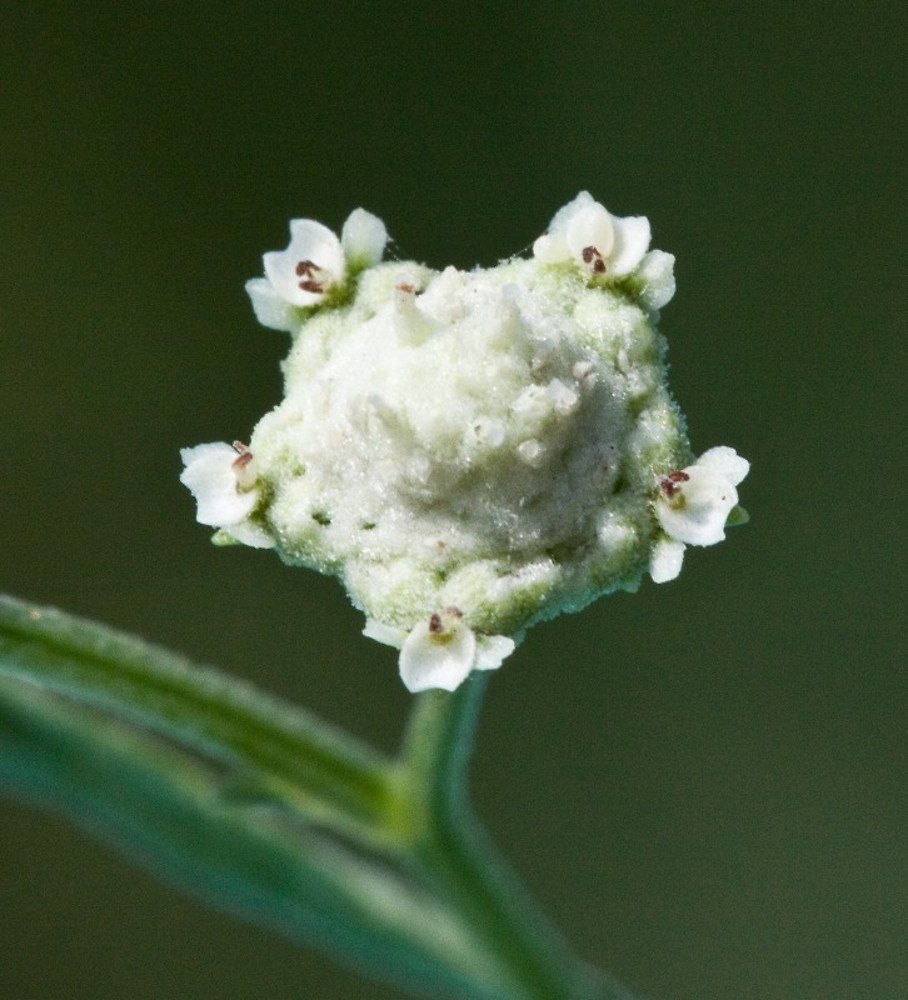 Common names include Santa Maria feverfew or simply Feverfew. And we find that Feverfew is a name that has been applied to other plants in the Asteraceae family.

The Asteraceae or Compositae family is an exceedingly large and widespread family of flowering plants.

The family has more than 23,600 currently accepted species.  They have different properties and do different things.

From what we can see this is causing great confusion and some properties being attributed to the Feverfew described on this page are more correctly applied to other Feverfews! 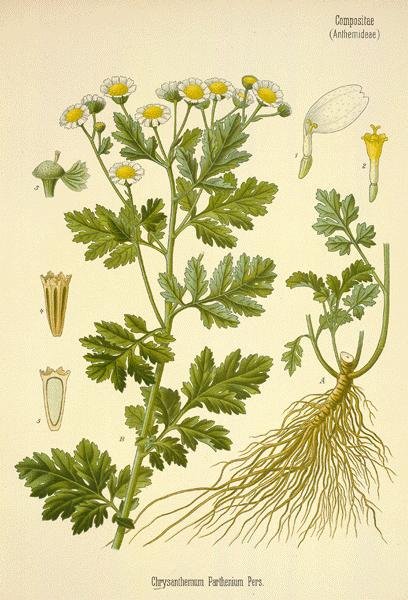 Feverfew is a perennial herb, which thrives in full sun, It is hardy to USDA zone 5 (−30 °C (−22 °F)). Feverfew is herbaceous in habit and once planted needs practically no looking after.   In cultivation, it benefits from being cut back to the ground in the autumn.  It spreads rapidly, and will cover a wide area after a few years.

Feverfew grows into a small bush up to around 46 cm (18 in) high.  In good conditions it may grow up to 61 cm (24 in) tall.  According to Mrs Grieve ‘The whole plant has a strong and bitter smell, and is particularly disliked by bees’.

The small, daisy-like heads of yellow flowers have outer white rays, the central yellow florets being arranged on a nearly flat receptacle, not conical as in the chamomiles. A double variety is cultivated in gardens for ornamental purposes, and its flower-heads are sometimes substituted for the double Chamomile.

The stem is finely furrowed and hairy, about 2 feet high.

The leaves alternate, downy with short hairs, or nearly smooth-about 4 1/2 inches long and 2 inches broad - bipinnatifid, with serrate margins, the leaf-stalk being flattened above and convex beneath.

Feverfew was native to Eurasia; specifically the Balkan Peninsula, Anatolia and the Caucasus, but cultivation has spread it around the world and it is now also found in the rest of Europe, North America and Chile.  Outside of its native range it can become an ‘invasive weed’. 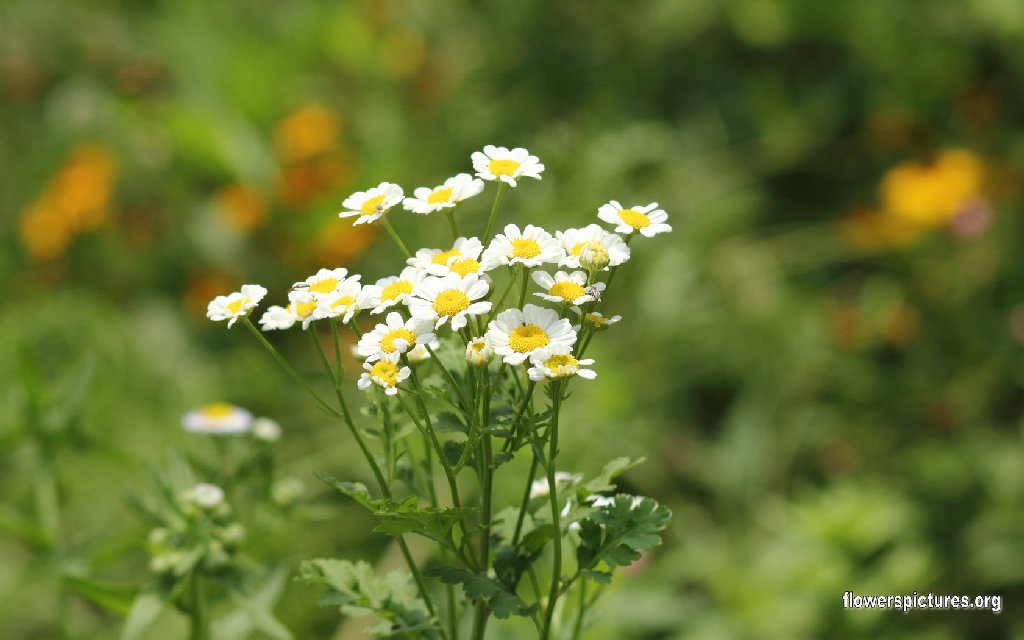 Tanacetum parthenium is now used to treat headaches and migraine.

Headaches in particular can have multiple causes, as such Feverfew is referred to as a ‘non specific’, meaning it has not been allocated to a cause, but is more symptom related.  As traditional medicine is intended to be cause based and not symptom based, a plant allocated to symptoms is not ideal, but the reason for its efficacy in certain circumstances may simply be due to the fact it is a ‘blood thinner’, it has anti aggregate properties, as such it may help via this temporary process to reduce the pressure in the arteries and veins in the head.

Mrs Grieve makes no mention of either headaches or migraine which is interesting as she was more interested in ‘specifics’.

Traditionally it was used as an Emmenagogue (also spelled emmenagog)  - a herb which stimulates blood flow in the pelvic area and uterus; it may stimulate menstruation.  This use seems consistent with its anti-aggregate ability. 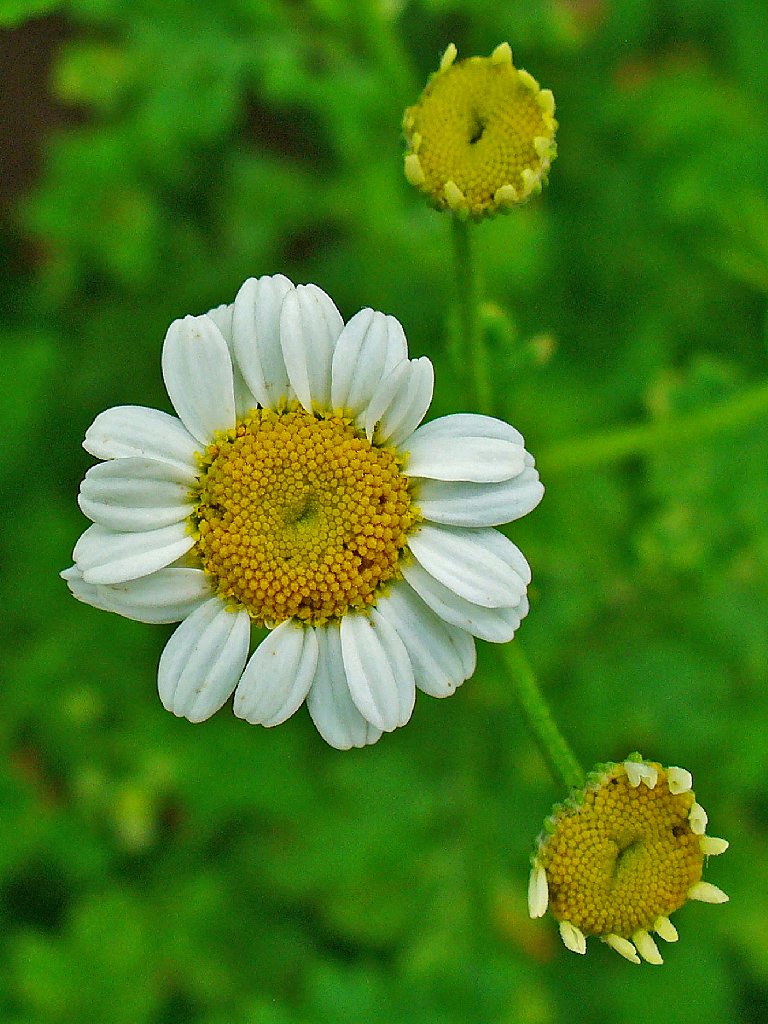 Some USA based pharmaceutical companies who have seen a market in this area, have started to promote feverfew as a ‘preventer’ of migraines.  This may be dangerous marketing. Prevention implies regular and long term use - back to the old money spinning pharms model.   ‘Prevention’-  if it is indeed achieved-  is being caused by blood thinning and blood thinning is potentially very dangerous – any wounds will not clot and there is the risk of haemorrhage.  A Cochrane review came to the conclusion that:

There is insufficient evidence from randomised, double-blind trials to suggest an effect of feverfew over and above placebo for preventing migraine.  PMID: 14973986

One of the most obvious applications for feverfew seems to be being overlooked and that is in the treatment of thromboses and embolisms, possibly even strokes.

Cardiovascular disease (CVD) is the leading cause of death worldwide. Platelet activation and aggregation play a central role in hemostasis and thrombosis. Herbal medicines have been traditionally used in the management of CVD and can play a role in modifying CVD progression, particularly in platelet function, and have the potential of altering platelet function tests, as well as some coagulation parameters. Herbal medicines, such as feverfew, garlic, ginger, ginseng, motherwort, St John's wort, and willow bark, were found to reduce platelet aggregation.  PMID:  25839871

As is consistent with all blood thinners, at overdose levels, they become toxic - Cardiotoxic 18,000 mg/man/day.  It should also be obvious that taken on a frequent basis, the body will adjust and simply go back to producing even thicker blood to compensate.  Thus any withdrawal will be extremely dangerous.  There will be blood clots, strokes,  headaches and migraines as a consequence.  Medicine is medicine - for one off or very short application only.

One unusual chemical in feverfew is Parthenolide.  According to Dr Duke, it is amongst other things,  Anticancer and Antitumor.  One specific type of cancer so far identified with Feverfew is leukemia:

Malignant stem cells are central to the pathogenesis and perpetuation of acute myelogenous leukaemia (AML). Despite their crucial role, standard chemotherapy often does not target these critical cells … parthenolide, which is derived from the medicinal plant feverfew, has recently been shown to preferentially induce AML stem cells to undergo apoptosis. Importantly, parthenolide had no discernable effect on normal blood cells. Thus, this naturally occurring agent may provide new avenues of investigation for the treatment of leukaemia.  PMID:  16120045

The phrase “provide new avenues of investigation” is key.  We have provided other observations related to cancer, but the same holds true.

Despite the fact that it is early days, a rash of supplements simply containing parthenolide but calling themselves ‘feverfew supplements’ has appeared claiming to cure cancer.  According to Wikipedia “content varies substantially, by over 40-fold, despite labeling claims of standardization". And also “A study found that the actual parthenolide content of these supplements bore little resemblance to the content claimed on the product label.”

The observations below show a number of other promising areas being studied for this plant.

Vitamin C, Selenium and Beta carotene in the plant as a whole provide a number of positive activities, but all three are available in many foods, as such one would not use feverfew as the first option in, for example, antitumor activity ,one might suck an orange instead!

Its antiaggregant activity, in contrast, comes from chemicals like Parthenolide in the flower [as well as the Vitamin C, Magnesium and Selenium in the plant as a whole]. 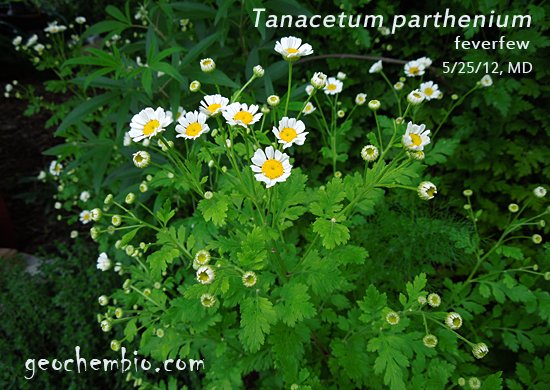 The mis-selling of Feverfew

There is one thing very evident from looking at the rash of ‘extracts’, pills and teas or tisanes and infusions on the market, Feverfew is being mis-sold.

All the side effects are to be expected of a product that causes blood thinning.  Supplements are starting to cause hypoxia and hypotension - no hallucinations yet, but there could be as hypotension can provide some major effects.

Here are the Adverse Drug reports submitted by doctors to the FDA.  Very few, but then who goes to a doctor with the symptoms of a herbal medicine?  This may be the tip of the iceberg.

A Problem with Allergies?

Compositae dermatitis is an allergic contact dermatitis caused by plant species of the Compositae family. The first report of a cutaneous reaction to the Chrysanthemum genus was made by Howe JS in 1887. In 1895 Maiden JH reported about skin lesions among men working with Tagetes minuta. Case reports of contact allergic-ragweed dermatitis appeared in the American literature as early as 1919. The North American feverfew--Parthenium Hysterophorus was brought to India from America in 1956 and it caused thousands of cases of so-called parthenium dermatitis. Ragweed and parthenium dermatitis became prototypes for the classic, so-called "airborne" Compositae dermatitis, that affects primarily exposed skin surfaces, and produces a universal erythroderma.  PMID: 12793186

There are many reports of serious allergic reactions to 'Feverfew' in skin products, but the question needs to be asked, which one of the many Feverfews has been used in the skin products?

A 45-year-old woman presented in October 2005 with a history of an eruption involving her scalp and face, including her eyelids and behind her ears. The eruption began at the end of August. It flared after she used a calming moisturizer [sic] containing feverfew.

According to Dr Duke’s analysis, the specific Feverfew which we are analysing here, Tanacetum parthenium, does have allergens – Reynosin in the Plant; Santmarin in the Flower and Leaf; and Parthenolide in the Flower are allergenic to those with a susceptibility to this family of plants - people who have acquired a susceptibility.  But this area seems currently to be fraught with problems of misidentification and mis-labelling and it really needs some sorting out.