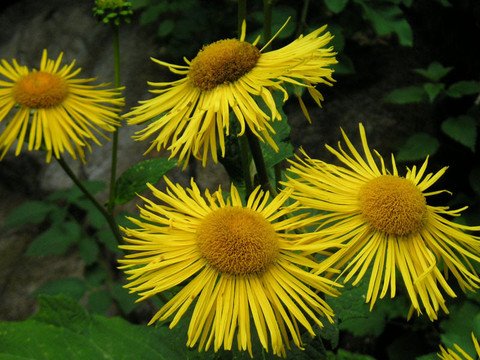 Elecampane , Inula helenium, also called horse-heal or marchalan (in Welsh), is a widespread species of plants in the sunflower family.

It is native to Europe and Asia from Spain to Xinjiang Province in western China, and naturalized in parts of North America.

The plant's specific name, helenium, derives from Helen of Troy; elecampane is said to have sprung up from where her tears fell. It was sacred to the ancient Celts, and once had the name "elfwort".

In France and Switzerland it is used in the manufacture of absinthe. 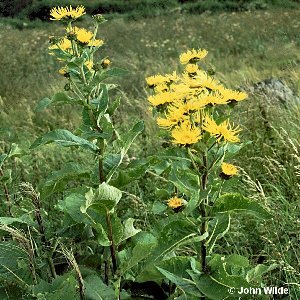 The leaves are large and toothed, the lower ones stalked, the rest embracing the stem; blades egg-shaped, elliptical, or lance-shaped, as big as 30 cm (12 in) long and 12 cm (4.7 in) wide. Leaves are green on the upper side with light, scattered hairs, but whitish on the underside because of a thick layer of wool.

The root is thick, branching and mucilaginous. 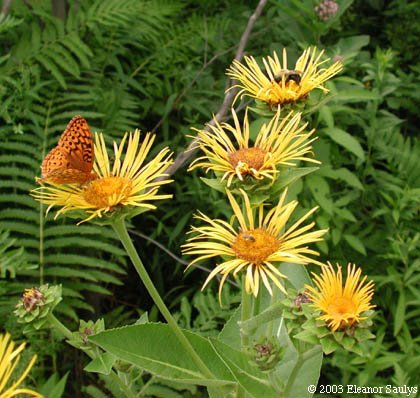 It is found widely distributed throughout England, though can scarcely be termed common, occurring only locally, in damp pastures and shady ground. It is probably a true native plant in southern England, but where found farther north may have originally only been an escape from cultivation, as it was cultivated for centuries as a medicinal plant, being a common remedy for sicknesses in the Middle Ages. When present in Scotland, it is considered to have been introduced. Culpepper says:
'It groweth in moist grounds and shadowy places oftener than in the dry and open borders of field and lanes and other waste places, almost in every county in this country’

but it was probably more common in his days, cultivation of it being still general.
It is found wild throughout continental Europe, from Gothland southwards, and extends eastwards in temperate Asia as far as Southern Siberia and North-West India. As a plant of cultivation, it has wandered to North America, where it has become thoroughly naturalized in the eastern United States, being found from Nova Scotia to Northern Carolina, and westward as far as Missouri, growing abundantly in pastures and along roadsides, preferring wet, rocky ground at or near the base of eastern and southern slopes.

The root has a long history of medicinal use.  It was employed by the ancients, and was mentioned by Pliny, in his Natural History. 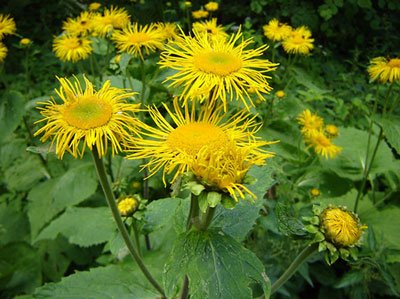 The root is thick, branching and mucilaginous, and has a warm, bitter taste and a camphoraceous odour with sweet floral (similar to violet) undertones. For medicinal purposes it should be procured from plants not more than two or three years old. Besides inulin, C12H20O10, a body isomeric with starch, the root contains helenin, C6H3O, a stearoptene, which may be prepared in white acicular crystals, insoluble in water, but freely soluble in alcohol. When freed from the accompanying inula-camphor by repeated crystallization from alcohol, helenin melts at 110° C. By the ancients the root was employed both as a medicine and as a condiment, and in England it was formerly in great repute as an aromatic tonic and stimulant of the secretory organs


It is mentioned in an 1817 New-England almanack as a cure for hydrophobia when the root is bruised and used with a strong decoction of milk. It is used in herbal medicine as an expectorant and for water retention.

The fresh roots of elecampane preserved with sugar, or made into a syrup or conserve, are very effectual to warm a cold and windy stomack, and the pricking and stitches therein or in the sides caused by the Spleene, and to helpe the cough, shortness of breath, and wheesing in the Lungs.


Dr Duke’s analysis of the plant and the uses are provided as observations.