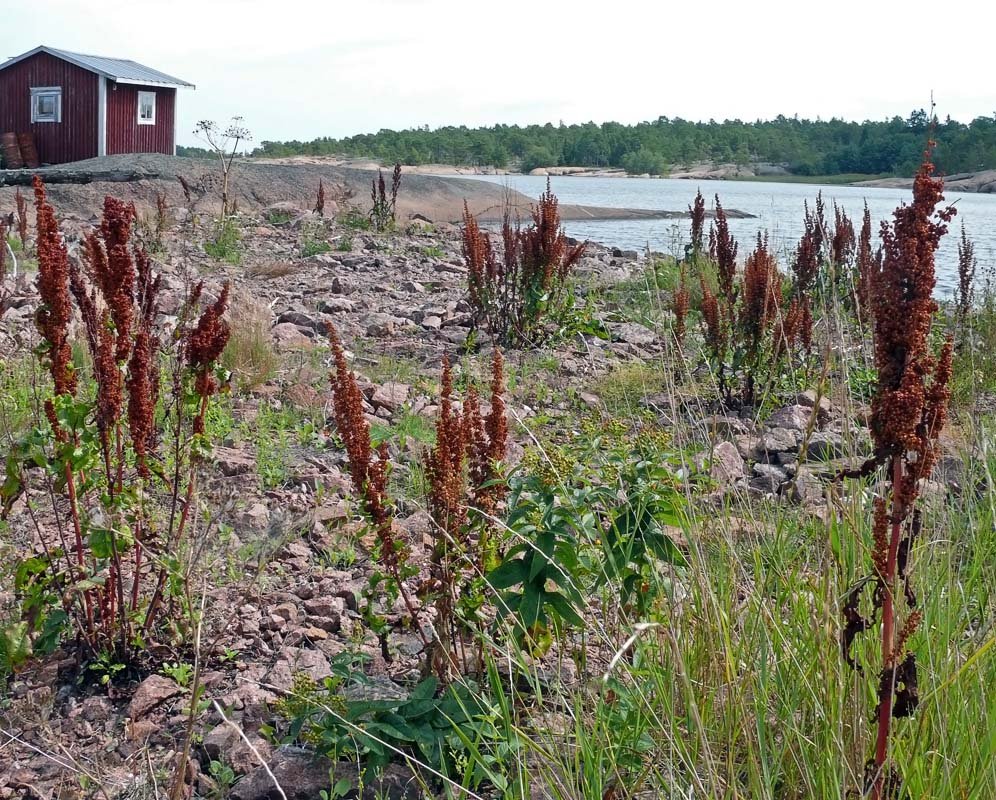 It is regarded as a weed, although my Aunt used to make lovely dried flower arrangements from it, and as children we were taught how to use dock leaves to help with nettle stings.  But it is a medicine in other ways too. 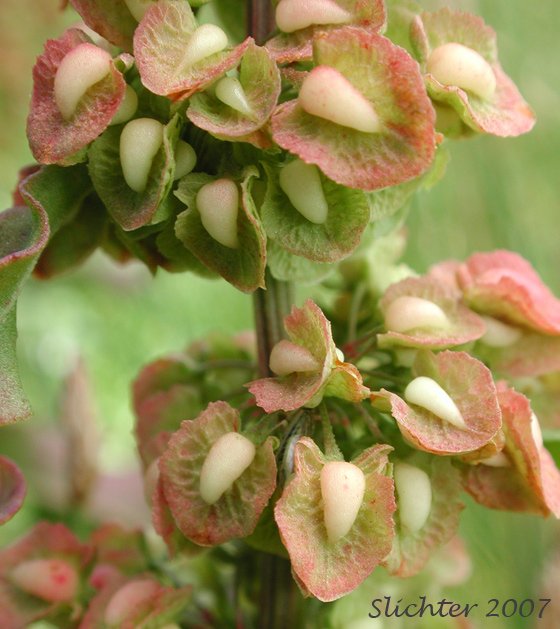 The plant produces an inflorescence or flower stalk that grows to about 1 m high. It has smooth leaves shooting off from a large basal rosette, with distinctive waved or curled edges. On the stalk flowers and seeds are produced in clusters on branched stems, with the largest cluster being found at the apex.

The seeds are shiny, brown and encased in the calyx of the flower that produced them. This casing enables the seeds to float on water and get caught in wool and animal fur, and this helps the seeds to spread to new locations. The root-structure is a large, yellow, forking taproot, the bane of every allotment holder in the UK, as even if you manage to get most of it out of your vegetable garden, it will still produce more from the remaining root. 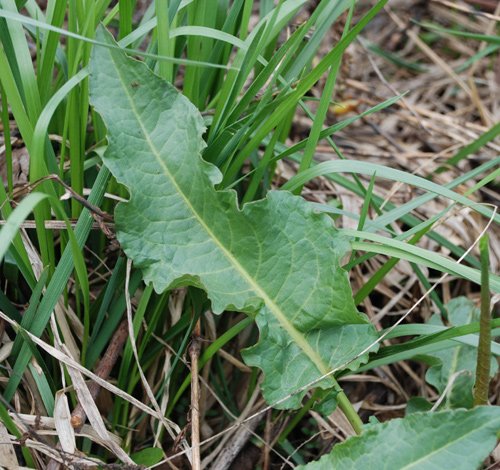 Being a 'weed',  Dock can be found all over the place, it does not need nurturing.

It is widely naturalised throughout the temperate world and has according to Wikipedia become a
"serious invasive species in many areas, including throughout North America, southern South America, New Zealand and parts of Australia. It is classified as an 'injurious weed' under the UK Weeds Act 1959".

It might be added for those who live outside the UK that there is an entire police action force dedicated to the  enforcement of this act, they have a special green uniform with flowers carefully embroidered all over and embroidered wellingtons, not to mention a TV programme about them entitled Dixon of Dock Green [I jest].

Dock has been used medicinally for many years.  This extract is an example:

the tap root is very long

Felter & Lloyd's Kings Dispensatory from 1898
The dock roots are decidedly alterative, tonic, and are eminently useful in scorbutic, cutaneous, scrofulous, scirrhous and syphilitic affections, leprosy, elephantiasis, etc.; for which purpose we prefer the Rumex crispus (Yellow Dock) which is principally employed for its alterative and tonic influences in all cases where these are desired.

In bad blood with skin disorders it is exceedingly efficient, acting decidedly upon the glandular system, removing chronic lymphatic enlargements, and especially influencing those conditions in which there is a tendency to indolent ulcerations and low inflammatory deposits.

which means they are strongly anti-bacterial and strongly anti-viral.  And this is born out by analysis, although the result shows that the common Dock is a very complex plant. Not common at all, in fact.

According to Dr. Duke's  Phytochemical and Ethnobotanical Databases, it has over 500 activities, too many to summarise here.  The activities are split between the root and the leaves, but the split is not predictable, as the root has as many antiviral activities as the leaves.  We have provided some observations that group some of those activities, to provide some examples of what it is able to do. 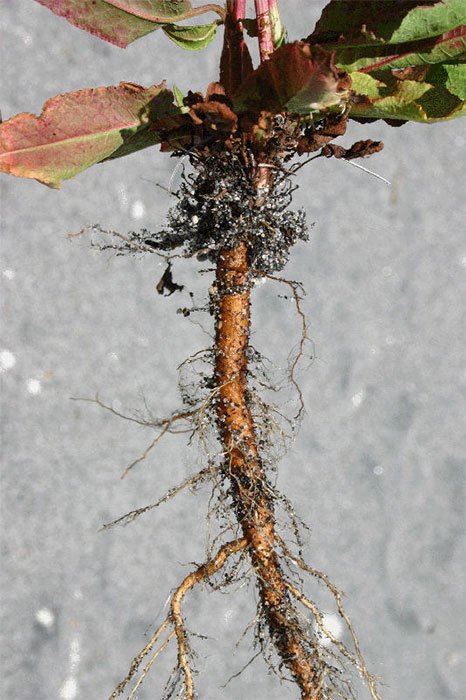 The root seems to exert part of its extremely strong anti-parasitic action via some quite violent mechanisms, one of which is purging.

Notice how the Purgative and  Trichomonicide activity are found in the same chemical.  There is also quite a lot of fibre to help in any diarrhoeal activity which achieves the same removal of unwanted pests.  Accompanying this, however, is considerable tranquilising and pain relief activity -  it is a COX-2-Inhibitor, Sedative;  and Tranquilizer.

Furthermore, the root has high mineral content which ought to help in restoring any lost minerals from the purging action.

There may be an odd symbiotic strategy here at work, as if the plant can encourage animals to dig up its roots after it has seeded, the forager may break up the root and add further to the stock, as each scattered rootlet if buried will produce a new plant.

There is more encouragement to a forager to do this as some of the antiplaque, antiperiodontitic; and antiseptic activity for the teeth is in the root.

On the other had there is also Oxalic acid, whose activity looks so fearsome, it is an immediate halt to using the root.  But the plant’s objective here is to stop a forager eating too much of the root, just enough to cure but not so much that the whole root is eaten.  There are some comments below under method about this problem - and it is a problem - Note that the root could be used externally as well. 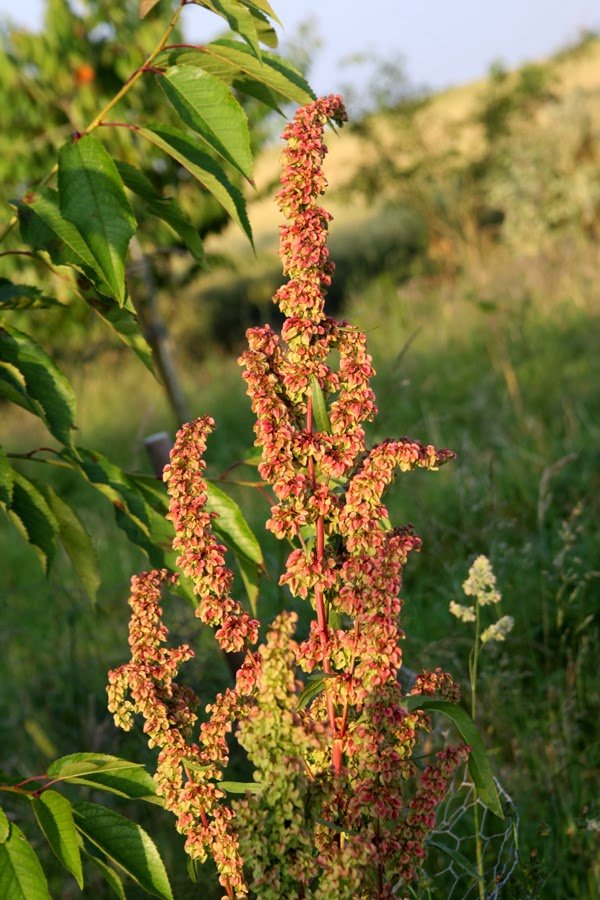 Just as the root had very clear reproductive system manipulation activity, so do the leaves .  The links between Dock and the manipulation of the forager’s reproductive system is thus achieved via leaves and root.  The leaves have Anticervicaldysplasic;  Anticlimacteric;  Antiendometriotic;  Antiinfertility; AntiPMS; Antimenopausal; AntiPMS;  Antiestrogenic and Estrogenic [implying it can manipulate on both directions];  Antiprostanoid; and Antiprostatitic activity.

There is also simple and general pain relief for the forager, whether the pain is caused by bad teeth or parasites, viruses or bacteria.  Dock has Analgesic; Antiinflammatory; Antiseptic; Immunostimulant;  COX-2-Inhibitor;  Tranquilizer; Antinociceptive;  and Sedative activity.

It also has sugars to help boost energy, and essential vitamins. 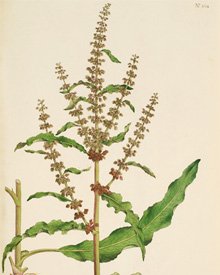 Dock is not a vegetable, you don't munch on it with your Sunday roast, it needs to be treated with a great deal of respect.

There are already commercial firms producing extracts of dockroot, but there are no tests  on what these extracts contain, nor very clear instructions on what they are good for.  If you don't have the viruses and bacteria that dock acts on this may be a very uncomfortable way to get nowhere.

You really need to know what you have, before this plant is used, as when it says purgative it means purgative.

It may be worth knowing that people have been poisoned after ingesting rhubarb leaves, which contain oxalic acid, and this was a particular problem during World War I when the leaves were mistakenly recommended as a food source in Britain.  But according to Wikipedia " the oxalic acid is removed by treatment with precipitated chalk".

A very useful plant, but one  which you should treat with respect.

A case of fatal poisoning due to ingestion of the plant Rumex crispus (curled dock) is described. The patient, a 53-year-old male, presented with gastrointestinal symptoms, severe hypocalcemia, metabolic acidosis and acute hepatic insufficiency. Despite therapeutic measures, the patient died 72 h after ingestion of the plant material. Noteworthy among the pathological findings were centrolobular hepatic necrosis and birefringent crystals in the liver and kidneys that were identified by histochemical techniques and scanning electron microscopy. These observations are compared with other reports in the medical literature, with an emphasis on the risk involved in the use of these plants for culinary or medicinal purposes. PMID: 2238449