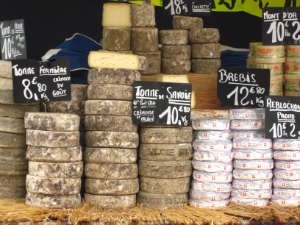 Cheese is covered under the more generic heading of Dairy products, as butter, cheese and milk all derive from the same source.  However, this section has been added to provide a little extra detail on cheese itself.  It also aims to dispel a few myths.

Cheese is a food derived from milk that is produced by coagulation of the milk protein casein. It comprises proteins and fat from milk, usually the milk of cows, buffalo, goats, or sheep. For a few cheeses, the milk is curdled by adding acids such as vinegar or lemon juice. Most cheeses are acidified to a lesser degree by bacteria, which turn milk sugars into lactic acid, then the addition of rennet completes the curdling. [Vegetarian alternatives to rennet are available; most are produced by fermentation of the fungus Mucor miehei, but others have been extracted from various species of the Cynara thistle family]. During production, the solids are then separated and pressed into final form.

Wikipedia says that “Hundreds of types of cheese from various countries are produced”, but go to any French market and you will see that there are hundreds in each region in France alone and we might better talk about thousands not hundreds.

The texture and flavour depend on the origin of the milk, the animal's diet, whether the milk has been pasteurized, the butterfat content, the bacteria or mould in the cheese, the processing, and ageing. Any number of ingredients may also be added to cheese - from spices such as cumin and caraway, black pepper and nutmeg; to herbs; plants such as nettles, garlic and chives; ash; fruit such as apricots and cranberries; and even honey. And the cheese may also be smoked.

The yellow to red color of many cheeses, such as Red Leicester, is produced by adding annatto. 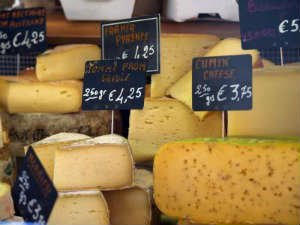 There is very clear evidence from the observations that cheese has considerable healing potential.  Many cheeses act like probiotics.  Parmesan, Gran Padano, Manchega and other hard cheeses, for example, contain many of the 'friendly bacteria' found in yoghurt and used in diseases such as IBS.

What I also think needs to be highlighted is just what an important source cheese is for both vitamins and minerals.  Two vitamins in particular - Vitamin D and Vitamin A - are not widely available from food stuffs and cheese represents an extremely important source.  If it is the Winter and you are not exposed to the sun, it may be one of the very few sources of Vitamin D available to you.

If you turn to the section on Cancer, you will see that there is a strong correlation between cancer and viruses, bacteria, fungi, toxins and parasites. Without Vitamin D, there is zinc deficiency, with zinc deficiency you get a compromised immune function and a compromised immune function cannot fight all these unpleasant invaders, so even if you don't get cancer, you may get numerous other diseases of the organs, because much disease is caused by these pathogens.

The high lipid content of cheese is not, as many nutritionists appear to believe, negative.  The lipids improve the absorption of Vitamin A in the intestines, without the lipids, absorption is much lower.

And the existence of cholesterol is also not necessarily a negative feature.  Blood circulatory diseases are usually caused by toxins, bacteria, heavy metals, fungi, viruses and pharmaceuticals and drugs.  All these serve to inflame the walls of the arteries and veins and cause disease.  Cholesterol is a symptom of this not a cause, as it is used to repair damaged tissue.  Thus heavy exposure to toxins and poisons, may necessitate both a preventative chelating and healing strategy, cheese may actually help the healing not hinder it.

Cheese consumption is the leading contributor of SF (saturated fat) in the U.S. diet, and therefore would be predicted to increase LDL-C (LDL cholesterol) and consequently increase the risk of CVD (cardiovascular disease).....But based on results from numerous prospective observational studies and meta-analyses, most, but not all, have shown no association and in some cases an inverse relationship between the intake of milk fat containing dairy products and the risk of CVD, CHD (coronary heart disease), and stroke. A limited number of prospective cohort studies found no significant association between the intake of total full-fat dairy products and the risk of CHD or stroke....Most clinical studies showed that full-fat natural cheese, a highly fermented product, significantly lowers LDL-C compared with butter intake of equal total fat and saturated fat content.

To understand this we need to look at the chart below.  All the vitamins and minerals that cheese contains help to bolster the immune system.  In the current symptom based medical approach used by doctors, the only defence we have against the causes of heart disease - the toxins, the bacteria, the viruses and so on - is our immune system, as such any food that bolsters our immune system is going to have a positive not a negative effect.

Doctors prescribe drugs to mask the symptoms, but cheese and other food stuffs with high mineral and vitamin content help to combat the cause, supporting our immune system against the external agents we have inadvertently introduced.

Cheese is also an important source of calcium, a glance at the section on calcium imbalance and the long list of diseases caused by calcium deficiency should show what a key role cheese can play here.

It is a good source for protein and phosphorus.  Phosphorus deficiency can result in muscle and neurological dysfunction, and disruption of muscle and blood cells.  Bone and tooth deterioration and decay can be caused by phosphorus deficiency - it is a contributory factor in both rickets and osteoporosis.  So you can see that cheese could be a major preventer of tooth decay and osteoporosis in the elderly.

Cheese also contains zinc in reasonable amounts.  Because zinc is so closely tied with the immune system, we can become more susceptible to just about every disease if zinc levels are low.  As zinc is key to growth, in children it causes growth retardation and delayed sexual maturation.  Zinc is needed for Vitamin A absorption and deficiency of Vitamin A can cause blindness.

Cheese is good for you! 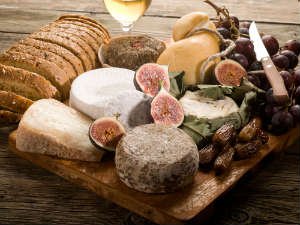 It may be helpful to see the specific nutrient content of cheese.  The following table describes cheddar cheese.  It comes from the USDA Nutrients database.  Clearly different cheeses are going to have slightly different compositions, but it should give you an idea of what cheese contains.

Do not eat cheese if you are on antidepressants based on MOAIs, you may get hypertension and suffer heart problems or worse

I'm not going to tell you about the million and one ways you can use cheese in cooking. I will however tell you about my brother with eczema who loved nothing better than cheese on toast topped with pickled onions.  He also liked cream horns [puff pastry] stuffed with cream, jam and pickled onions - but that is another story. 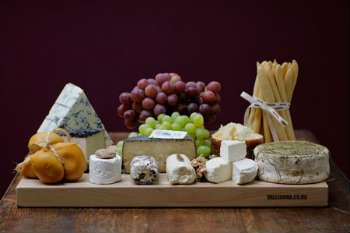