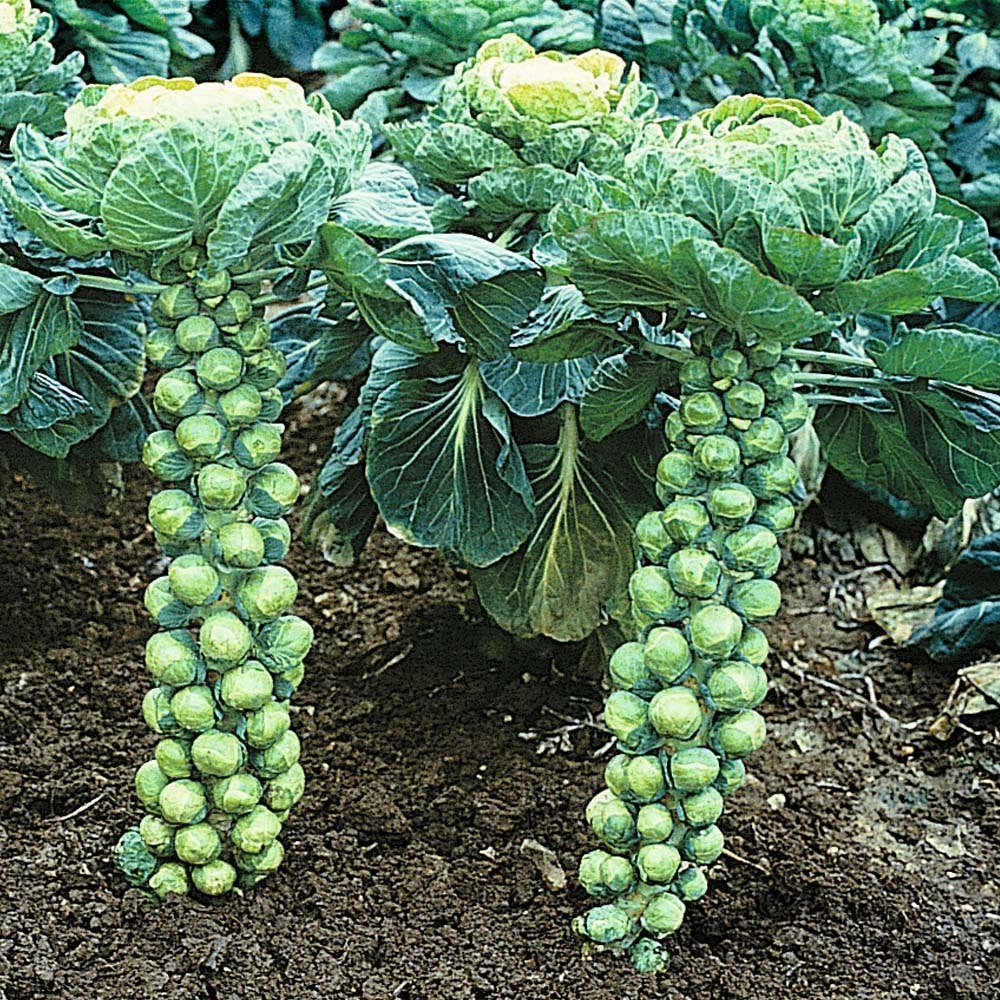 The Brussels sprout is a member of the Gemmifera Group of cabbages (Brassica oleracea).  In other words it is a Brassica.

It is grown for its edible buds, which have a sweet nutty taste.  Picked fresh and quickly boiled, they are delicious on their own, especially with white meat such as turkey and chicken, however, they can also be used in Winter salads with bacon and chestnuts [and a brown sugar or honey, bacon fat and cider vinegar dressing].

The leafy green vegetables are typically 2.5–4 cm (0.98–1.6 in) in diameter and look like miniature cabbages. They are best when they are still closed and not 'blown', however, whatever their state they are edible and tasty.

In Continental Europe, the largest commercial producers are the Netherlands, at 82,000 metric tons, and Germany, at 10,000 tons. 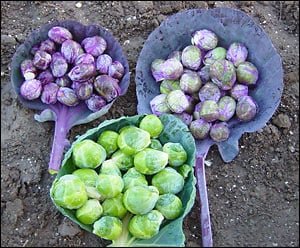 Brussels sprouts are a cultivar group of the same species as cabbage, in the same family as collard greens, broccoli, kale, and kohlrabi; they are cruciferous (they belong to the Brassicaceae family; old name Cruciferae).

Many cultivars are available, some being purple in colour, such as 'Ruby Crunch' or 'Red Bull'.  The edible sprouts grow like buds in helical patterns along the side of long, thick stalks of about 60 to 120 cm (24 to 47 in) in height, maturing over several weeks from the lower to the upper part of the stalk.  Dwarf varieties are also available, which are exceptionally useful in very windy areas, as in high winds the plant – which is top heavy – can get knocked over unless you stake them. 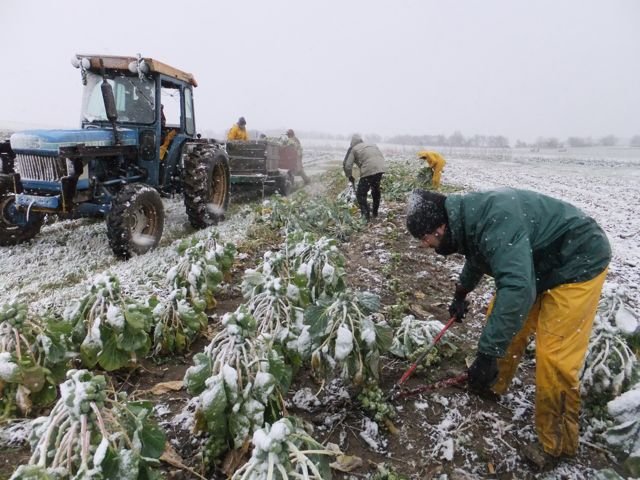 Harvest season in temperate zones of the northern latitudes is September to March, making Brussels sprout a traditional winter stock vegetable. In the home garden, harvest can be delayed as quality does not suffer from frosts, in fact, sprouts are considered to be sweetest after a frost.

Although the cabbage white butterfly is a pest of Brussel sprouts, one of the worst pests, if you are unlucky enough to get it into your vegetable patch, is the whitefly, a pest of various Brassica crops.  They are actually beautiful little insects, but the damage they and their larvae do is considerable. 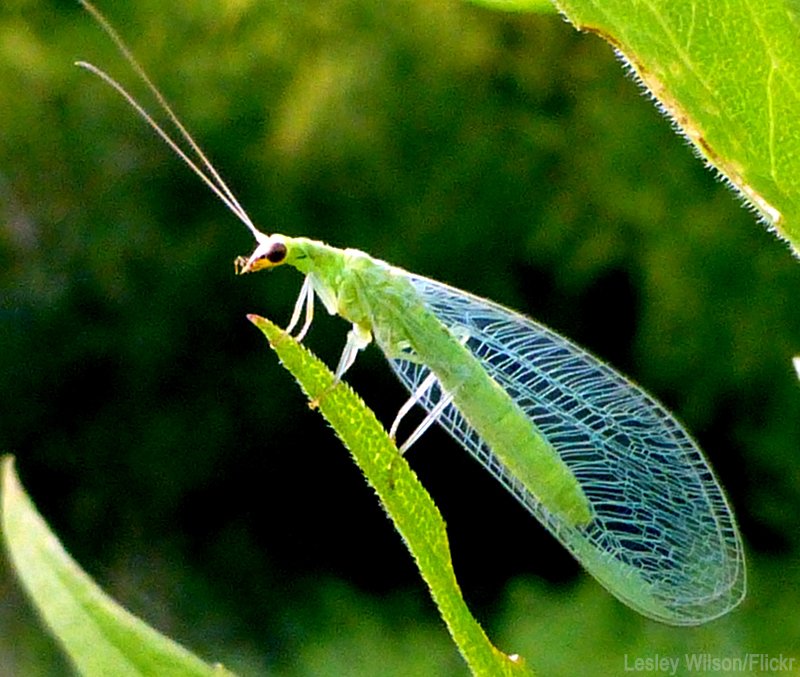 Several predators and parasitoids feed on whitefly and whitefly larva but the two that used to be most common were the green lacewing and the ladybird.

At one time both were common.  In the days before the use of insecticides and pesticides by farmers, gardens used to be full of ladybirds and lacewings.  We used to have many come into the house to seek shelter in the winter.  No more.

Green lacewing larvae have voracious appetites, so will attack whiteflies, as well as other pests, including aphids, mealybugs, spider mites, leafhopper larvae, moth eggs, scales, and thrips. They can also attack other insects, including caterpillars. As such they are truly a gardener’s best friend, if they hadn’t been wiped out by the ‘cleverness’ of the factory farmer. 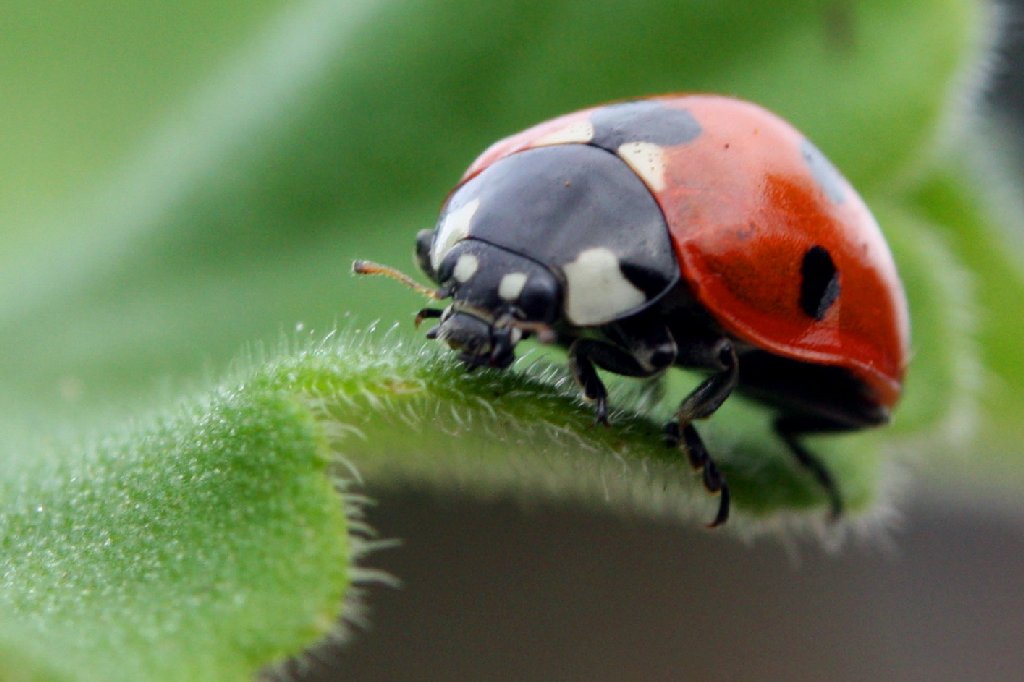 ladybird, ladybird fly away home ; the farmer is spraying soon all will be gone

Theoretically, they are available as eggs from commercial insectaries, and will stay in a larval stage after they hatch for one to three weeks. But what is the point of continually buying baby lacewings, to see the adult ones killed by the farming community?

You can encourage those lacewings that hatch to stay, by providing a host of pollen and nectar producing flowers.  The adult insects feed only on pollen, honey, and nectar to reproduce. You need to know which flowers are best as some experiments have shown that Maize (Zea mays) pollen is so nutritious that the lacewings may lay their eggs on the corn instead of the brassicas.  The larvae of the green lacewing, for example,  Chrysoperla carnea (Neuroptera: Chrysopidae) is capable of eating whitefly larvae and pollen – or as it says in the research papers “can be used by predatory arthropods to supplement or replace a carnivorous diet”. 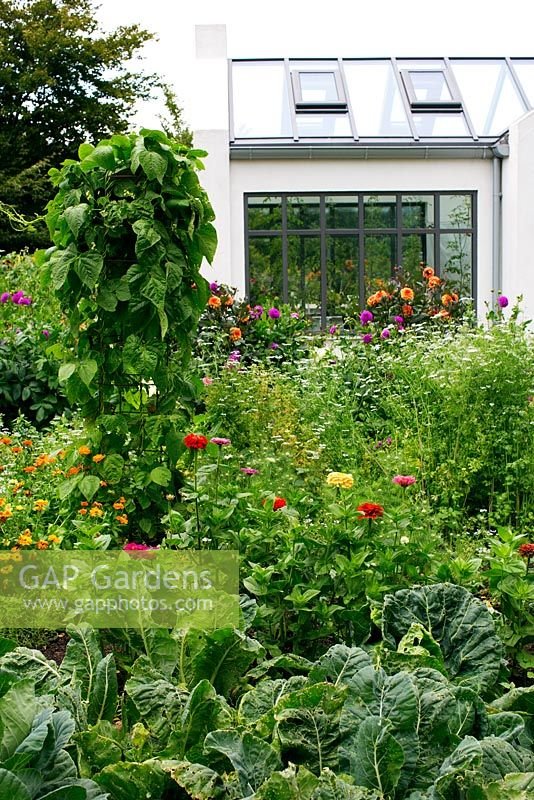 Ideas for companion planting, a mixed flower and vegetable
garden

Sage, Rosemary, Hyssop, Thyme, Mint, and interestingly Nasturtium have traditionally all been used with some success as food for adult lacewings.

Lacewing eggs are eaten before they hatch by their natural predators, ants.  This is why the whitefly produce the honeydew – it attracts the ants, which then eat the whitefly enemy the lacewing larvae, so an obvious step is to lure the ants elsewhere, with equally delectable syrups – well away from your brassicas.

Ladybirds eat mostly insect eggs, but will also feed on beetle larvae, aphids, scale insects, and young caterpillars. A ladybird is a flighty curious little insect and whatever inducement you offer will not stay in one place.  They live for about a year and will continuously lay eggs and reproduce, but once they leave the safety of your garden – well the farmers are out to get them. 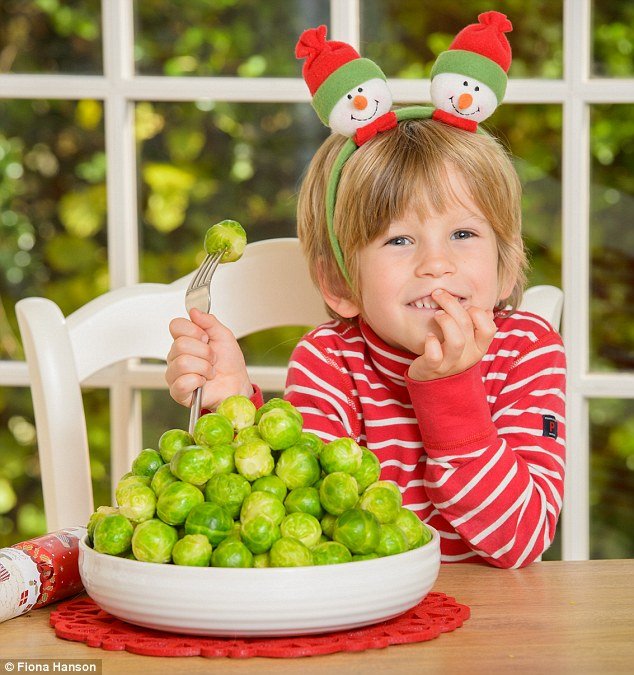 The full chemical analysis from Dr Duke’s Phytochemical database is provided as an observation.  In the table below we have summarised and reordered this activity, showing the minerals, vitamins and so on, concentrating on the leafy parts. Brussel sprouts are a good source of fibre [Leaf 15,100 - 107,814 ppm] and a good source of PHYTOSTEROLS [Leaf 240 - 1,710 ppm].

According to Wikipedia – whose data is based on the USDA Nutrients database - Brussel sprouts are a good source of Vitamin K [phylloquinone].  Dr Duke’s analysis does not have this information.

Raw Brussels sprouts contain excellent levels of vitamin C , with more moderate amounts of B vitamins.  It is rich in minerals.

Brussels sprouts, as with broccoli and other brassicas, contain sulforaphane, a phytochemical under basic research for its potential anticancer properties. This is not shown in the chart below.  Although boiling reduces the level of sulforaphane, steaming and stir frying do not result in significant loss.

With the properties of efficacy, safety, tolerability, practicability and low cost, foods containing bioactive phytochemicals are gaining significant attention as elements of chemoprevention strategies against cancer. Sulforaphane [1-isothiocyanato-4-(methylsulfinyl)butane], a naturally occurring isothiocyanate produced by cruciferous vegetables .., is found to be a highly promising chemoprevention agent against not only a variety of cancers such as breast, prostate, colon, skin, lung, stomach or bladder, but also cardiovascular disease, neurodegenerative diseases, and diabetes. PMID:  26970133 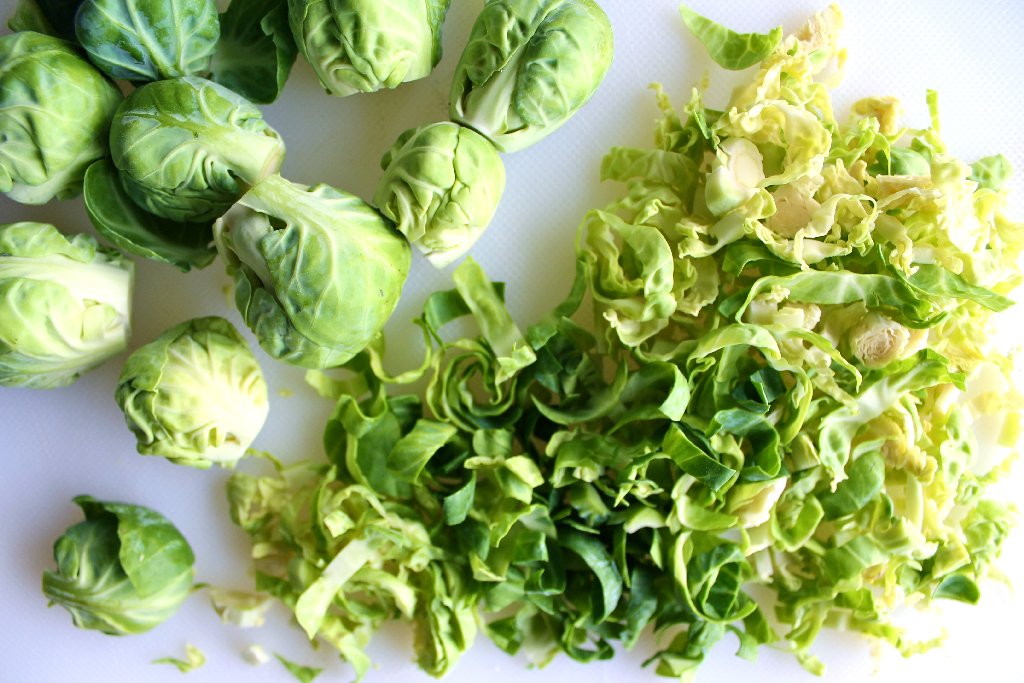 For each sprout, take off any loose surface leaves.  A cut in the bottom of the stalk is said to help with even cooking, meaning you don’t have to cook them as long.  They can be boiled, steamed or stir fried.

Despite all the jokes about starting the cooking of your Christmas Brussel sprouts in August, they actually take only about 7-10 minutes when boiled, depending on size, smaller sprouts take even less cooking.

We have decided not to provide numerous recipes for brussel sprouts.  They are a nutritious, nutty, delicious vegetable that in reality needs no adornment.  Again, despite the jokes, most children we know love them as they are - with maybe a bit of butter on the top. 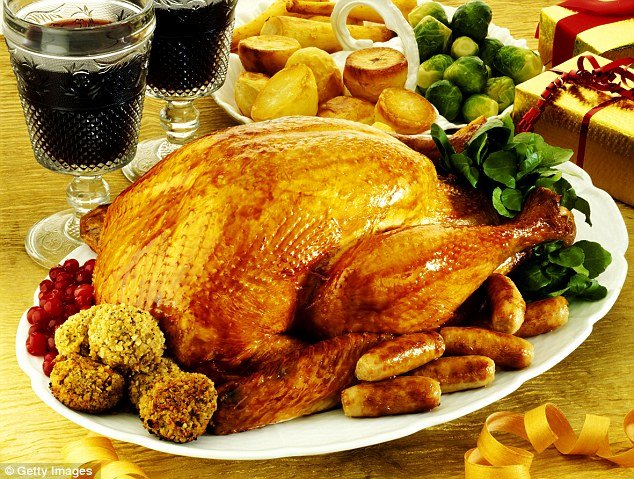