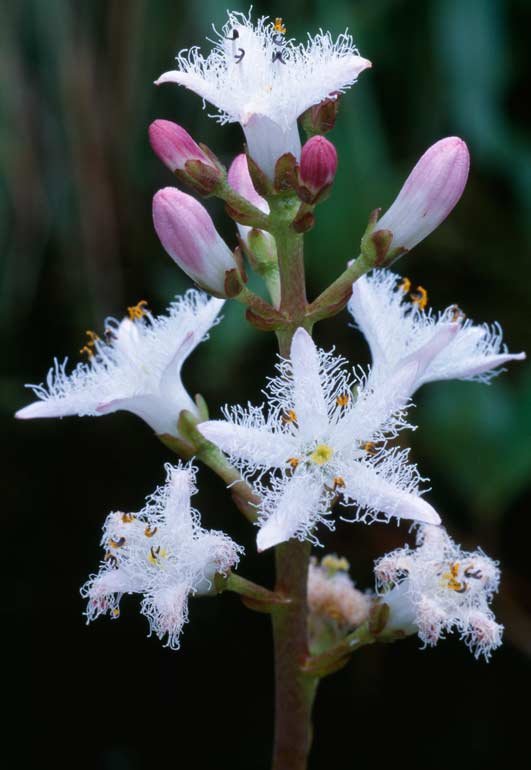 Menyanthes is a monotypic genus of flowering plant in the family Menyanthaceae containing the single species Menyanthes trifoliata.

Common names include the Bog Myrtle, Bogbean, Buckbean, Marsh Clover, Marsh Trefoil, Water Trefoil, all of which give a clue to the sort of habitat it likes best and that is wetlands.

Despite being called the Bog myrtle it is unrelated to the Myrtle.

The name Menyanthes comes from the Greek words menyein, meaning "disclosing", and anthos, meaning "flower", in reference to the sequential opening of flowers on the inflorescence. The North American form is often referred to as M. trifoliata var. minor Michx.

Menyanthes trifoliata occurs in fens and bogs in Asia, Europe, and North America. In eastern North America, it is considered to be a ‘diagnostic fen species’. It sometimes creates big quagmires with its thick roots.

A beautiful plant, Menyanthes trifoliata has a horizontal rhizome with alternate, trifoliate leaves. The ‘inflorescence is an erect raceme of white flowers’, which hardly does it justice as you can see from the pictures, a lovely fluffy mass of softly pink and white flowers held above the water.

The leaves of Bog Myrtle have Vitamin C, Beta carotene, and Choline, rather indicating that the plant is happy to be browsed by animals because its chief mechanism of spreading is via its rhizome.

But Bog myrtle’s chief claim to fame is its potential as a bioremedial plant.  It has Caffeic acid, Chlorogenic acid, Ferulic acid, and Tannin, a very potent combination capable of cleaning up a number of extremely unpleasant toxins. 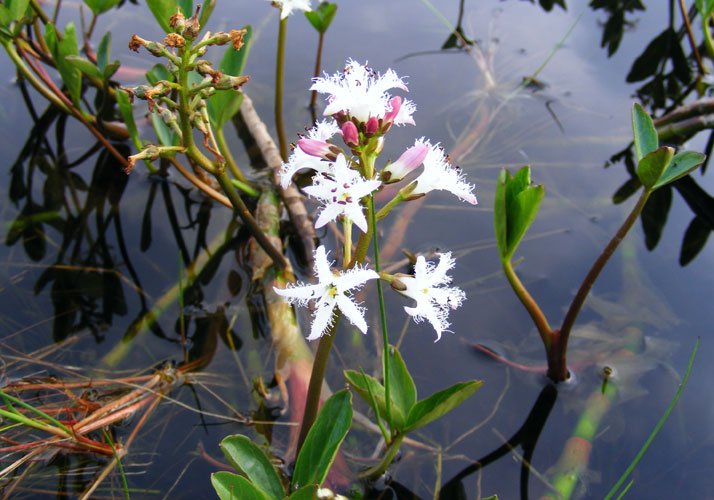 It does have other interesting activities, but many of these are via chemicals that have more accessible and occasionally edible sources.

Betulin, for example, is to be found in the root and Betulin has antiflu and antiHIV activity.  Rosemary, Sage, Chestnuts and Mangosteen all contain Betulin and thus provide an alternative edible source.

If we take another chemical in Bog Myrtle – Betulinic acid, found in the rhizome and the root, it too has antiHIV activity, and more general antiviral activity.  But Betulinic acid is also found in the Manuka tree – now famed for its Manuka honey and in Ginseng.

The Betulinic acid in Bog myrtle, however, has one extra activity up its sleeve that may be useful in  its own right.  The rhizome is Antimalarial IC50=19-26 ug/ml and Antiplasmodial meaning that it may be able to act as a deterrent to mosquitoes in wetlands.  The chemical Lupeol in the root is also Antimalarial IC50=46.8 ug/ml.  Lupeol is Cytotoxic, as such one has to think of the plant as a whole as a deterrent.  Rutin in the leaf is also anti-malarial.

Thus it is the growing plant that is of interest,  through its repellent and chelating activity.