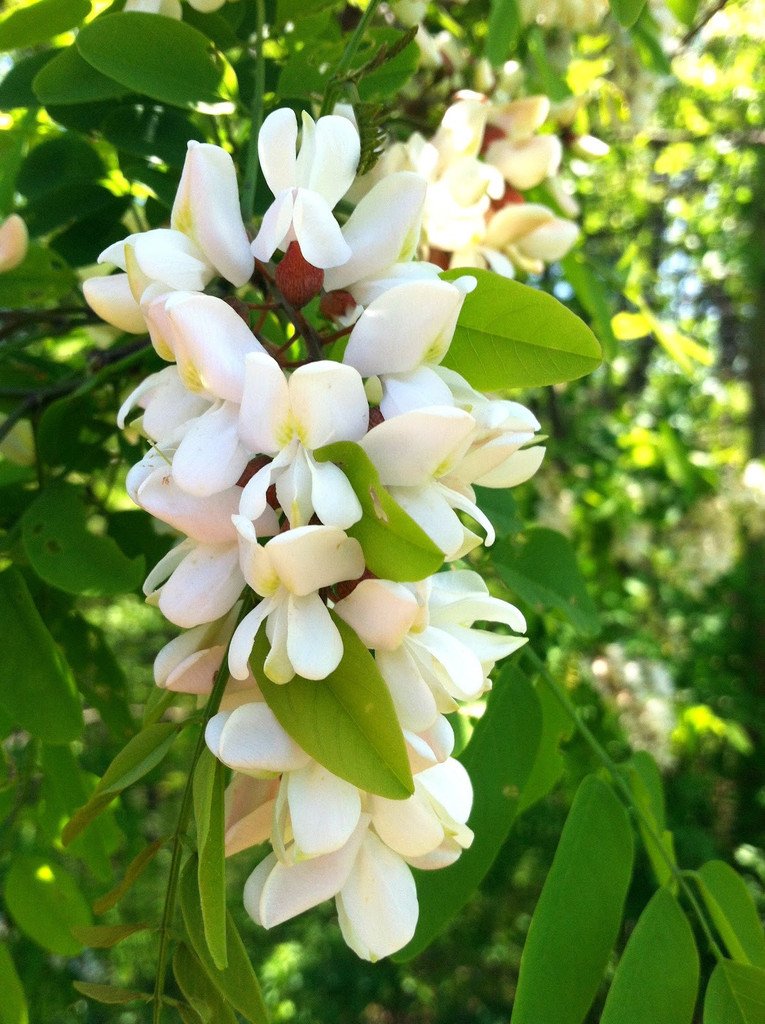 Robinia pseudoacacia, also known in its native territory as black locust, is a tree of the genus Robinia in the subfamily Faboideae of the pea family Fabaceae.  Another common name is false acacia, a literal translation of the specific name.

The wood of this tree is extremely hard, resistant to rot, and durable, making it prized for furniture, flooring, paneling, fence posts, and small watercraft.

Wet, newly cut planks have an offensive odour which disappears with seasoning.

As a young man, Abraham Lincoln spent much of his time splitting rails and fence posts from black locust logs. Black locust is still in use in rustic handrail systems and is used for small scale construction of wooden buildings and structures, where the beauty of the wood can be seen. 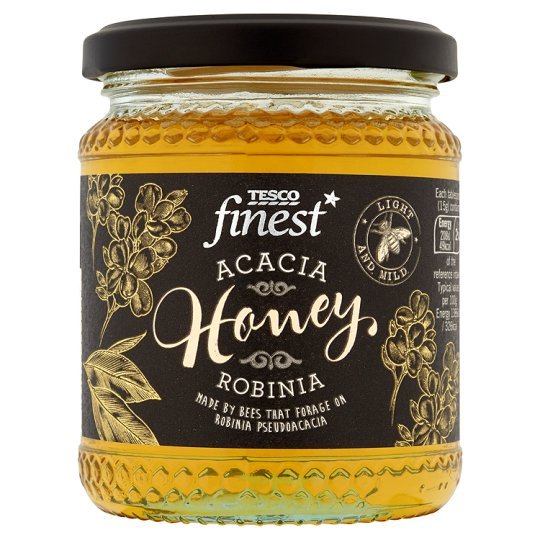 Flowering starts after 140 growing degree days, however, its blooming period is short (about 10 days) and it does not consistently produce a honey crop year after year.

Weather conditions can have quite an effect on the amount of nectar collected, as well; in Ohio for example, good locust honey flow happens in only one in five years.

Medicinally its use is limited, but honey of course is a major medicine.

The black locust is native to the southeastern United States from Pennsylvania to northern Georgia and westward as far as Arkansas and Oklahoma.   It has been widely planted and naturalized elsewhere in temperate North America, Europe, Southern Africa and Asia and is considered an invasive species in some areas.  It was introduced into Britain in 1636. 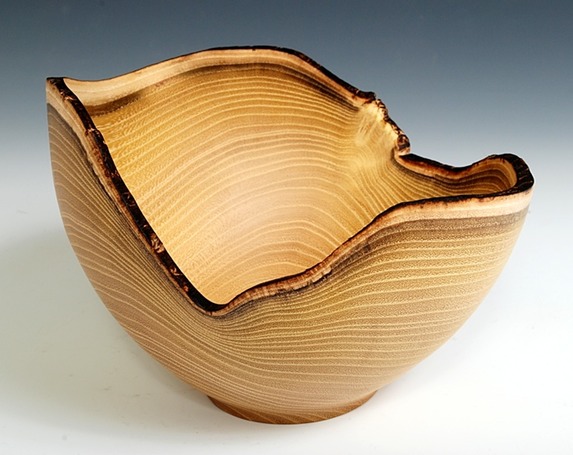 In South Africa, it is regarded as a weed because of its habit of freely suckering from roots near the surface and aggravated by cutting of the main stem.

The name 'locust' is said to have been given to Robinia by Jesuit missionaries, who fancied that this was the tree that supported St. John in the wilderness, but it is native only to North America. The locust tree of Spain (Ceratonia siliqua or carob tree), which is also native to Syria and the entire Mediterranean basin, is supposed to be the true locust of the New Testament.

Robinia is now a North American genus, but traces of it are found in the Eocene and Miocene rocks of Europe. 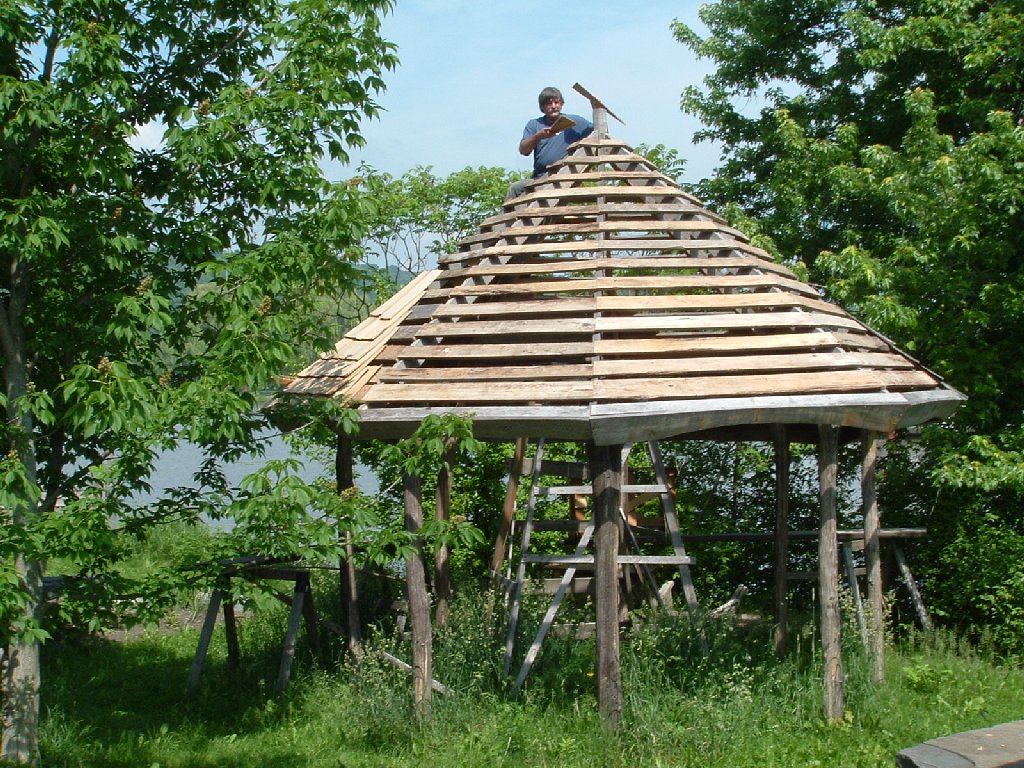 The Black Locust has a trunk up to 0.3 m diameter (exceptionally 1.6 m diameter - three or four feet  - in very old trees). The tree reaches a height of about 70 feet, with brittle branches that form an oblong narrow head. It spreads by underground shoots. 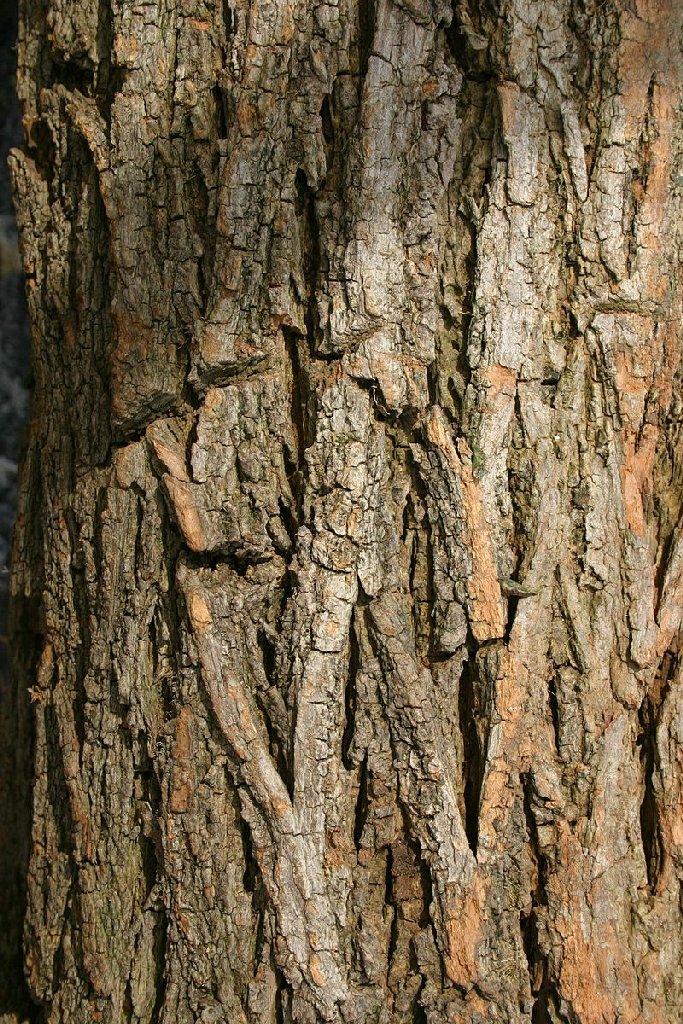 The tree has thick, deeply furrowed blackish to dark grey brown bark, tinged with red, deeply furrowed, with a surface inclined to scale. Branchlets at first are coated with white silvery down. This soon disappears and they become pale green, afterward reddish brown. Prickles develop from stipules, are short, somewhat triangular, dilated at base, sharp, dark purple, adhering only to the bark, but persistent. 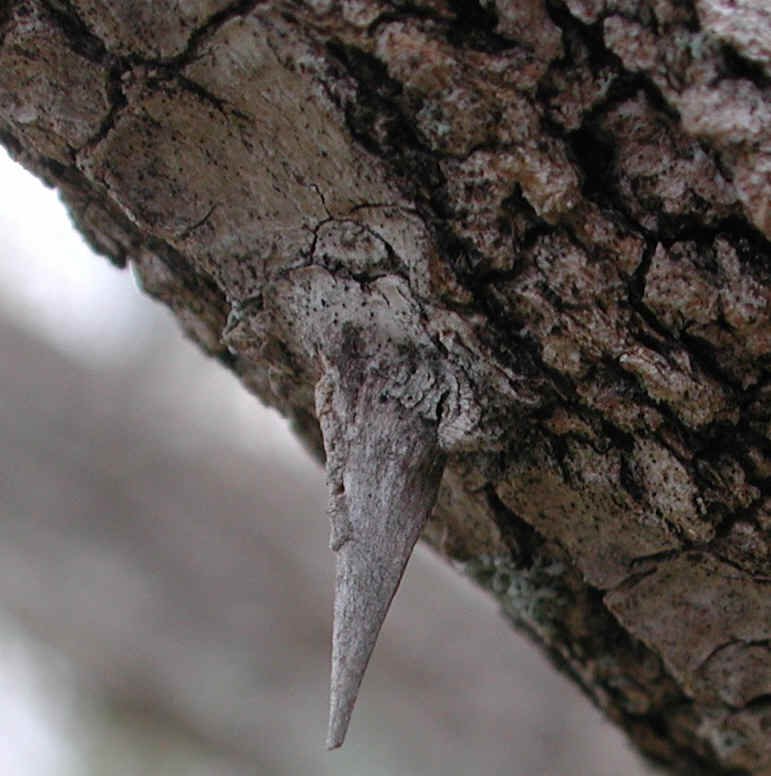 The leaves are 10–25 cm long, pinnate with 9–19 oval leaflets, 2–5 cm long and 1.5–3 cm broad. Each leaf usually has a pair of short spines at the base, 1–2 mm long or absent on adult crown shoots, up to 2 cm long on vigorous young plants.  The leaves come out of the bud conduplicate, yellow green, covered with silvery down which soon disappears; when full grown are dull dark green above, paler beneath, feather-veined, with the midvein prominent. In autumn they turn a clear pale yellow. It comes into leaf relatively late in spring.

The leaflets fold together in wet weather and at night; some change of position at night is a habit of the entire leguminous family. 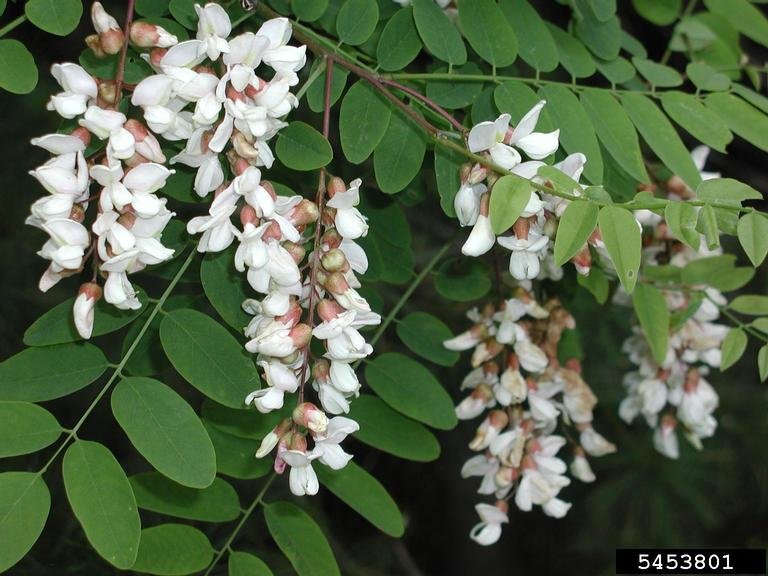 The intensely fragrant (reminiscent of orange blossoms) flowers are white to lavender or purple, borne in pendulous racemes 8–20 cm long. The Winter buds are minute, naked, three or four together, and protected in a depression by a scale-like covering lined on the inner surface with a thick coat of tomentum, opening in early spring; when forming they are covered by the swollen base of the petiole.  The tree flowers in May or June, after the leaves. The Pedicels are slender, half an inch long, dark red or reddish green.

The fruit is a legume containing four to 10 seeds.  It is two-valved, smooth, three to four inches long and half an inch broad. It ripens late in autumn and hangs on the branches until early spring. Seeds are dark orange brown with irregular markings. Cotyledons oval, fleshy.

Although similar in general appearance to the honey locust, it lacks that tree’s characteristic long branched thorns on the trunk, instead having the pairs of short spines at the base of each leaf; the leaflets are also much broader. 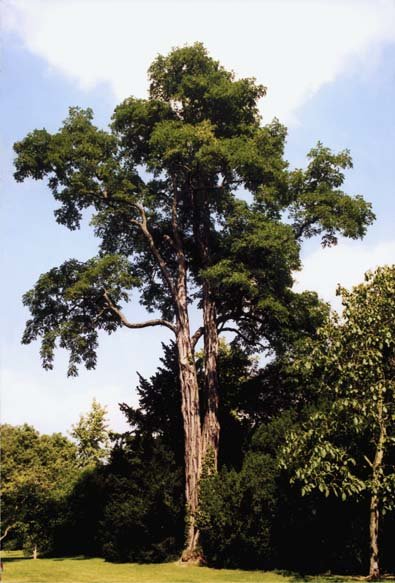 A specimen in Kew gardens

In Europe, it is often planted along streets and in parks, especially in large cities, because it tolerates pollution well. The species is unsuitable for small gardens due to its large size and rapid growth, but the cultivar ‘Frisia’, a selection with bright yellow-green leaves, is occasionally planted as an ornamental tree.

In 1900, the value of Robinia pseudoacacia was reported to be practically destroyed in nearly all parts of the United States beyond the mountain forests which are its home by locust borers which riddle the trunk and branches. Were it not for these insects, it would be one of the most valuable timber trees that could be planted in the northern and middle states. Young trees grow quickly and vigorously for a number of years, but soon become stunted and diseased, and rarely live long enough to attain any commercial value.

In the traditional medicine of India, different parts of R. pseudoacacia are used as a laxative, antispasmodic, and diuretic.  But great care is needed as the bark and leaves are poisonous.  Mrs Grieve recommends the plant principally as an [external] astringent.  We recommend the honey! 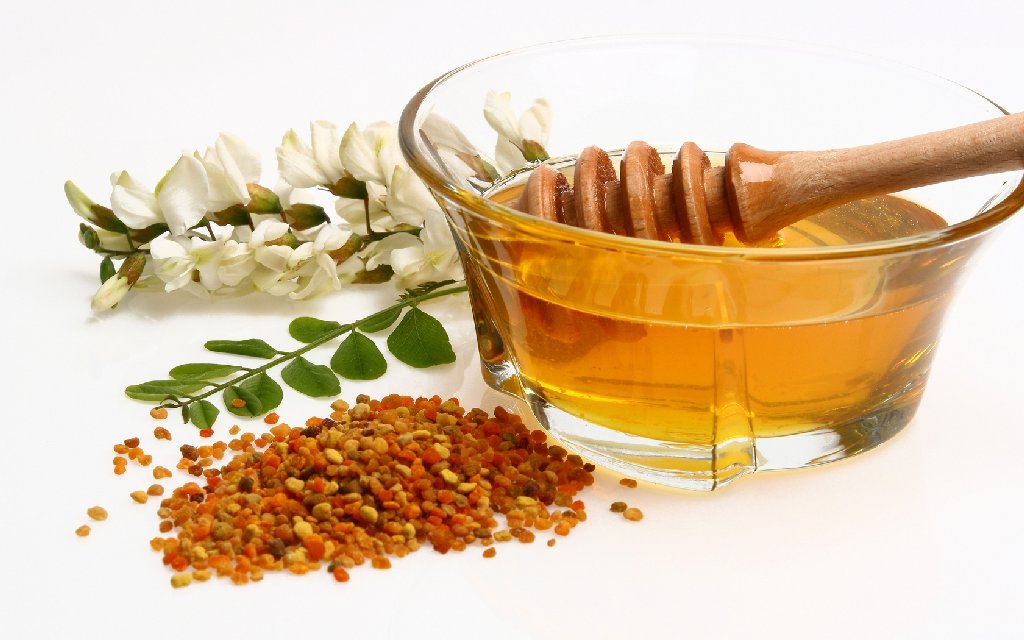