Sydenham's chorea or chorea minor was historically referred to as Saint Vitus Dance.  It is named after British physician Thomas Sydenham (1624–1689). The alternate name, "Saint Vitus Dance", is in reference to Saint Vitus, a Christian saint who was persecuted by Roman emperors and died as a martyr in AD 303. Saint Vitus is considered to be the patron saint of dancers, and this name for the disease is in recognition of the symptoms’s similarity with the manic dancing that historically took place in front of his statue during the feast of Saint Vitus in Germanic and Latvian cultures. 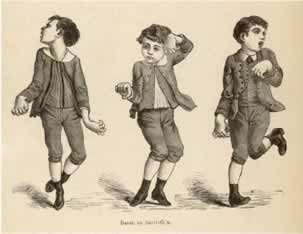 Other neurologic symptoms include “behavior change, dysarthria, gait disturbance, loss of fine and gross motor control with resultant deterioration of handwriting, headache, slowed cognition, facial grimacing, fidgetiness and hypotonia.   Also, there may be tongue fasciculations ("bag of worms"), and a "milk sign", which is a relapsing grip demonstrated by alternate increases and decreases in tension, as if hand milking”.

Movements cease during sleep, [which indicates a link with the sleep wake cycle and the organs that control this] and the disease usually resolves after several months.  Fifty percent of patients with acute Sydenham's Chorea spontaneously recover after 2 to 6 months, occasionally motor symptoms persist for up to and over 2 years.

In some people, however, there are additional symptoms and one of these is that the person gets hallucinations and visions.  At one time the children who contracted St Vitus’s dance were especially venerated, in the way epileptics were, because of the visions and hallucinations that they obtained.  In a number of cultures, the children were selected and trained as future shamans and healers.  I have provided one observation on this very aspect.

Streptococcus is a genus of spherical Gram-positive bacteria. Cellular division occurs along a single axis in these bacteria, and thus they grow in chains or pairs, hence the name — from Greek 'streptos', meaning easily bent or twisted, like a chain (twisted chain).

Group A Streptococcus (GAS), is responsible for quite a number of very nasty infections including "strep throat", rheumatic fever, and scarlet fever. St Vitus’s dance is reported to occur in 20-30% of patients with acute rheumatic fever (ARF). The disease is usually latent, occurring up to 6 months after the acute infection, but may occasionally be the presenting symptom of rheumatic fever.

Rather than being directly invasive and inflammatory, this bacteria seems to cause local infection, but then its other actions are via toxins: whether affecting kidneys in post strep glomerulonephritis, heart valves in rheumatic fever, the scarlet skin of scarlet fever or dissolving tissue in necrotizing fasciitis.

In Sydenham’s chorea it attacks the brain.  And the parts of the brain known to be affected are near the brain stem – “Choreiform movements in chorea minor are attributed to dysfunction of the basal ganglia based on post-streptococcal autoimmune-mediated mechanisms”.

The basal ganglia (or basal nuclei) is situated at the base of the forebrain.  For the majority of symptoms of Saint Vitus’s dance, it is clear that it is this part of the brain that has been temporarily damaged, as the basal ganglia is associated with functions like voluntary motor control, and  eye movements.  If we look at the diagram below we see the major components of the basal ganglia – the caudate and putamen, globus pallidus,  substantia nigra and the subthalamic nucleus.  All these are very close to the reticular formation – see the Brain and its functions. 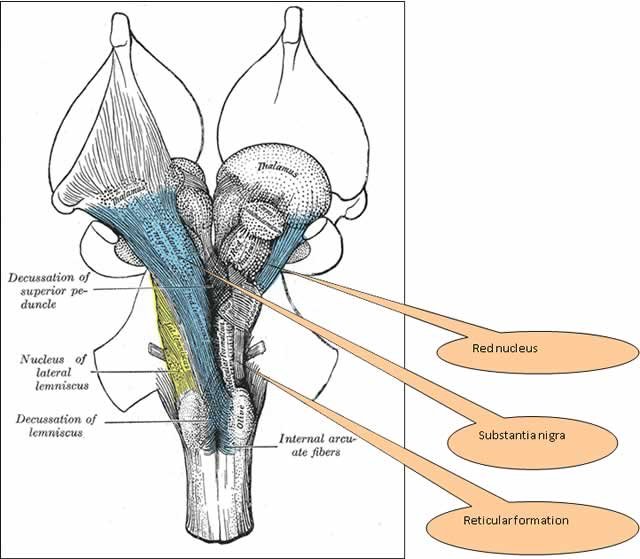 In effect, this disease acts directly on the very parts of the brain guaranteed to give you a spiritual experience.