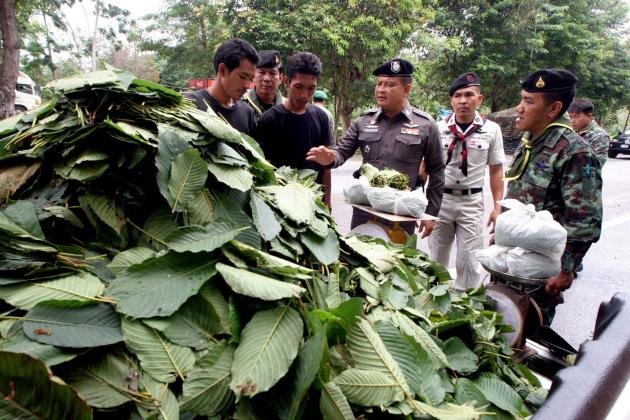 Kratom must be one of the most ambivalent plants on this site.  The correct botanical name for the plant is Mitragyna speciose and it is a plant indigenous to Thailand and Southeast Asia.

It has both therapeutic and abuse potential.

Kratom has been traditionally used in Southeast Asia for its therapeutic and medicinal properties. Lately, Kratom use has spread to Europe and the US, where abuse potential and health hazards increasingly emerge.  This, of course says more about the sorry cultural state of the US and Europe than it does about the plant.

Kratom was largely unknown in the US and Europe until recently and knowledge even then of the plant's existence outside of Southeast Asia was limited to ethnobotanists and a handful of pharmacology researchers.  But if there is a market, there will always be someone ready to exploit it and kratom began to be sold just after 2004, in tacky, exploitive ways by people seeking to make money. As one healer frustrated by these developments said at the time 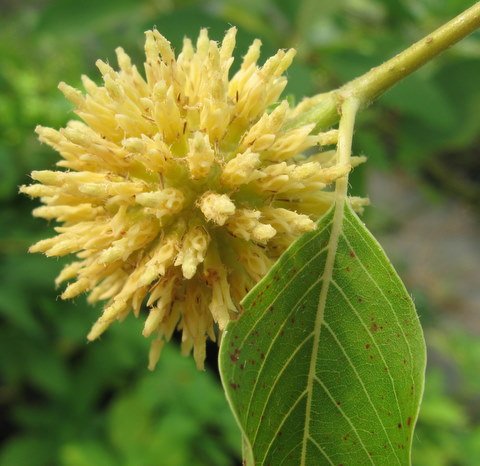 This pattern has sadly repeated itself more times than I care to remember. An interesting healing plant is made available by vendors with integrity and ethics, and sold discretely. Then, some greedy bastard discovers it and sets up a sleazy website and begins aggressively marketing it with no regard for the consequences. Sooner or later, people begin doing stupid things because of a lack of adequate education. The drug comes to the attention of the media or authorities, and eventually is made illegal. It saddens me greatly that people are willing to push kratom in such unethical ways, encouraging reckless use by hyping up how fun it is, promoting it as similar to or better than opium or marijuana, not making the attempt to educate their customers and urge moderation, and advertising in ways so aggressively that it seems inevitable that it will eventually come to the attention of the wrong people.

Some of the chemicals in the plant are agonists for μ-opioid receptors and on the positive side this means it has analgesic properties.  If abused, however, regular consumption may escalate, lead to tolerance and ‘may yield aversive withdrawal effects’ similar to those experienced from withdrawal from morphine, codeine, hydrocodone and other pharmaceuticals based on the opium poppy.

The effect of overdose

“the 15 gram dose gave me an instant hangover with nausea, dizziness, nystagmus, and a sensation of heat”

A dose of 23 grams of kratom on the first try [!] resulted in rapid heartbeat, severe nausea, a sensation that everything was rapidly moving around and through his or her person, and ‘some sort of hallucinogenic activity’ – delirium.  The next bit is not untypical:

“Finally the nausea was just way too much, and I sprinted to the bathroom projectile vomiting. This was now probably 90 minutes into the experience. I was in the bathroom for 1-2 hours, vomiting and heaving, unable/willing to move”. 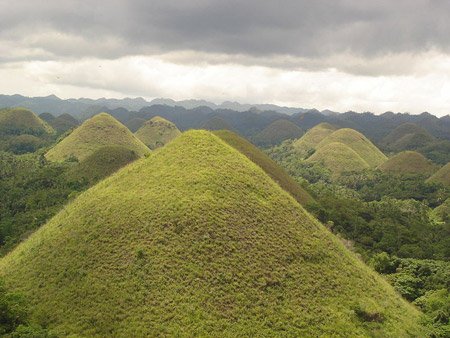 Kratom is an opioid, it is addictive if used frequently.  You build up a tolerance and the withdrawal symptoms are the same as all opioids.  Once a week is too much.  Less than once a month and then only when needed is more reasonable.  ….

One user reported experiencing severe withdrawal after using kratom continually for nearly a year. For most of that time, use was in low doses, one to three times per week, After increasing use to near daily for a few months and noticing tolerance, the user decided to abstain. The resulting withdrawal was described as awful with irritability, restlessness, insomnia, anxiety, aching muscles, fatigue, stomach problems, twitching, bad diarrhea  and  crippling depression.

“I started taking it 2-3 times a day and my tolerance sky rocketed.  At first I only required 3 grams of leaf, it went up to 10 grams.  I started having side effects from my use, like depression. I figured it was time to quit, for real, and I was really scared. Withdrawal has given me days of hell on earth, pure torture of the mind and soul.


In Malaysia, where abuse has occurred, heavy users in some villages chew kratom between 3 and 10 times a day. The new users only need a few leaves to obtain the desired effects, but slowly and inexorably, unless they have real will power you find villagers need to increase doses to 10-30 leaves or even more per day.

Abuse has led to products appearing on the market supposedly based on Kratom and offering 'legal highs'. 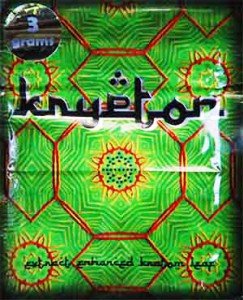 Krypton, available via the internet, consists of powdered Kratom leaves with another mu-receptor agonist, O-desmethyltramadol, added. O-Desmethyltramadol is an active metabolite of tramadol, a commonly prescribed analgesic.  There have been at least 9 deaths from Krypton largely due to respiratory depression.  As one post mortem report said “We believe that the addition of the potent mu-receptor agonist O-desmethyltramadol to powdered leaves from Kratom contributed to the unintentional deaths of the cases presented and conclude that intake of Krypton is not as harmless as it often is described on internet websites”.  Quite.

Mellow gold [and other variations of this name] has been marketed as kratom “imported from Myanmar” (where kratom is illegal). This product was sold to other vendors as well as through Ebotashop. Many exotic botanical retailers around the world carried it.  On analysis, however, it was found not to be kratom, although the actual plant has yet to be identified. 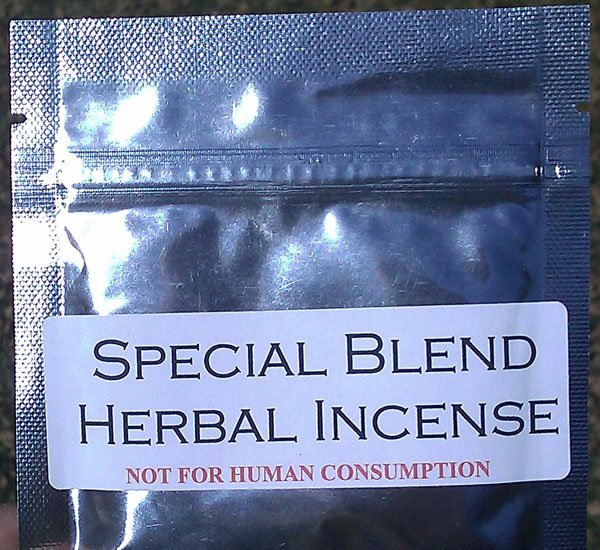 So called Kratom based Herbal mixtures

Herbal mixtures as the source of kratom have proved just as dangerous.  The composition of many products change repeatedly over time as a reaction to prohibition and prosecution of resellers. Therefore neither the reseller nor the consumer of these mixtures can predict the actual content of the  products. Nor the effect.  The concept of selling apparently natural products spiked with potentially dangerous synthetic chemicals/pharmaceuticals is a continuing trend all designed to avoid legislation, which in the end only makes it far more dangerous for any consumer. 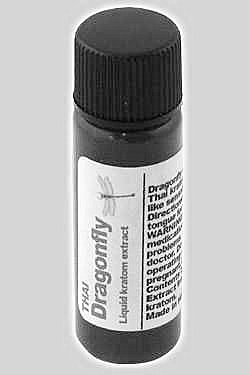 Dragonfly is a powerful liquified extract from Thai Kratom.   If it is done correctly, a liquid extract is carefully prepared by a multiple stage extraction and purification process, in order to extract and purify all the relative and active ingredients

It is taken using a dropper.

But there is little to indicate whether the product is genuine, as there are no controls on its manufacture and the strength is also unknown,  in other words, there is no standard formula or known concentration in these products. As such the potential for overdosing is very very high.

The dried leaves are powdered and boiled in water until a syrup results.  In Malaysia, the syrup is also mixed with the leaves of the palas palm (Lincuala paludosa) and made into pills.  This product is known as madat.  If the syrup is further reduced, a resin extract is obtained which is then shaped  into small balls which are rolled in a material such as flour, then stored until needed.  This is possibly the least dangerous of all the products, but the risk for overdose is very high.

Kratom has been used for hundreds of years by Thai peoples  as a one-off treatment for general pain, as well as muscle aches and illness.  There is considerable justification for its use a key healing medicine, as not only does it relieve pain, but is also anti-viral, anti-bacterial and anti-parasitic.  Research has, for example, found it to have antiHIV activity.  As such to abuse Kratom is nothing short of senseless and, dare I say it, evil!

In a therapeutic context, M. speciosa is also now being used, by those with an understanding of its properties, as a means of gradually weaning people off opiates.  This gradual withdrawal, occasionally combined with ibogaine treatment at a point deemed safe, has been seen to be very effective at helping those with a very serious opiate addiction problem. 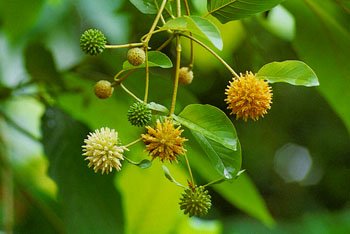 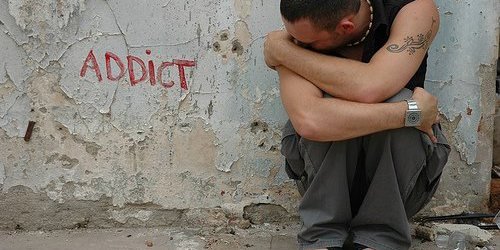