Being bitten or stung by ants, insects or other creatures

There is a difference between a sting and a bite.  A sting is a specific organ on insects or other creatures that delivers venom.  It acts like a hyperdermic needle in that the very sharp point of the sting  pierces the skin and then the venom is injected througb the sting.  In contrast, a bite is achieved via the insect or animals jaws and pierce the skin that way.

Stings and bites can be delivered as a defence [as bees do] or they can be used to kill or immobilise their prey. 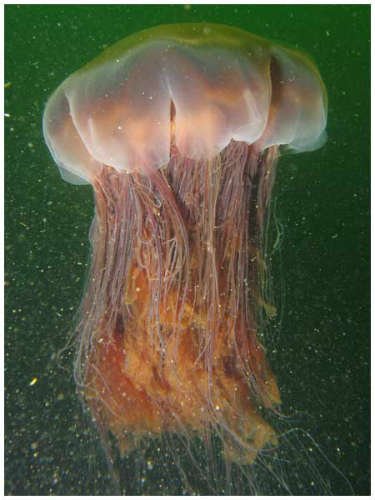 The lion's mane jellyfish, Cyanea capillata,  for example, [see left] is thought to be the largest jellyfish, and arguably the longest animal in the world.  It has fine, thread-like tentacles up to 36.5 metres (120 ft) long which are used to catch their prey.   They have a painful, but rarely fatal, sting.

Jellyfish sting their prey using nematocysts, also called cnidocysts, stinging structures located in specialized cells. Contact with a jellyfish tentacle can trigger millions of nematocysts to pierce the skin and inject venom. When a nematocyst is triggered by contact by predator or prey, pressure builds up rapidly inside it up to 2,000 pounds per square inch (14,000 kPa) until it bursts. A lance inside the nematocyst pierces the victim's skin, and poison flows through into the victim.

Only some species' venom cause an adverse reaction in humans. Sting effects range from no effect to extreme pain to death.  Most jellyfish stings are not deadly, but stings of some species of the class Cubozoa and the Box jellyfish, such as the famous and especially toxic Irukandji jellyfish, can be deadly. An Australian box jellyfish called the sea wasp can kill a grown man in a matter of seconds or minutes.  Stings may cause anaphylaxis, which can be fatal. Medical care may include administration of an antivenom. 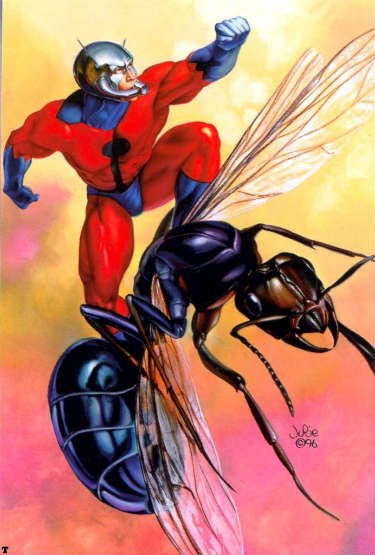 Even beached and dying jellyfish can still sting when touched.   In 2010 at a New Hampshire beach, pieces of a single dead lion's mane jellyfish stung between 125 and 150 people. Jellyfish kill 20 to 40 people a year in the Philippines alone. In 2006 the Spanish Red Cross treated 19,000 stung swimmers along the Costa Brava

And stings and bites can cause hallucinations and quite profound out of body experiences – often near death experiences, principally because the person is ‘near death’.

Believe it or not, some shamanic peoples used to use ant bites in particular to induce hallucinations and out of body experiences.  I have an observation to show this.  The summary table below shows the overall uses by shamanic peoples.

In the first place, these toxins cause great pain as our signalling system tells the brain that something is wrong.  In 2006, it was discovered that tarantula venom activates the same pathway of pain as is activated by capsaicin, the first demonstrated case of such a shared pathway in both plant and animal anti-mammal defense.  It may be that other stings and venoms also use this pathway –see Hot chilli peppers].  There is an effect on epinephrine and norepinephrine but finally endorphins are released which also disinhibit the dopamine pathways, causing more dopamine to be released.
The venoms clearly differ depending on the type of insect, jellyfish, and so on, but in all cases the venom is a toxin – a foreign substance and one which attacks the body’s systems.  The toxin enters the blood stream and the body musters its line of defences sending out its own inflammatory mediators and cytokines from mast cells and basophils, using the blood stream as the pathway.

In the immunologic mechanism, immunoglobulin E (IgE) binds to the antigen (the foreign material that provokes the reaction). Antigen-bound IgE then activates FcεRI receptors on mast cells and basophils. This leads to release of inflammatory mediators such as histamine. These mediators subsequently increase the contraction of bronchial smooth muscles, [so we suffer from shortness of breath], trigger vasodilation, increase the leakage of fluid from blood vessels, and cause heart muscle depression.

The heart rate increases, but blood pressure falls rapidly. We get hypotension.

The contraction of the bronchial smooth muscles can lead to oxygen deprivation and thus the same effects as hypoxia.  The sting or bite often causes anaphylactic shock associated with systemic vasodilation which results in low blood pressure. It is also associated with severe bronchoconstriction to the point where the individual is unable to breathe.

When we are stung, the body sends a signal of both pain to alert the Mind and also a succession of extremely urgent messages that say HELP HELP HELP – we are being attacked – all of us, we are dying DO SOMETHING.

But the Will, in this case,  is unable to do something – it has no learnt function with which to counter the Threat and it is struggling all the time to ensure the Autonomic systems keep going.

Much of our  Reasoning and Memory are not essential functions.  Thus these two functions are actually suppressed as the Will battles to keep us alive.  this is true whatever mechanism is causing the danger - anaphylatic shock, destruction of cells, paralysis and so on.

Needless to say, most of the times that an hallucination or similar is experienced, the person has had no wish to be stung.  But there are some shamans who deliberately roll on ant hills in order to get stung and thus have a hallucinatory experience.  Otherwise most of the examples that follow are accidental spiritual experiences.

John Clare– from the Everyman's poetry collection
What wonder strikes the curious while he views
The black ants' city by a rotten tree
Or woodland bank – in ignorance we muse
Pausing amazed, we know not what we see
Such government and order there to be
Some looking on and urging some to toil
Dragging their loads of bent stalks slavishly
And what's more wonderful – big loads that foil
One ant or two to carry, quickly then
A swarm flocks round to help their fellow men.
Surely they speak a language whisperingly
Too fine for us to hear, and sure their ways
Prove they have kings and laws and them to be
Deformed remnants of the fairy days