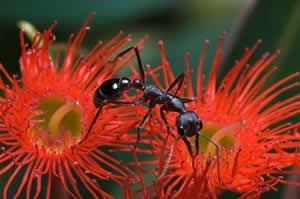 The inchman (Myrmecia forficata) is a species of bull ant that is native to Australia. The ants are recorded in the south eastern part of the country, but are most often found in Tasmania.  The inchman is the most poisonous of the bulldog ants, ……

They sting their victims with venom analogous to stings of wasps, bees, and fire ants. Their venom is some of the most powerful in the insect world. The reputation for being the most venomous ant is possibly due to the tendency of the toxin to induce anaphylaxis. It is this which kills the victim.  The symptoms of the stings of the ants are similar to stings of the fire ants. … The heart rate increases, and blood pressure falls rapidly. In about 3% of cases, the sting causes anaphylaxis.

Hallucinations are not unknown

Anaphylaxis
Being bitten or stung by ants, insects or other creatures
Hypotension
Hypoxia