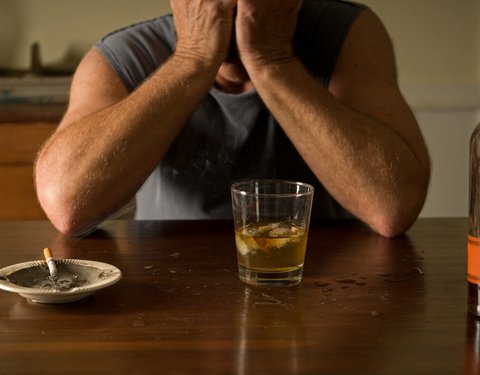 Alcohol acts on the GABAA receptor as an allosteric modulator.  It sedates, it reduces anxiety, it has a slightly hypnotic effect, and it can be calming.  But it is also addictive.

Tolerance to alcohol is developed as the GABAA receptor adapts to the drug by increasing the number of receptors so more of the drug is needed to have the effect. This is a most unusual way for any drug to work.  Most drugs tend to kill off cells when taken in high amounts, but all the GABAA agonists and allosteric modulators, when taken in very high quantities on a regular basis, cause the system to adapt by increasing the receptors and thus toning down the effect of continual intake.

But, if the alcohol is withdrawn, the receptors become hyperactive – stimulated – because there is not enough calming agent – GABA or alcohol or similar to tone down the excitability induced by the glutamate in the body.

The results are highly dangerous and can cause seizures, hallucinations, anxiety, depression,  irritability, hypertension, tachcardia, muscle tension, insomnia and many other symptoms associated with tolerance and withdrawal.  Additionally, the upregulated Calcium Channels are linked to an increase in neuropathy pain. Headaches, migraines and other sorts of sensitivity to pain. 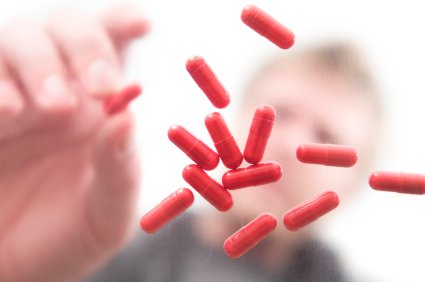 In order to help alcoholics, a class of drug was developed that aims to replace the alcohol - the alcohol treatment drugs.

There are two types of drug that have been developed in this respect:

And these have produced hallucinations, although it is often difficult to tell whether the hallucinations are caused by the drug or the alcohol withdrawal or withdrawal from the drug - it is, in the long term, often the latter.

Substitution therapy for alcoholism: time for a reappraisal?  Chick J, Nutt DJ.;  Health Sciences, Queen Margaret University, Edinburgh, UK.
A number of compounds already in use as medications for various indications substitute for ethanol at clinically relevant brain pathways, in particular, at gamma-aminobutyric acid (GABA) receptors. Nevertheless, although substitute medications have been recognized for heroin and tobacco dependence, patients with alcohol dependence are rarely offered an analogous approach. Benzodiazepines may have paradoxical effects, and abuse and dependence are known.
GABA-ergic anticonvulsants, helpful in treating withdrawal, have yet to emerge as effective in relapse prevention. Clomethiazole and sodium oxybate, the latter having been shown to be effective in relapse prevention, have incurred a reputation for dependence and abuse. However, data have emerged showing that the risk of abuse of sodium oxybate is lower than many clinicians had foreseen. For a condition where existing therapies are only effective in a proportion of patients, and which has high morbidity and mortality, the time now seems right for reappraising the use of substitute prescribing for alcohol dependence

As you can see, it has also not gone unnoticed that drugs like clomethiazole are abused and also bring with them problems of dependence.  On the other hand, the message has not entirely got through to all researchers that drugs are drugs are drugs…………

Medications acting on the GABA system in the treatment of alcoholic patients.  Caputo F, Bernardi M - Department of Internal Medicine, SS Annunziata Hospital, Cento (Ferrara), Italy.
Gamma aminobutyric acid (GABA) represents the major inhibitory neurotransmitter of the central nervous system. Ethanol as well as benzodiazepines (BDZs) and some anticonvulsant drugs directly affect GABAA receptors inducing similar anxiolytic, sedative hypnotic, and anticonvulsant effects.
Since BDZs have proven their efficacy in ameliorating symptoms and in decreasing the risk of seizures and delirium tremens, they are the drugs of choice for the treatment of alcohol withdrawal syndrome (AWS). However, due to their addictive potential and lack of safety when combined with alcohol, BDZs are usually not recommended for the maintenance of alcohol abstinence.
Other GABA-ergic medications represent potentially promising drugs useful in the treatment of AWS and in maintaining alcohol abstinence. Indeed, available studies have demonstrated that clomethiazole, gabapentin and gamma hydroxybutyrate (GHB) present a similar efficacy to BDZs in suppressing AWS.
In addition, current evidence also indicates that gabapentin and GHB do not have significant interactions with ethanol that render them safe to use in maintaining alcohol abstinence. Moreover, gabapentin and valproic acid may be beneficial in maintaining alcohol abstinence in alcoholics with psychiatric co-morbidity.
Pregabalin, neurosteroids, tiagabine, and vigabatrin need further clinical evidence of efficacy, safety and tolerability. Thus, given the importance of GABA-ergic mechanisms in the development and maintenance of alcohol dependence, and the very interesting results currently achieved, more research on GABAergic agents is warranted. 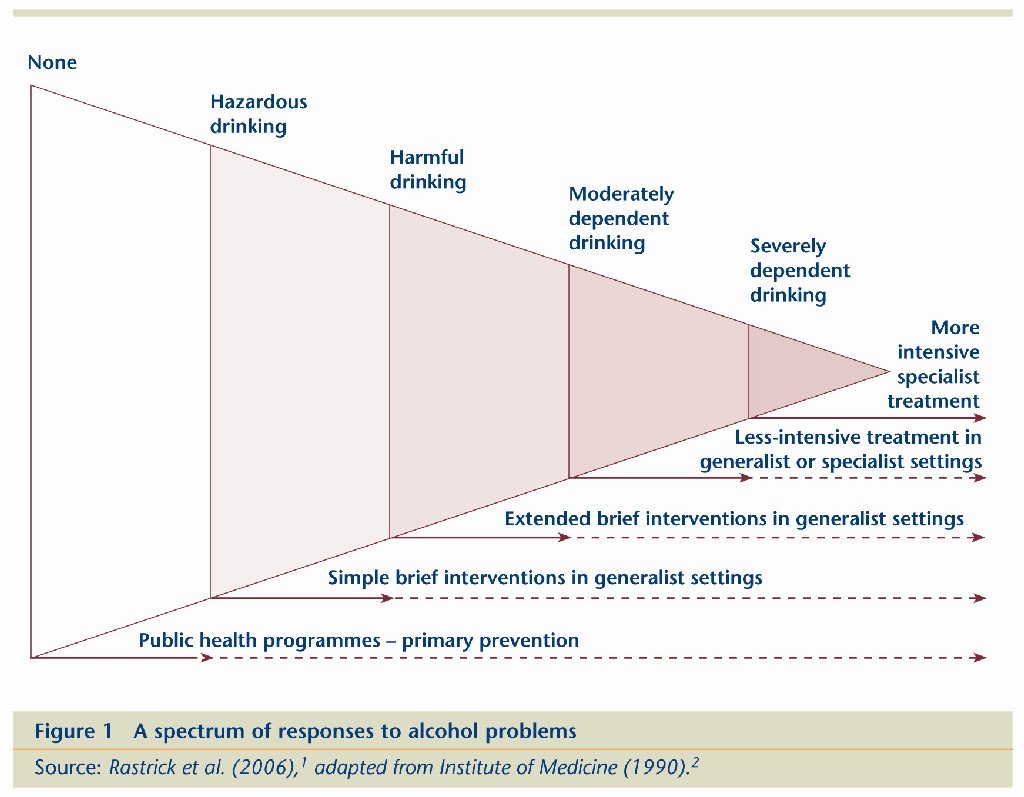 As a small aside, (GHB), also known as 4-hydroxybutanoic acid and sodium oxybate is categorized as an illegal drug in many countries.  It is currently regulated in Australia and New Zealand, Canada, most of Europe and in the US. GHB has been used in a medical setting as a general anaesthetic, but has also been used as an intoxicant (illegally in many jurisdictions) or as a date rape drug.
If you were an alcoholic trying to get off the alcohol, which would you prefer – a gradually reducing supply of 1989 Beaujolais or a date rape drug?
There is one advantage of some of these drugs – some not all  - over alcohol as the means of withdrawal and that is that they give the liver a chance to recover.

A glance at the eHealthme site which reports on the actual side effects reported by doctors as experienced by their patients describes common side effects as follows: 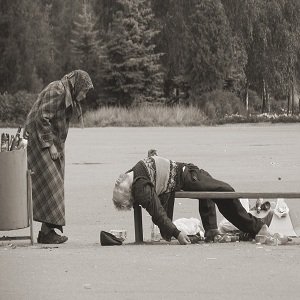 Why do these drugs produce hallucinations, visions, near death experiences etc?

All the drugs in this class are potentially addictive.

All of them produce sedative effects just like alcohol which they mimic.  So ultimately the hallucinations being experienced in theory from these drugs is actually not caused by the drugs but by withdrawal from the drugs.

And here the experiences mimic those of alcohol withdrawal with delirium tremens, wild hallucinations and so on.

But Xyrem may produce hallucinations for a different reason. Xyrem is the sodium salt of γ-hydroxybutyric acid (GHB).  The section on this drug should help in explaining why hallucinations occur with Xyrem

Ann Emerg Med. 1998 Jun;31(6):723-8.  A tale of novel intoxication: seven cases of gamma-hydroxybutyric acid overdose.  Li J1, Stokes SA, Woeckener A.
We describe seven patients presenting with combination substance abuse involving gamma-hydroxybutyric acid (GHB)……………. All patients presented with acute delirium and transient but severe respiratory depression. …….. Two findings are remarkable …... The first is the observation of a peculiar state of violent aggression present on stimulation of the GHB-intoxicated patient despite near or total apnea. .....The second is the observation of ECG abnormalities in several cases, including U waves in five patients.  PMID:  9624312

[Driving under the influence (DUI)]

The table below shows the summary of the number of hallucinations according to eHealthme.  The link provided with each drug takes you to the eHealthme site and shows the side-effects of each drug, as compiled from actual patient reports and experiences