Over 12 pages – we have had to shorten this to get to the essence.  There is a most important link here to the Kabbalah and the Sephirot.  The central route - which has the tendency to produce a mystic is the Path of the Stars

The central column implies balance and is the path to the symbolic stars.  Notice how in the Freemasonry symbol, based on the Sephirot, Keter is simply shown as the set square [upturned triangle] intersecting with the downturned 'protactor'. 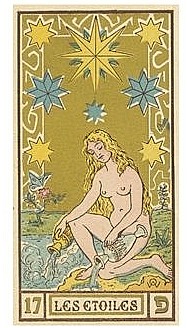 We are plunged in a dark night, but when we cast our glances towards the sky, we see the Stars shining brightly.

These lights above encourage us and make us feel that we are not abandoned, since what the gods originally called 'the shining ones', watch over us. They direct us with the aim of our fulfilling our destiny, for we have a task in our limited life, no one being created without his destiny being traced in its broad outlines, without its aim being assigned to the earthly traveller.  A mysterious route map marks the essential stages of our pilgrimage, as if the coin of justice of the Anounnaki had made a decree on our account by fixing our destiny.

If we followed our programme faithfully, life would be what it should be for us. We complicate it by our intractability which awards us the hardships of which we complain; life is not cruel in principle, but its aim is not our pleasure: it has its task and asks us to accomplish ours.

...............She is a gentle and lovely goddess like the naked girl in arcana 17 who, kneeling at the edge of a pond pours into it the contents of a golden urn, from which flows a burning liquid to give life to the stagnant water. To this vessel held in the right hand corresponds another which the left hand is tipping up to pour out onto the arid earth a fresh and fertilizing water. This second receptable is silver; like the first it is inexhaustible. The constant watering supports the vegetation, represented more exactly by a branch of acacia and a rose in bloom.

The mimosa of the desert, acacia resists desiccation; its persistent green colour indicates a life which refuses to be extinguished, hence its character with the emblem of hope in immortality. In the legend of Hiram this plant reveals the tomb of the Master, the keeper of lost tradition. In order to assimilate this secret, the adept must make the deceased Wisdom relive in himself. To this effect he must imitate Isis who travels throughout the world in search of the remains of her husband's body. These precious remains are gathered by the thinker who knows how to discern the truth hidden under a pile of superstitions which the past has bequeathed to us.

The spiritual corpse of a god who once enlightened the world, survives, shared out among the ignorant crowds, in the form of enduring beliefs in spite of their contradiction to accepted orthodoxies. Far from spurning these disfigured remains of a lost knowledge, the Initiate collects them together carefully in order to set up in its entirety the body of the dead doctrine. Once it is re-established in its synthesis, this doctrine becomes capable of being revived, like Hiram or Osiris. But without the acacia to reveal phenomena to us, how could we know where to search in the soil?

The discreet verdure which, in the East, decorates the abandoned tombs contrasts with the rose which blooms joyously in our gardens. As the symbol of all that embellishes earthly life, this flower of love and beauty is reflected in the pond, the reservoir of the vital fluids. Psyche's butterfly landed on the corolla with the suave perfume of delicate feelings, which is lit up by a refined intelligence which has managed to free itself from all coarseness. The rose of arcana 17 is that of the knights of the spirit, a flower which will be placed on the cross with the wood provided by the acacia. Then faith will cease to be blind, religious feeling and philosophical meditations will harmonize to the satisfaction of the souls which are anxious to believe with discrimination.

But the dawn of comprehension which is reserved for the Initiated does not yet dispel the darkness of human intellectuality, although we can see the stars of our night sky pale before the brilliance of one of them, Lucifer, the Light-bearer, otherwise known as Venus or the star of the morning. This heavenly body is the great star of arcana 17 which sends forth green lights between its eight golden rays. The colour of Venus thus matched the octagon of Ishtar, the goddess par excellence of the Chaldeans. These people made the stars divine, so that in their primitive writing the ideograms read as 'god'. This sign was maintained by the Assyrians as a definite article to the divine names that its precedes; but the star with eight rays remained the sacred emblem of Ishtar, a popular divinity, the recipient of the most fervent devotion of mortals.

The young maid in arcana 17, she, too, seems to be an incarnation of the great feminine divinity whom our distant ancestors have adored. She is the personification of earthly life in what is winning and charming about it; she is kind Nature, merciful and beautiful, the mother who is eternally young, who becomes the lover of the living.

This earthly life, which we love more than anything in spite of the material slavery to which it binds us, leaves us plunged in a darkness which would be complete if it were not for the stars in the firmament. The stars symbolize the obscure light from which the humble in their spiritual aspirations benefit.

The children of nature turn towards the ideal with a spontaneous piety which comforts them in their aim of accomplishing their earthly task. Sanctifying what pertains to life, they make this life divine. Would that we could appreciate the sound beauty of their religious conception, truer in its simplicity than our ambitious systems, complicated by disturbing metaphysics.

….we have each one of us our star which is the receptacle through which the influences of the stars filter in order to be concentrated in us. This personal star is blue like the two other bigger ones, placed a little higher on the right and the left. They are the condensers of the influences which are exerted on the soul which they illumine mysteriously, the blue star on the right gathering what is addressed to the conscience and to Reason (Sun) and the one on the left gathers in the intuitions of feeling and imagination (Moon).