Wirth contrasts ordinary death with Rebirth and Annihilation.  His explanation is one of the few to acknowledge the existence of the two latter forms, although the card pictorially shows Rebirth more than Annihilation. 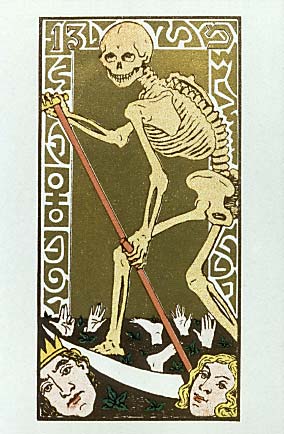 What 'is' changes its aspect but is never destroyed: everything persists by being changed indefinitely by the action of the great transformer to whom individual beings owe their origin. By decomposing forms that have worn out and are incapable of fulfilling the job for which they were destined, this agent intervenes as a rejuvenator since he sets free energies which are destined to enter into new combinations of life. We owe our transitory existence to what we call Death. It allowed us to be born and can lead us to rebirth.

Far from killing, Death revives by dissociating what can no longer live. If it were not for the intervention of Death everything would wilt, so that life finally would not be distinguishable from the common image of Death. So it is quite right that arcana 13 should relate to the active generator of Universal Life, permanent life, of which Temperance (arcana 14) symbolizes the moving dynamism, whereas the Devil (arcana 15) shows its static accumulation.

The profane must die to be reborn to the superior life which initiation confers. If he does not die in his state of imperfection, then all progress in initiation is denied him.

'To know how to die' is therefore the great secret of the Initiated, for, by dying he frees himself from what is inferior to rise through sublimation. The true wise man therefore strives constantly to live better. That does not imply any practice of a sterile asceticism on his part, but if he wants to achieve an intellectual autonomy, must he not break with the prejudices which are dear to him and so die to his usual way of thinking?

To be born to freedom of thought one must free oneself by being dead to all that is contrary to the strict impartiality of judgement. This voluntary death is demanded of the Freemason so that he can say that he is 'born free' as he strikes the door of the Temple.

The symbolism, unfortunately, remains a dead letter, the recipient for the most part, not having the least idea of what his passage through the funeral cave, called the Room of Reflexion, signifies……….

Imprisoned in a hermetically sealed container, hence isolated from all outside living influence, the subject dies and putrefies. It is at this point that the colour black appears, symbolized by Saturn's crow which is a good augur at the beginning of operations of the Great Work.

'If you do not see this blackness in the first instance predominant over all other colours, then you must have failed in the work and must begin again!'

In accordance with all the Hermetic philosophers, Nicholas Flamel urges the would-be Initiate to withdraw from the world and to forget his frivolities in order to enter the path of progressive changes within oneself which lead to true initiation.

The first implies an incubation similar to that undergone by the chick (in the egg), whose shell he finally breaks. The mystic must withdraw into himself in the darkness of the 'Philosophers' Egg' with a view to conquering light and liberty. One must die in a dark prison in order to be reborn to a life of independence and light.

The new life achieved is not an existence of triumphant rest: it imposes continuous tasks, rich and glorious, the reward of which is the second death. Not content with freeing himself from his coarsest surroundings, the initiate dies this time more profoundly than at the beginning of his initiation, for he dies to himself, to his own personality, to his radical self.

His renunciation, however, is not that of the ascetic, who has become indifferent to his own and to the fate of others. How would the Initiate, having died twice, despise human lives, when he only came back to life in order to live for them? If he has become one with the Great Being who becomes particularized in us, it is in order to share his infinite love.