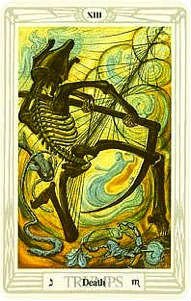 In the majority of the Tarot cards  Death symbolises rebirth - the death of the old you and the modelling of a new you.  Its position in the Tarot card pack is approximately correct for this interpretation, as it is not at the end of the pack but about mid way in what would be the spiritual path.  Functionally we lose old function and are given new functions.  Thus it is a sort of waking software/functional update.

If we continue with this analogy it is also not a bug fix, it is the implementation of a new version of the software which if you see what happens to your computer usually involves a shutdown and a restart and that is what happens during a rebirth – that is exactly how it feels – a shut down, a sort of death, and afterwards, a restart as a new you functionally; you are really not sure you are the same person. Often you are not.

As Crowley's card shows, a sort of hacking about getting rid of all the dross.

There are some versions of the Tarot where death is placed higher and again Death is not  death, but this time may mean the death of the ego following annihilation.

Symbolically, however, this state is better shown by the Fool.