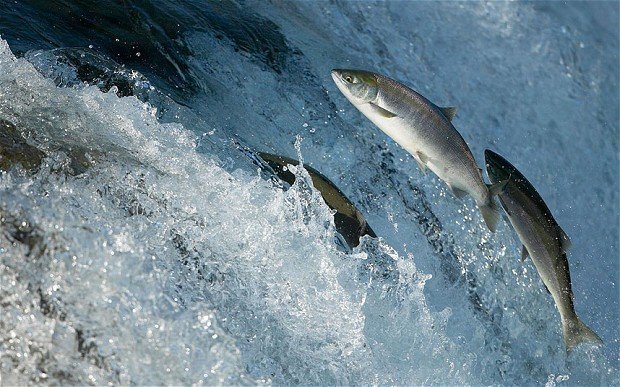 Salmon is the common name for several species of fish in the family Salmonidae.

Other fish in the same family include trout, char, grayling and whitefish.

Salmon are native to tributaries of the North Atlantic (genus Salmo) and Pacific Ocean (genus Oncorhynchus).

The North Atlantic salmon (genus Salmo) is a single species, however, there are a number of Pacific salmon, including 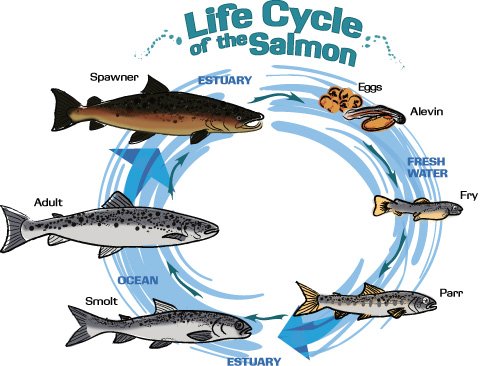 Most wild salmon are born in fresh water, migrate to the ocean, then return to fresh water to reproduce. ‘Folklore has it that the fish return to the exact spot where they were born to spawn’; and tracking studies have shown this to be true, which means that salmon have both memory or perceptions and homing behaviour which lies outside our current understanding.  Salmon eggs are laid in freshwater streams typically at high latitudes. The eggs hatch into alevin or sac fry. The fry quickly develop into parr with camouflaging vertical stripes. The parr stay for six months to three years in their natal stream before becoming smolts, which are distinguished by their bright, silvery colour with scales that are easily rubbed off. Only 10% of all salmon eggs are estimated to survive to this stage. The smolt body chemistry changes, allowing them to live in saltwater. Smolts spend a portion of their out-migration time in brackish water, where their body chemistry becomes accustomed to salty water and then they leave for the ocean. 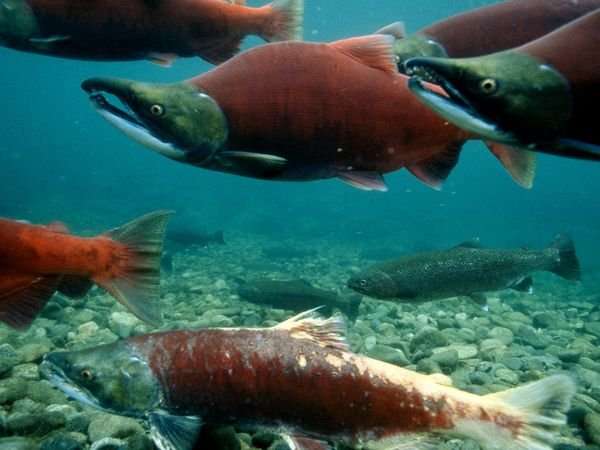 The salmon spend about one to five years (depending on the species) in the open ocean, where they gradually become sexually mature. The adult salmon then return primarily to their natal streams to spawn. Atlantic salmon spend between one and four years at sea. (When a fish returns after just one year's sea feeding, it is called a grilse in Canada, Britain and Ireland.) Prior to spawning, depending on the species, salmon undergo changes. They may grow a hump, develop canine teeth, develop a kype (a pronounced curvature of the jaws in male salmon). All will change from the silvery blue of a fresh-run fish from the sea to a darker colour.

Salmon can make amazing journeys, sometimes moving hundreds of miles upstream against strong currents and rapids to reproduce. Chinook and sockeye salmon from central Idaho, for example, travel over 900 miles (1,400 km) and climb nearly 7,000 feet (2,100 m) from the Pacific Ocean as they return to spawn. Condition tends to deteriorate the longer the fish remain in fresh water, and they then deteriorate further after they spawn. In all species of Pacific salmon, the mature individuals die within a few days or weeks of spawning. Between 2 and 4% of Atlantic salmon kelts survive to spawn again, all females. However, even in those species of salmon that may survive to spawn more than once, postspawning mortality is quite high. 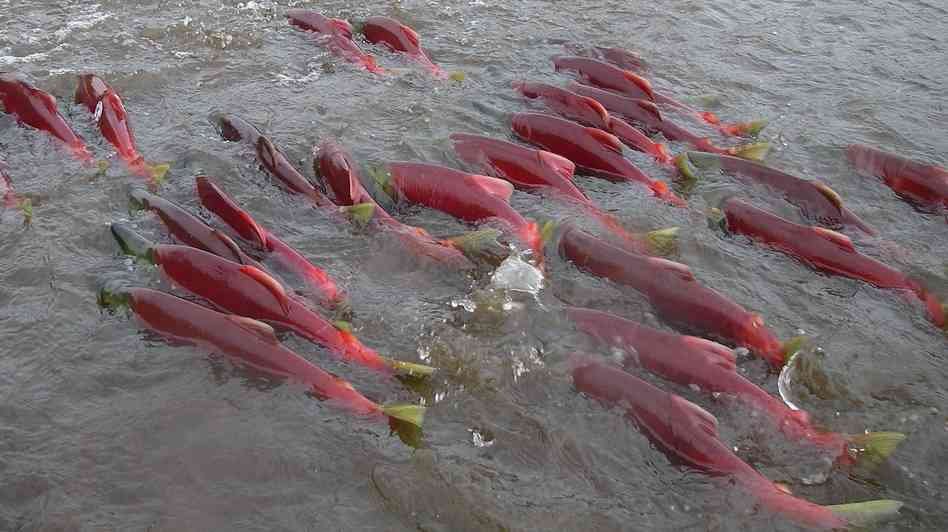 To lay her roe, the female salmon uses her tail (caudal fin), to create a low-pressure zone, lifting gravel to be swept downstream, excavating a shallow depression, called a redd. The redd may sometimes contain 5,000 eggs covering 30 square feet (2.8 m2). The eggs usually range from orange to red. One or more males will approach the female in her redd, depositing his sperm, or milt, over the roe. The female then covers the eggs by disturbing the gravel at the upstream edge of the depression before moving on to make another redd. The female will make as many as seven redds before her supply of eggs is exhausted. 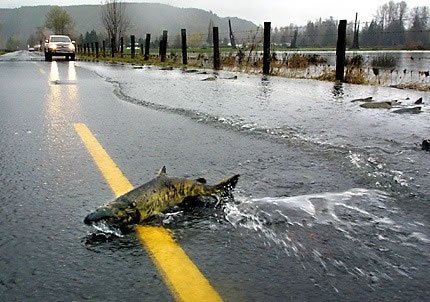 Freshwater streams and estuaries provide important habitat for many salmon species. They feed on terrestrial and aquatic insects, amphipods, and other crustaceans while young, and primarily on other fish when older. Thus reduction in insect supply and reduction in other fish can damage the balance.  Eggs need cool water and good water flow (to supply oxygen) to the developing embryos. Thus global warming and pollution can take their toll.  Mortality of salmon in the early life stages is usually high due to natural predation and human-induced changes in habitat, such as siltation, high water temperatures, low oxygen concentration, loss of stream cover, and reductions in river flow. Estuaries and their associated wetlands provide vital nursery areas for the salmon prior to their departure to the open ocean and estuaries can be heavily polluted. 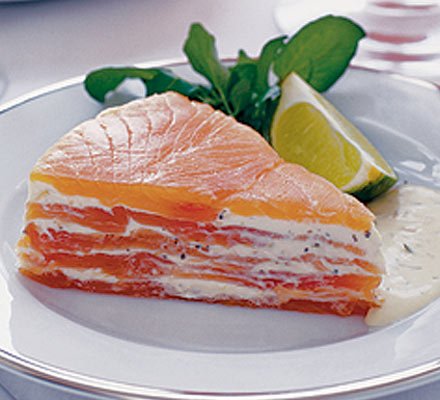 Salmon are a keystone species, supporting wildlife such as birds, bears, beavers and otters.  Thus any collapse in salmon stocks affects the entire eco-system.  Interestingly, it can also affect woodland, as the animals that feed on the fish deposit faeces and urine “in densities that can reach 4,000 kilograms per hectare, providing as much as 24% of the total nitrogen available to the riparian woodlands”.

Landlocked salmon (Salmo salar m. sebago) live in a number of lakes in eastern North America and in Northern Europe, for instance in lakes Sebago, Onega, Ladoga, Saimaa, Vänern and Winnipesaukee. They are not a different species from the Atlantic salmon, but have independently evolved a non-migratory life cycle. A land-locked subspecies known as the Taiwanese salmon or Formosan salmon (Oncorhynchus masou formosanus) is found in central Taiwan's Chi Chia Wan Stream.  The Danube salmon or huchen (Hucho hucho), is the largest permanent fresh water salmonid species.  Species in these landlocked areas are particularly vulnerable to pollution.

The Columbia River salmon population, for example, is now less than 3% of what it was when Lewis and Clark arrived at the river.  Government ineptitude, over fishing, Salmon canneries, pollution and dams have all taken their toll.  “very few salmon reach the spawning grounds, and probably four years hence the fisheries will amount to nothing”.  On the Columbia river the Chief Joseph Dam completed in 1955 completely blocks salmon migration to the upper Columbia River system.  The Fraser River salmon population was affected by the 1914 slide caused by the Canadian Pacific Railway at Hells Gate. The 1917 catch was one quarter of the 1913 catch.

Not only are the salmon numbers dwindling, but the health of the stocks is also deteriorating.  According to Canadian biologist Dorothy Kieser, the myxozoan parasite Henneguya salminicola is now commonly found in the flesh of salmonids. The fish's autonomic system responds by walling off the parasitic infection into a number of cysts that contain milky fluid. This fluid is an accumulation of a large number of parasites.
"the fish that have the longest fresh water residence time as juveniles have the most noticeable infections. Hence in order of prevalence coho are most infected followed by sockeye, chinook, chum and pink." According to Klaus Schallie, Molluscan Shellfish Program Specialist with the Canadian Food Inspection Agency,
"Henneguya salminicola is found in southern B.C. also and in all species of salmon. I have previously examined smoked chum salmon sides that were riddled with cysts and some sockeye runs in Barkley Sound (southern B.C., west coast of Vancouver Island) are noted for their high incidence of infestation." 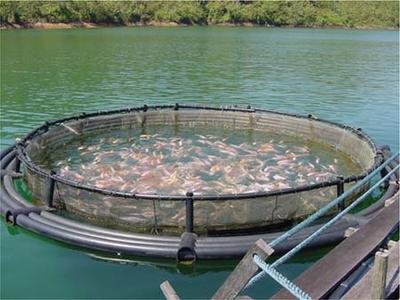 Sea lice, particularly Lepeophtheirus salmonis and various Caligus species, including C. clemensi and C. rogercresseyi, can cause deadly infestations of both farm-grown and wild salmon. Sea lice are ectoparasites which feed on mucus, blood, and skin.  “Large numbers of highly populated, open-net salmon farms can create exceptionally large concentrations of sea lice; when exposed in river estuaries containing large numbers of open-net farms, many young wild salmon are infected, and do not survive as a result.”

Of 435 wild stocks of salmon and steelhead, in Washington state, for example, only 187 of them were classified as healthy; 113 had an unknown status, one was extinct, 12 were in critical condition and 122 were experiencing depressed populations.

Fish farming of salmon has other problems.  Salmon are carnivorous. They are fed a meal produced from catching other wild fish and other marine organisms. Salmon farming leads to a high demand for wild forage fish. Salmon require large nutritional intakes of protein, and farmed salmon consume more fish than they generate as a final product. To produce one pound of farmed salmon, products from several pounds of wild fish are fed to them. As the salmon farming industry expands, it requires more wild forage fish for feed, at a time when 75% of the world's monitored fisheries are already near to or have exceeded their maximum sustainable yield. The industrial-scale extraction of wild forage fish for salmon farming affects the survivability of the wild predator fish which rely on them for food.

Work continues on substituting vegetable proteins for animal proteins in the salmon diet. This substitution results in lower levels of the highly valued omega-3 fatty acid content in the farmed product.

Intensive salmon farming uses open-net cages, which have low production costs. It has the drawback of allowing disease and sea lice to spread to local wild salmon stocks.

Farm-raised salmon are fed the carotenoids astaxanthin and canthaxanthin to match their flesh colour to wild salmon. 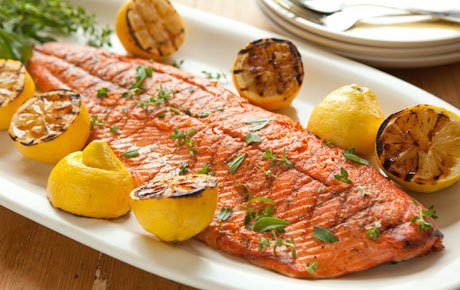 Despite all the problems, salmon is still a popular food. Classified as an oily fish, it is considered to be ‘healthy’ due to the fish's high protein, high omega-3 fatty acids, and high vitamin D[83] content. Though how healthy it is, seems to be dependent on where it was obtained.  According to reports in the journal Science, farmed salmon may contain high levels of dioxins. PCB (polychlorinated biphenyl) levels may be up to eight times higher in farmed salmon than in wild salmon.

The tragedy of all this is that salmon is almost a complete food.  All it needs is a slice of lemon for the vitamin C and you have a virtually mineral, vitamin and amino acid complete meal.