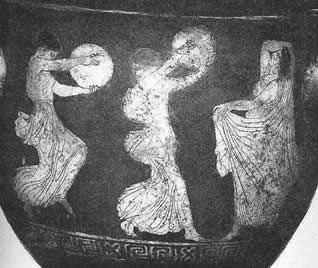 The term "tarantella" originally referred to a dance ritual that existed in Greece around the year 2000 BC and was connected to the gods Dionysos and Apollo (the Greek gods of wine and music).

It continued on in southern Italy, an area known as Magna Grecia (greater Greece).   The Tarantella dance supposedly derives from people mimicking the effects of being bitten by a spider, but I suspect this is just apocryphal.

The Tarantella is a dance in which the dancer and the drum player constantly try to upstage each other by dancing longer or playing faster than the other, driving one another to exhaustion

The dance uses very rhythmic and fast music. The tradition is still present in the area, and is known as "Neo-Tarantism.” Many young artists, groups and famous musicians are attempting to keep the tradition alive. The music is different, but has similar hypnotic effects, especially when people are exposed to the rhythm for a long period of time. The music is used in the therapy of patients with certain forms of depression and hysteria, and its effects on the endocrine system recently became an object of research 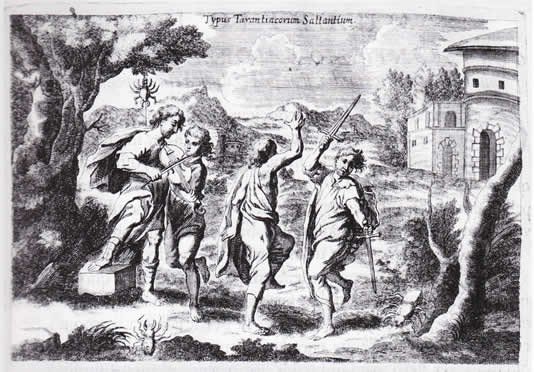 This picture is from Athanasius Kirchner’s book Phonurgia Nova. You can see the implied involvement of the spider in the bottom of the picture, but it is fairly clear from the organised way in which they are dancing that they were not bitten by the spider, they just danced in the rather frenetic way one does when bitten by anything which hurts and poisons.  Personally I don’t think they’re being frenetic enough, but there you go … some like rave, some like the waltz!!