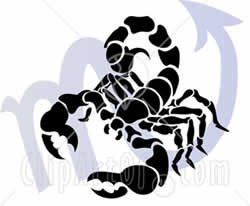 A scorpion can represent one of the signs of the Zodiac – Scorpio.

It can also be a symbol for the kundalini experience – the sting in the tail! 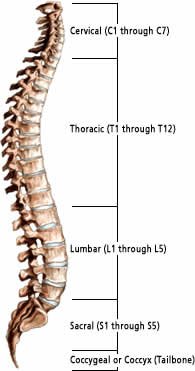 The meaning of the symbolism of the scorpion and the constellation Scorpio is largely the same.  Although the general name used is Scorpio, the Latins occasionally wrote the word Scorpius, whilst other Roman writers; Cicero, Ennius, Manilius, and perhaps Columella gave the kindred African title Nepa, or Nepas.

In broad terms, a scorpion is symbolically equivalent to a tester-  something or somebody that tests the feasibility of a person or a new increment in evolution – a change whether major or minor.  They may by their very nature be destroyers - destruction testing in other words.

In legends for example, built on this idea, Skorpios (Scorpius) was a giant scorpion sent by the earth-goddess Gaia to slay the giant Orion when he threatened to kill all the beasts of the earth. The Scorpion stung Orion on the heel and killed him. These two opponents Orion and the Scorpion were placed amongst the stars as their namesake constellations, but are positioned on opposite sides of the sky.  Orion was in this case representing an agent of change and the change is mythologically being tested and found wanting.

14 And the Lord God said unto the serpent, Because thou hast done this, thou art cursed above all cattle, and above every beast of the field; upon thy belly shalt thou go, and dust shalt thou eat all the days of thy life:
15 And I will put enmity between thee and the woman, and between thy seed and her seed; it shall bruise thy head, and thou shalt bruise his heel.”

This idea of constant opposition is embodied in the entymology of the roots of the word scorpion.  The Greek word for 'scatter' for example, is skorpizo  - dissipate, i.e. (figuratively) put to flight, waste, and  diaskorpizo 'to scatter abroad,'.  And skopos means to pierce.  From the same root we also find words such as skeptic emerge.

Manilius in his Astronomica, 1st century AD, associated Scorpio with “a  spirit which rejoices in plenteous bloodshed and in carnage more than in plunder.”  He goes on to say that “these men spend even peace under arms” and that when there is nothing to oppose “ they sell their persons to provide the spectacle of death and to perish in the arena”. In other words a person who is of a natural Scorpio temperament is spoiling for a fight  “There are those, too, who enjoy mock-fights and jousts in arms (such is their love of fighting) “

It is somewhat sad that the scorpion is thought of in this way, because as our film on youtube shows it is no more aggressive than anything else being attacked.  Even a mule under duress gives a powerful kick

It is worth noting that for some centuries before the Christian era, Scorpio was the largest of the zodiac figures, forming with the Khelai, its Claws, — the prosectae chelae of Cicero, now our Libra.  Testing, judgement and destruction.