A paten, or diskos, is a small plate, usually made of silver or gold, used to hold Eucharistic bread which is to be consecrated. It is generally used during the service itself, while the reserved sacrament are stored in the tabernacle in a ciborium. 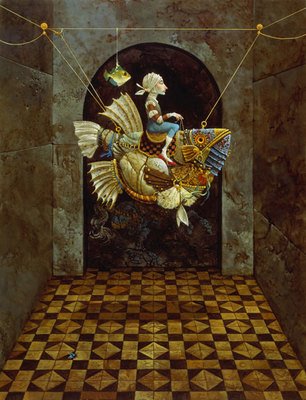 ONE FlNE DAY when they had celebrated their Masses, a pillar in the sea appeared to them that seemed to be not far distant. Still it took them three days to come up to it. When the man of God approached it he tried to see the top of it - but he could not, it was so high. It was higher than the sky.

Moreover a wide-meshed net was wrapped around it. The mesh was so wide that the boat could pass through its openings. They could not decide of what substance the net was made. It had the colour of silver, but they thought that it seemed harder than marble. The pillar was of bright crystal.

Brendan spoke to his brothers:

'Ship the oars and take down the mast and sail. Let some of you at the same time take hold of the meshes of the net.'

There was a large space, roughly about a mile, at all points between the net and the pillar, and likewise the net went down a similar distance into the sea. When they had done what they had been ordered, the man of God said to them :

'Let the boat in through one of the meshes, so that we can have a close look at the wonders of our creator.'

When they had gone in and looked around here and there, the sea was as clear to them as glass, so that they could see everything that was underneath.

They could examine the foundations of the pillar and also the edge of the net lying on the sea bed.

The light of the sun was as bright below as above the water.

Then Saint Brendan measured the four sides of the opening of the net: it was about six to seven feet on every side"

They then sailed throughout the whole day near one side of the pillar and in its shadow they could still feel the heat of the sun. They stayed there until three o'clock. The man of God kept measuring the one side. The measurement of each of the four sides of that pillar was the same, namely about seven hundred yards. The venerable father was engaged for four days in this way around the four angles of the pillar.

On the fourth day, however, they found a chalice, of the same substance as the net, and a paten, of the same colour as the pillar, lying in a window in the side of the pillar facing the south. Saint Brendan took hold of these vessels immediately, saying:

'Our Lord Jesus Christ has shown us this wonder, and given me these two gifts, so that the wonder be manifested to many in order that they may believe.'

Then the man of God ordered his brothers to perform the divine office and then refresh their bodies, for they had had no slack time in which to take food or drink since they had seen the pillar.

When the night was over the brothers began to row towards the north. When they had passed through an opening in the net they raised the mast and sail, while some of the brothers still held the meshes of the net until all was made ready on the boat. When the sail had been spread, a favouring wind began to blow behind them so that they did not need to row but only to hold the ropes and rudder. So their boat was borne along for eight days towards the north.