Pordage, John - The Deity is not solitary or unattended

John Pordage himself drew a diagram of what he ‘saw’.  The black spot in the centre of the circle represented the eye of eternity and the black points with which ‘the whole circumference was filled’ represented the ‘pure simplified spirits’ he described.

He described the spirits as ‘numberless and distinct from one another’, like stars in the firmament.

You must not think that the Deity is solitary or unattended … for there are innumerable pure simplified spirits that stand ready in humble resigned obedience to execute the will and perform the pleasure of the Father of spirits. 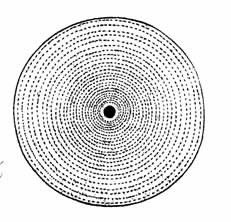 ..............The simplified spirits are generated by God out of himself, in the likeness of himself, and for himself.  How were they generated by God?  This I confess is a great mystery, but we can say that these simplified spirits did from all eternity exist ideally in the eye of eternity, and these ideas were actually manifested before all worlds, for they are ideas conceived in the divine mind, which then desired that they come into being.