The achievement of the goals of the hero is reflected in the Tarot cards of some packs, where the ‘Chariot’ shown is actually in many cases one of the Triumphal cars used in the procession.  Alternate names for the Chariot card VII are Victoriae Premium – the Reward of Victory; and the Triumphal Car.  Thus this Tarot card is symbolic of the Reward for the achievement of the hero’s challenge.

But, this is very different in symbolism to the cards by Rider Waite and Crowley which go back to source and the Upanishads.  To a large extent, these cards are not symbolically 'correct', if we can ever say something as subjective as this is correct.

In the earliest Italian sources, the card is referred to as "Il Carro" (the Chariot), or sometimes "Il Carro Triumphale" (the Triumphal Chariot). In most designs, the card shows the predictable figure of a regal warrior in a chariot drawn by two horses. He usually holds a sceptre, sword, or orb.  He is even sometimes crowned, which is not right at all symbolically.

Of great interest is that in the Minchiate and Visconti-Sforza cards, the figure is female. The Visconti-Sforza charioteer looks like the other noble women depicted in this deck; it is possible that she is Bianca Maria Visconti and given they commissioned the cards the card was representing what she wanted it to. The Minchiate version shows a nude maiden holding a banner or stretch of drapery. In a sense she is thus the personification of victory and the hero figure at the same time. 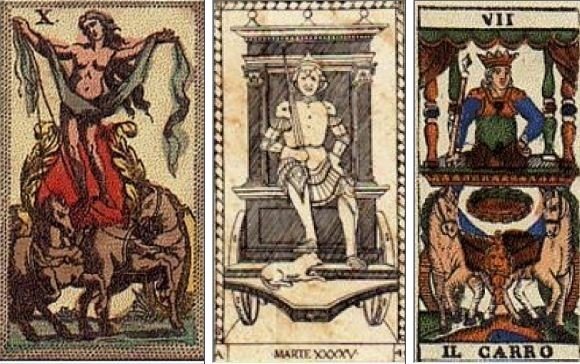