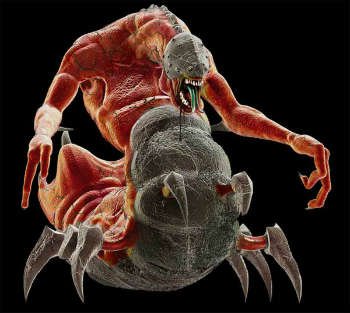 Goblins are the spirit beings of viruses.  This is why goblins are universally regarded as nasty.  From an evolutionary point of view however they are essential both in the destruction phases of species but also in the evolutionary phases.

in isolation viruses are inert and harmless, but introduce them into a suitable host and thy burst into life.  About 5000 types of virus are known and …. they afflict us with many hundreds of diseases ranging from flu and common cold to smallpox, rabies, yellow fever, ebola, polio and AIDS.

Viruses prosper by hijacking the genetic material of a living cell and using it to produce more virus.  They reproduce in a fanatical manner, then burst out in search of more cells to invade.  Not being living organisms themselves, they can afford to be very simple.  Many, including HIV, have ten genes or fewer, whereas even the simplest bacteria require several thousand.  They are also very tiny, much too small to be seen with a conventional microscope.  It wasn't until 1943 and the invention of the electron microscope that science got its first look at them.  But they can do immense damage.  Smallpox in the 20thC alone killed an estimated 300 million people.

Ebola, Lassa and Marburg fevers  have all tended to flare up and die down again …...... and it is apparent that the virus which causes AIDS has been among us much longer than anyone originally suspected.  Lassa fever, detected in 1969 in West Africa, is extremely virulent and little understood.

Viruses also have an unnerving capacity to burst upon the world in some new and startling form and then to vanish again as quickly as they came.

Viruses can also produce hereditary changes in a cell – mutations – so they are not just the agents of destruction but the agents of minor evolutionary change – tweaking for example to improve the design.