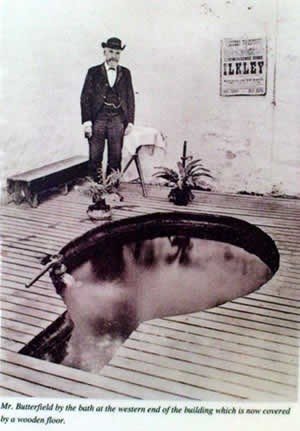 ……….Overlooking the Cow and Calf is Fairy Kirk or Fairy's House, so named because in Saxon times a planned church was never built when ‘poltergeist activity’ made construction impossible. …………..

Five centuries later the old quarries here were replaced by a favoured spa, where spring water was used as the basis for a healing baths. These White Wells were used right into the twentieth century and a tearoom took over to serve hikers. Indeed part of the bath still remains unused and the spring water gurgles.

There were also reports of goblins seen around White Wells. In 1878 one summer's morning William Butterworth, caretaker of the spring baths, attempted to open the building but found his key revolving in a circle and the door wedged shut. Some force was holding him back from entry.

Eventually ramming his way in he was stunned to find a number of beings under 2 feet tall and clad in green, frolicking in the water.

A sound like a million bees buzzing at once filled the room. Upon hearing his exclamation the entities scurried away out of sight behind rocks.