An explanation, based on the current thinking of Lemaitre plus other venerable scientists, for the expanding universe can be found in the  section What is Heaven.

The Parable of the Golden Carp 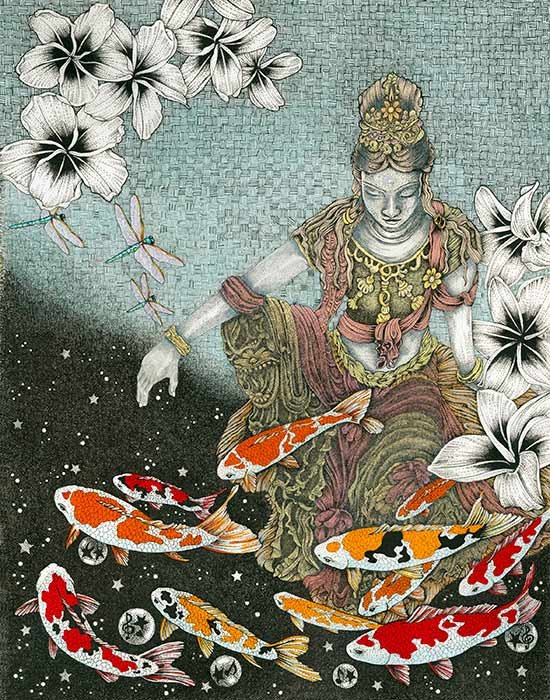 There was once a beautiful pond, tended by the Pondkeeper who sat admiring the fishes with which he had stocked it.

The rim was full of fish of all shapes and sizes that he had carefully reared and placed in the pond for his enjoyment.

One day he noticed that one of his favourites, a beautiful blue and gold carp, was sick.  He had only recently put some parasites on the carp as an experiment.  He had bred the parasites to look after and steward the carp and all the other creatures that lived on the carp, keeping it clean, helping it to feed and digest food.

The Pondkeeper looked carefully and realised the carp was very sick and might even by dying.  The Carp was swarming with parasites and a quarter of the original helpers on the carp had gone.  Some of its scales were black, it had huge holes in its sides where they had burrowed down and were extracting its flesh.  It was bare where before it had had magnificent forests of whiskers.

There was no time to lose.  He got out his line and threw it out to the carp.  The carp realising it was a life line put the hook in its mouth and waited to be reeled in to the Pondkeeper.

The parasites on the carp were amazed as the rim seemed to move away from them and all the other fish started to go further and further away.  They decided the pond must be expanding and carried on as before.

And the Pondkeeper got out his lice powder.