Many myths tales and legends use allegorical descriptions to describe the heros/co-creator’s path.  Often it involves sea journeys and treks across the desert [or both].  A remarkable number of visions during this period do involve the sea and water or at least rivers and floods and so on as well as deserts.  Occasionally a person will undertake a journey in the air in the form of a migrating bird, there will then be numerous dreams about birds and flying.

In order to see this better we need to go back to the diagram of the Egg.  Those on the heroes path or the co-creation path go round the egg to get to the Creator and Created section.  They do not go ‘up’ their soul cone, like the Mystic, merging at the centre, they travel round the Egg.  Note that this is both a figurative journey and if executed in dreams and visions takes on a literal quality too. 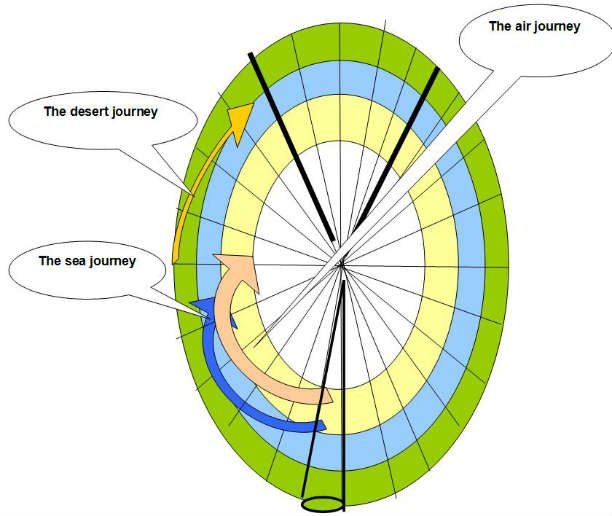 When travelling by ‘water’, the person undertaking this journey usually finds he has dreams or visions which involve boats.  There may also be strange dreams and visions related to the fact the water level is above the earth level.

The Odyssey is an allegorical journey of a hero figure (Odysseus – Greek,  Ulysses - Roman)  on his heroes path. He too undertakes the journey by sea.   Le Petit Prince by Antoine de Saint-Exupéry is an allegory of the spiritual journey which takes place in the desert and the air.  Jonathan Livingstone Seagull takes his journey entirely in the air…..

Although I have shown the journey as though it was taken at one level, it is clear from a number of observations that although one can do this [symbolically of course],  there are many who also aim to get ‘higher’ as they travel going from water, to air and then up to the aether level – so that their final resting place is where they prefer to be.  If you prefer your final resting place to be on an island at sea level, you stay at sea level and travel along this way, but if you wish to aim higher you ‘climb’ ascending – as you go by more heroic deeds and more acts of co-creation. 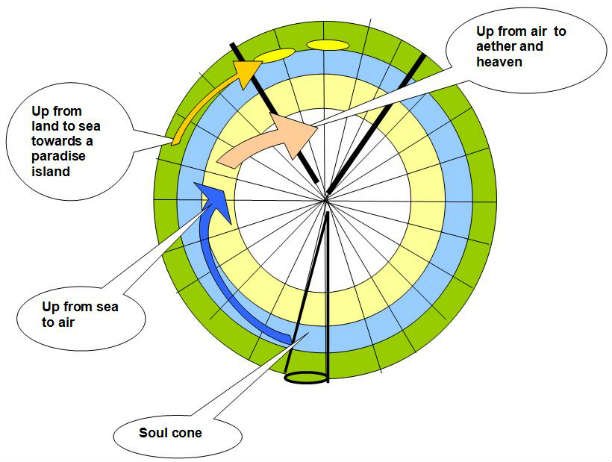 In the Odyssey, the poem describes Odysseus’s long journey home following the fall of Troy. It takes Odysseus ten years to reach Ithaca after the ten-year Trojan War, twenty years in total.

The enormous time span involved serves to emphasise that it is the journey itself that is important not the arrival.  During the journey he endures a huge number of tests as well as dangers.  The process itself, in other words, is more important than the continual drive to get to the end.   Paulo Coehlo’s Alchemist also very clearly explains this. [I won’t quote from the book, it is better to read the entire book to understand the idea].

Practically every ‘hero’ story is in effect an allegory of a person going along this route.  Not all of them get it right, which makes the stories that much more useful.