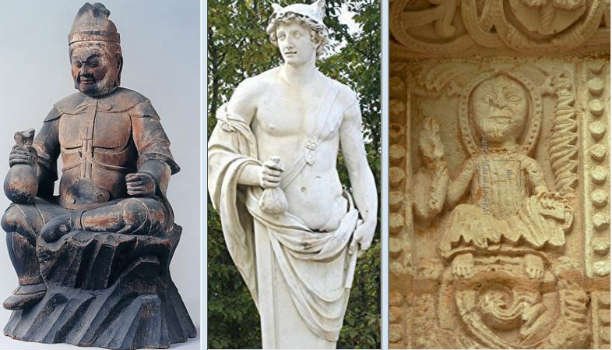 At its most simple symbolically, a purse represents a container of treasures and especially coins.  It is thus not dissimilar in symbolism to the box or casket, coffer, bag or rucksack.

In some symbol systems, it simply means the body – in the same way that it is used in the symbolism for Feet and shoes. The leather purse is then simply a holder for the soul, a symbolism not at odds with that above.

But at one time the purse or pouch was a badge of office and had much deeper spiritual meaning.  Its connection was to the Mysteries.

A very large number of Greek gods, as well as early figures from the Mysteries carry pouches or purses. The Fool on the Tarot card carries a purse on a stick – a knapsack. Many Eastern religious figures are seen with purses and pouches and they are all entirely symbolic in this context. The ancient Greek word kibisis, was used to describe the sack carried by the god Hermes. There is thus more than one meaning for a purse, pouch or sack.  This sack also held treasures in a sense, at least I would think of them as treasures.  Here is what J E Cirlot says:

“An attribute of satyrs and of Silenius. In Greek, the phrase to untie the wine-skin meant to indulge in Venusian delights”

Venus was the Roman goddess of love, beauty, sex, fertility and prosperity.

So what all this is saying is that the pouch or purse is symbolically the scrotum - “ a pouch of skin containing the testicles”.

If you keep the pouch away from you, the implication is that you have achieved your powers as a god by means other than sexual stimulation or peaking.  This is the knapsack of the Fool.  The Fool practises chastity preferring instead love with visualisation. 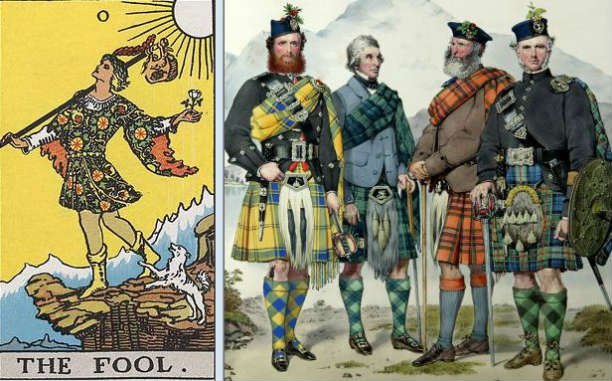 If you are holding the purse or it is placed over your body – like the sporran, the implication is that all your powers were derived through this method.

By extension in those systems that practise sexual stimulation techniques it can also mean the vagina instead of the scrotum and balls.

It is worth adding that where sexual stimulation techniques were being used, a purse like object was occasionally carried by those who helped Initiates with the process.  This is not technically speaking a purse but a mallet!  It is used in the process.  The English expression 'hitting the sack' is unconnected with this practise you will be relieved to know, it may on the contrary apply to the Scots, however, who are in another league [sorry I'm joking - or maybe I'm not].