This stelae stands on the southern side of the Great Hieroglyphic Court.  It has a magician on both sides, but the figures are very similar the main difference being in the pectorals, the aprons and the arrangements of the headdress, which rather indicates this is a stelae depicting the 'before' and 'after' states of adepts being initiated here.

Both figures wear enormous ornate ear ornaments, and their headresses are very complex, as one would expect for a magician.  They wear leather sandals indicating they are not spirits but human - humans wear shoes, bare feet are used to indicate gods.  It is dated AD 764.

To the South of the Court rises Temple 11 regarded as one of the complexes most sacred temples.  It was rebuilt for the last time during the reign of Yax Pac, which means First Dawn [see concepts] in the 16th century. 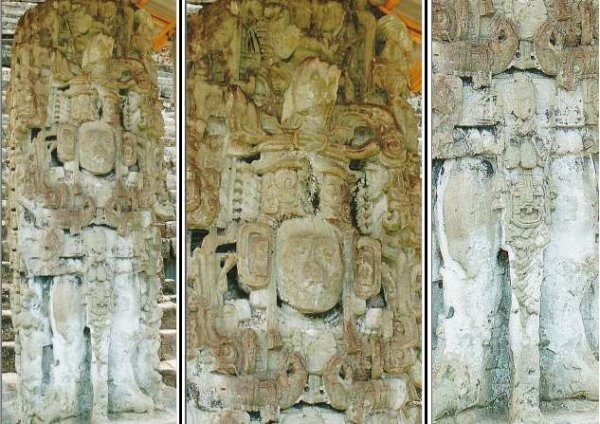