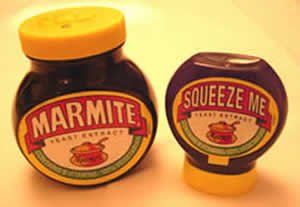 Marmite is the brand name for two similar food spreads: the original British version, since 2000 a Unilever product; and a modified version produced in New Zealand by Sanitarium Health Food Company and distributed in Australasia and the Pacific. Marmite is made from yeast extract, a by-product of beer brewing. Other similar products include the Australian Vegemite, the Swiss Cenovis and the German Vitam-R.

The British version of the product is a sticky, dark brown food paste with a distinctive, powerful savoury flavour, which is extremely salty. This distinctive taste is reflected in the British company's marketing slogan: "Love it or hate it."

A version with a different flavour has been manufactured in New Zealand since 1919. This is the only product sold as Marmite in Australasia and the Pacific, whereas elsewhere in the world the British version predominates.

The image on the front of the British jar shows a "marmite" a French term for a large, covered earthenware or metal cooking pot. British Marmite was originally supplied in earthenware pots, but since the 1920s has been sold in glass jars of approximately the same shape. A thinner version in squeezable plastic jars was introduced in March 2006.

Nutritionally, in the 1930s, Marmite was used by the English scientist Lucy Wills to identify folic acid and its effect in suppressing anaemia. Besides folic acid Marmite has useful quantities of several other vitamins, even in small servings. The sodium content of the spread is high and has 'caused concern', although it is the amount per serving rather than the percentage in bulk Marmite that is relevant. The main ingredient of Marmite is yeast extract, which contains a high concentration of glutamic acid. The niacin content is also high and contributes to its cholesterol lowering properties.  The following table comes from Wikipedia.

You can use it to flavour stocks and provide an alternative vegetarian base to meals, but personally I think it is best on hot buttered wholegrain toast, with maybe a boiled egg or two to go with it for breakfast.  A food of the gods!

Each of the vitamins and minerals in it helps to contribute to its health giving effects.

An acquired taste, but worth acquiring.