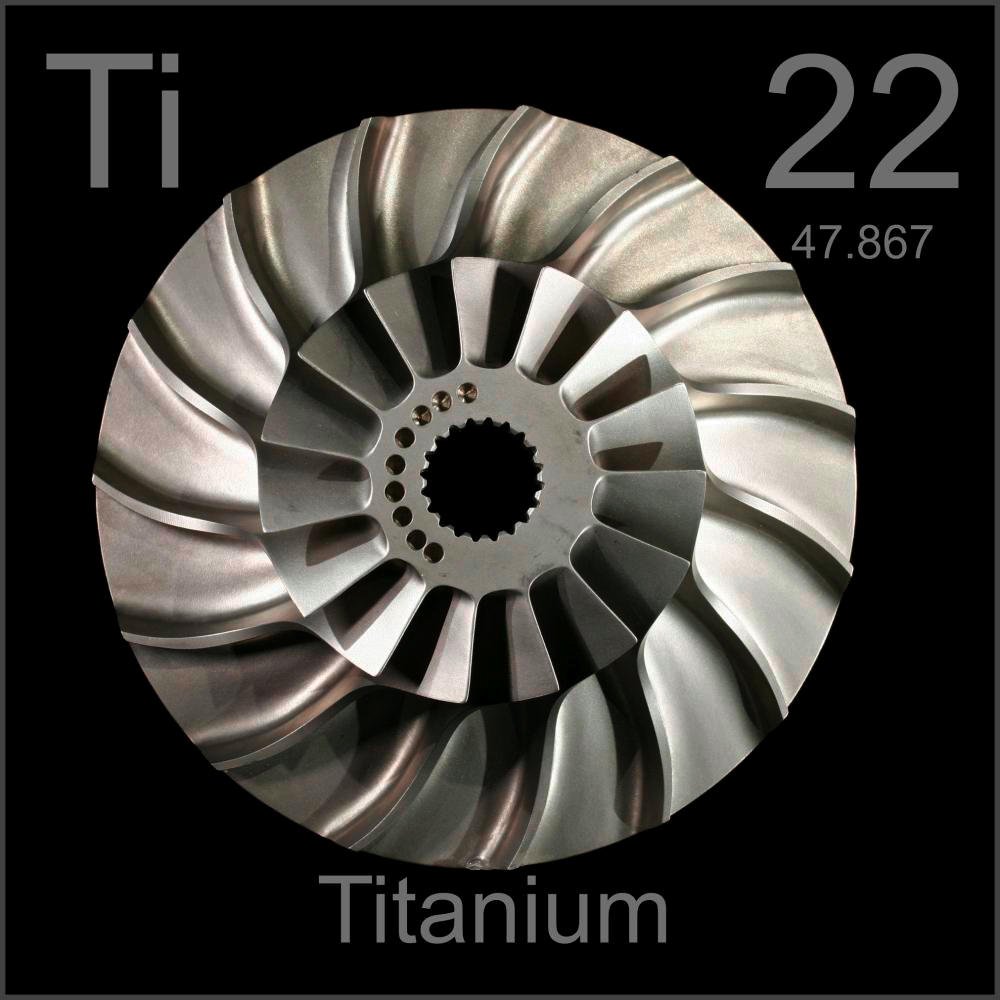 Titanium is a chemical element with symbol Ti and atomic number 22. Titanium was discovered in Cornwall, Great Britain, by William Gregor in 1791 and named by Martin Heinrich Klaproth for the Titans of Greek mythology.

Titanium is the ninth-most abundant element in Earth's crust (0.63% by mass) and the seventh-most abundant metal. It is present as oxides in most igneous rocks, in sediments derived from them, and natural bodies of water. The concentration of Ti is about 4 picomolar in the ocean.

Of the 801 types of igneous rocks analyzed by the United States Geological Survey, 784 contained titanium. Its proportion in soils is approximately 0.5 to 1.5%.  The element occurs within a number of mineral deposits, principally rutile and ilmenite. 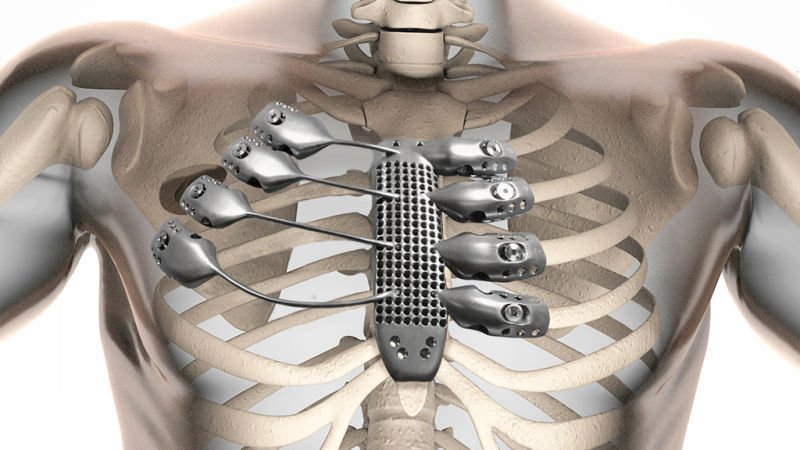 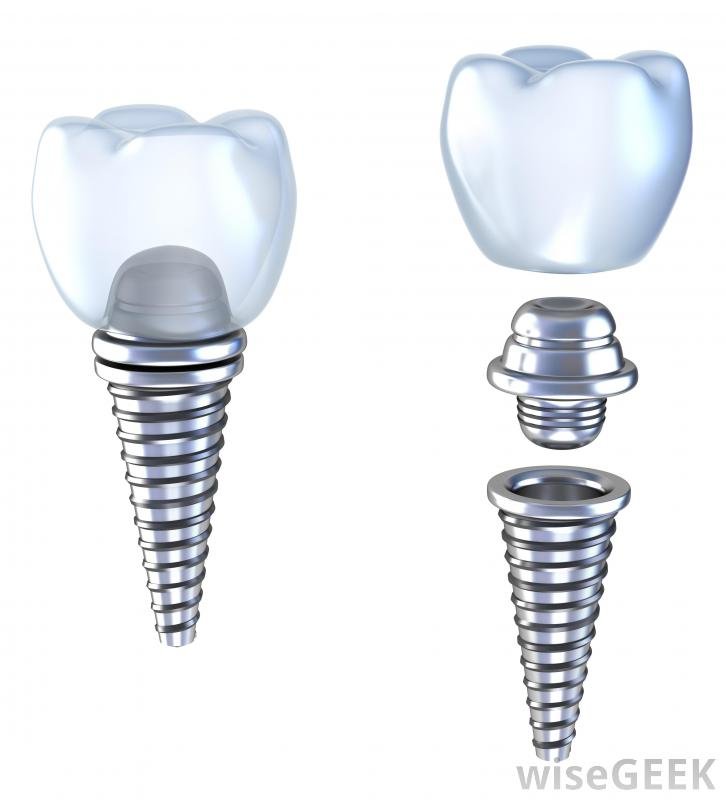 The two most useful properties of Titanium are corrosion resistance and the highest strength-to-weight ratio of any metallic element.

In its unalloyed condition, titanium is as strong as some steels, but less dense.  It is quite ductile (especially in an oxygen-free environment), lustrous, and metallic-white in colour. It has a relatively high melting point (more than 1,650 °C or 3,000 °F).

Titanium is  non-magnetic and a poor conductor of heat and electricity.

Titanium is highly resistant to corrosion in sea water, aqua regia, and chlorine. It is capable of withstanding attack by dilute sulfuric and hydrochloric acids, chloride solutions, and most organic acids. However, titanium is corroded by concentrated acids. 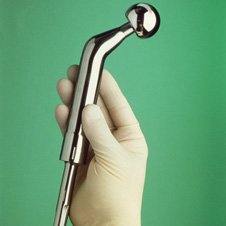 Uses are as follows:

Alloys used in manufacturing - Titanium can be alloyed with iron, aluminium, vanadium, and molybdenum, among other elements, to produce strong, lightweight alloys.  These alloys have found a multitude of uses in equipment used in the following industries 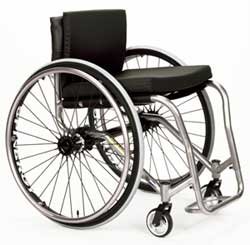 Alloys used in medicine and dentistry – Again, because Titanium alloys are strong and lightweight, they have found a multitude of uses in equipment used for medicine or dentistry and in implants: 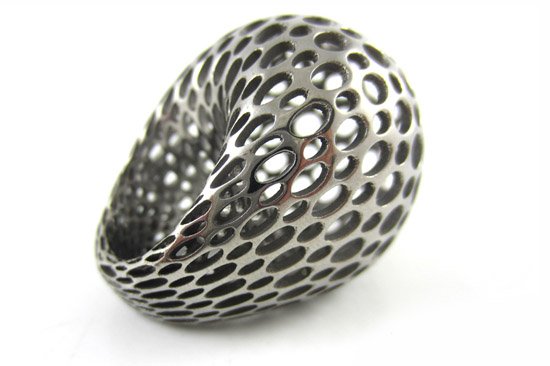 There is conflicting evidence about the role of Titanium, with some sources stating there is no evidence for any biological role for Titanium, but others indicating there may be.

A very useful study -Bioinorganic Chemistry of Titanium by Katherine M. Buettner and Dr Ann M. Valentine explores this area in more detail for those who are interested.

“When we consider which inorganic elements Nature has selected through evolution, we generally find that Nature employs elements that both facilitate useful chemistry and are sufficiently abundant and sufficiently bioavailable for organisms to benefit from their exploitation.  Given these selection criteria, it would be surprising if Titanium were not a biological element”

Suffice to say that Titanium is found in almost all living things, plants, animals and even human beings.

According to the analysis on Dr Duke’s Phytochemical database, Titanium occurs naturally in foods like Onion, Asparagus, Beetroot, Chinese cabbage, Carrots, Cinnamon, Chicory, Grapefruit and Oranges, Soy beans, Apples, Parsley, Nettles, Grapes and Sweetcorn, as such I think we can conclude that Titanium in the quantities Nature intended is not a toxin.

But what has emerged which is far more important is that there are certain compounds that are toxic.  Titanium dioxide, in particular is starting to cause concern, especially when used as nanoparticles.  We have a description for Titanium dioxide in the illnesses/overload section.

Most of the Ti in the environment is present in the Ti(IV) oxidation state in common mineral forms, notably in rutile (one of several crystal forms of TiO2) and ilmenite (FeTiO3).
The weathering rate of Ti is very slow, and it is considered an immobile element in weathering rate studies.  Some studies do suggest, however, that Ti can be mobile in soils.  One process that may enable this mobility is dissolution of minerals by both organic and inorganic acids.

A study in the Mediterranean Sea found that a large fraction of the Ti was not released by treatment with acid, but instead was released upon UV irradiation.  The presence of silicon or silica appears to increase the level at which Titanium is absorbed by living things.

Titanium solubility is enhanced in some natural waters, including alkaline fluoride- and carbonate-containing waters. Oxalic acid and citric acid notably increase the solubility of Ti from mineral sources.

Titanium has never been demonstrated to be essential for any organism, nor to occur natively in any metalloenzyme. However, the essentiality of Ti for organism(s) would be quite easy to miss.

The use of Titanium by bacteria has not yet been fully explored, however, one text alludes to an unpublished observation of biomineralization of amorphous ilmenite (FeTiO3) by an undetermined bacterial species [Lowenstam, H. A.; Weiner, S. On Biomineralization; Oxford University Press: New York, 1989].

There may even be a connection with phages.  Bioabsorption of nanoparticulate TiO2 has been recorded by Pseudonomas aeruginosa and E. coli. with an hypothesis that this may occur more broadly.
The use may be even simpler, as there are some bacteria that appear to use Titanium dioxide as a ‘safe home’.  In one experiment, an isolated Gram positive species – Rhodococcus ruber – not only adhered selectively to TiO2 over other metal oxides, but managed to continue to adhere when challenged with dilute acids, alcohols, and various detergents.  This opens up intriguing possibilities, as both the skin and the intestine have a very diverse bacterial flora which is battered constantly by acids, alkalis and other substances, as such the presence of any TiO2 may help the intestinal bacteria to remain in the gut.  Pathogenically, it may also supply a carrier on which bacteria may ride into the body.

Titanium has never been demonstrated to occur natively in any metalloenzyme.  More recent work using modern mass spectrometry, however, has begun to identify Ti in some metalloproteomes, and high Ti levels in some cells were detected.  The proteome is the entire set of proteins expressed by a genome, cell, tissue, or organism at a certain time. The term is a blend of proteins and genome.  Given the diversity of the metalloproteome, virtually all amino acid residues have been shown to bind metal centers.  Metalloprotein is a generic term for a protein that contains a metal ion cofactor. A large number of all proteins are part of this category.

Between 10 and 20 mg are found in the body of the Standard Man, making Ti the 14th most abundant element there, more common than cobalt, an essential element required by vitamin B12. Titanium is not invariably detected in newborns, but in adults it is concentrated in the lung, liver, spleen, and kidney.  Its concentration has been reported as 116.7 ppb (∼2 μM) in human blood serum and 250 ppb (∼5 μM) in milk.  If it were required, titanium is so abundant that an organism would be unlikely to experience a dietary deficiency. Americans consume on the order of 300 μg/day. Even patients receiving sustenance through total parenteral nutrition (TPN) are exposed to relatively high amounts of Ti (up to 200 μg/day).

BUT, there is the possibility that a person could overdose, thus the danger is not deficiency but overdose.  Large amounts of Ti occur in processed foods, which are consumed in increasing amounts in developed countries. Small children, who tend to put nonfood items in their mouths, may ingest quite high concentrations, on the order of 1_10 mg/day

Mussels bioaccumulate Ti when exposed to high levels through industrial pollution, and these organisms may serve as pollution indicators.

In contrast, a number of sea creatures appear to be both able to handle large quantities of Titanium, but also be key in the way Titanium is circulated and managed in the environment. Diatoms, for example, are capable of taking up Ti to levels of 940 ppm in the whole organism. In natural samples, Ti occurs at up to 1254 ppm in the acid-resistant siliceous frustules of diatoms. This phenomenon may explain why dissolved Ti is depleted along with silicon during a spring diatom bloom and may contribute to the surface-depleted profile of Ti in the ocean, when such a profile is observed. It could be due to simple precipitation of Ti onto the siliceous frustule. Alternatively, the incorporation of Ti could be facilitated by biomolecules in the organism. The enzymes directing biomineralization of silica in diatoms are called silaffins.

Though most sponges have Ti levels below 100 ppm,  several species collected from the coast of Madeira exhibited Ti levels above 1 500 ppm, with one species, Ircinia fascicularia, having 3 500 ppm. The authors of the paper from which these figures derive, suggested that high Ti content of the basic basalt lava coast was responsible, although other species collected from the same area had levels as low as 117 ppm. Silicatein, the enzyme responsible for silica biomineralization in the sponge, also directs the mineralization of Ti dioxide from a soluble Ti(IV) precursor

The hornet Vespa orientalis attaches a grain of a Ti-containing mineral, possibly ilmenite, in each cell of its honeycomb-shaped nest. It is unclear what function it might serve.

Titanium does not affect the growth rate of yeast, but yeast does absorb it at up to 1500 to 2000 ppm dry weight.