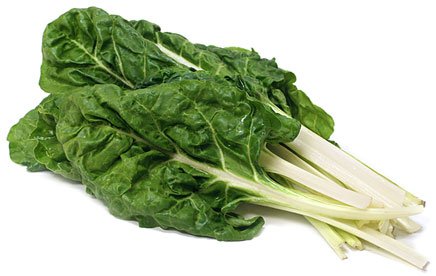 Beta vulgaris L. subsp. cicla (L.) W.D.J. Koch commonly known as chard or Swiss chard, occasionally as Silverbeet, Ruby Chard,  Leaf Beet or Seakale Beet, is a leafy green vegetable that is part of the Beet genus.  It belongs to the Chenopodiaceae family.

The naming is indeed very confusing.  The Beta L  genus describes the Beets in general, Beta vulgaris L, the common beets, a species that includes beetroot, sugar beet, perpetual spinach and a host of apparently unrelated vegetables.  As you can see it also includes beets whose roots are used – like beetroot – and beets whose leaves are used – like perpetual spinach and chard.  It is only when one is down to the subspecies - Beta vulgaris L. ssp. cicla (L.) W.D.J. Koch – that one has found Swiss chard. It may also be known as Beta cicla (L.) L. and Beta vulgaris L. var. cicla L.

Chard was first described in 1753 by Linnaeus as Beta vulgaris var. cicla, which would seem a more sensible name.  All beet cultivars are descendants of the sea beet, Beta vulgaris subsp. maritima. 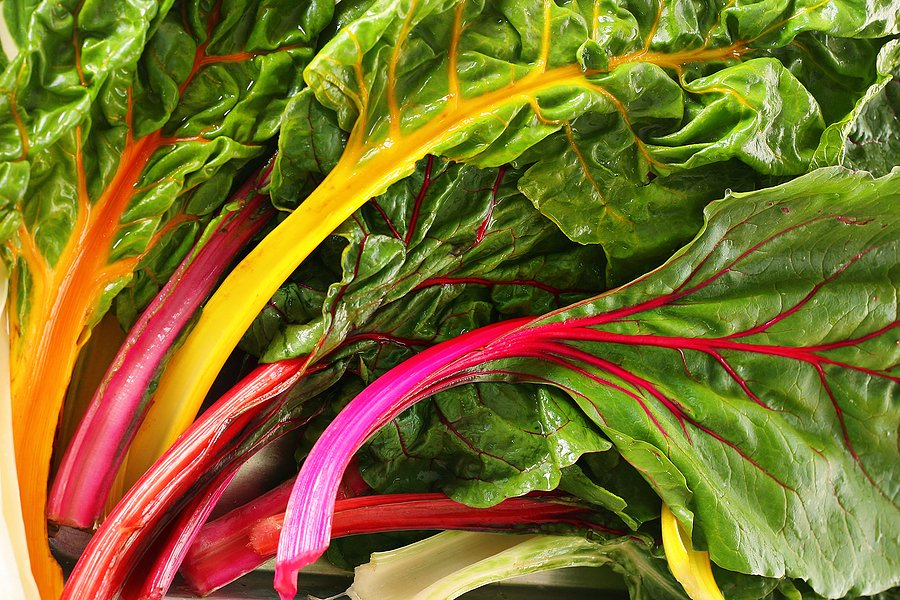 Swiss chard isn't native to Switzerland, but the Swiss botanist Koch determined the scientific name of this plant in the 19th century and since then, its name has honoured his homeland. The actual homeland of chard lies further south, in the Mediterranean region.  The Greek philosopher, Aristotle wrote about chard in the fourth century B.C.

It is now cultivated all over the world, but the French, Italians and Spanish are great users of Swiss chard and it is the subject of much research in Spain and Italy, where the growing conditions and differing nutrient values under various growing conditions are being studied.  In the UK, it is grown on allotments, only recently has it appeared in the supermarkets, and mostly via the online delivery supermarkets, because it is very difficult to keep fresh once picked.  Like spinach, it wilts once picked. 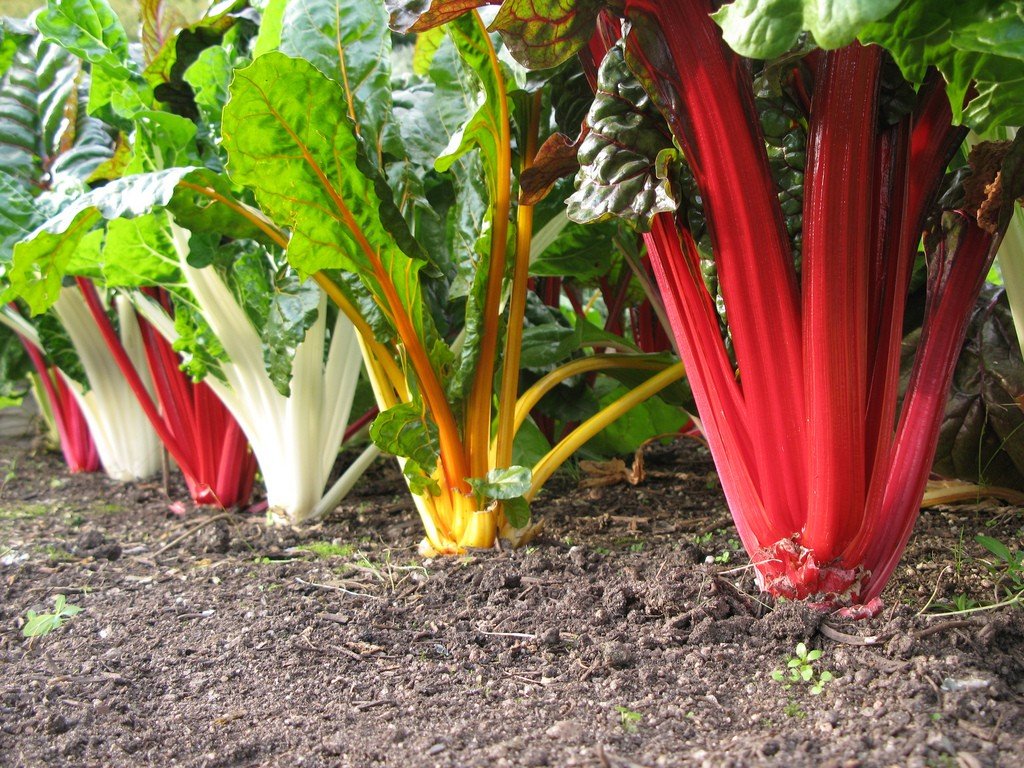 Although Swiss chard is technically a beet, in the same family as beetroots and sugar beet, it is the leaves that are eaten.  The leaf has a white or coloured rib and then a deep green leaf.  The rib and leaf are separated and cooked separately as the cooking times are slightly different.  This said, they can be combined after cooking and you get two vegetables for the price of one.

There are a number of different varieties: 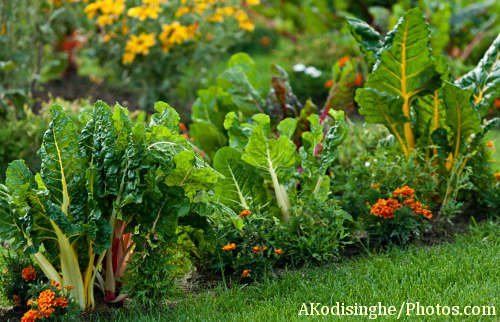 Chard is a biennial. The coloured stem varieties, such as Bright Lights, can look attractive enough to be planted in a flower border. They also grow readily in containers. The plants will produce for well over a year, so need a good supply of compost, manure or a general purpose fertiliser, such as Growmore or Blood, Fish & Bone. 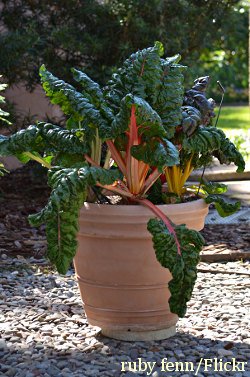 Sow thinly in April, directly into good soil, preferably manured the previous winter. A row of around 2 m (6 feet) should be sufficient for the average family, producing some 2Kg over the year. Once the seedlings are large enough to handle, thin to one plant per 20–30 cm (8–12 inches). Keep weed-free and water in dry weather.

Slugs like to eat seedlings and small plants, but are much less of a threat once the Chard has developed.

Chard can be harvested while the leaves are young and tender, or after maturity when they are larger and have longer stems. Although the commercial growers tend to pull up the entire plant, those of us with vegetable gardens or allotments simply go down and – using a sharp knife – simply slice off  the stems and leaves we want for lunch.  If you only take one or two leaves from each plant, then you don’t exhaust the plant and you can have a continuous supply of leaves for months and months.   If you supply it with plenty of manure, it can also be encouraged to last longer than two years, although it does have a tendency to want to run to seed after the two years are up. 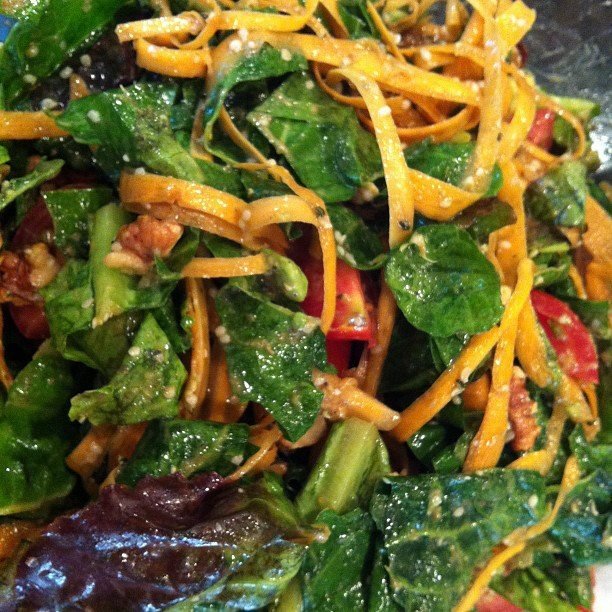 The ancient Greeks, and later the Romans, prized chard for its medicinal properties. Although the vegetable is widely recognised as being nutritionally good with an abundance of minerals and vitamins, the medicinal properties are on the whole not as well examined.  Dr Duke’s analysis is for the family of beets, thus although they share a number of phytochemicals one cannot expect the properties to be identical.  We have provided the analysis for reference.

The combination of traditional nutrients, phytonutrients (particularly anthocyans), plus fibre has meant it has been the subject of study for intestinal complaints, notably digestive tract cancers. Several research studies on chard have focused specifically on colon cancer, the observations provide more details. Preliminary animal research has also indicated that Swiss chard may confer a protective effect on the kidneys of those with diabetes through reducing serum urea and creatinine levels, again the research paper abstracts are provided as observations.

But there is a dark spot on the horizon.  Swiss chard is an excellent chelator.  And in particular it can chelate cadmium extremely well. It is especially good in saline [salty] soils].  One can look at this positively, swiss chard is thus a potentially valuable bioremedial plant in times of climate change and high flooding; but you would be very unwise to eat the plant afterwards!  Make sure any swiss chard you buy comes form a cadmium free farm, or grow your own.

Crops, particularly in the Northeast region of Mexico, have to cope with increasing soil salinization due to irrigation. Chloride (Cl(-)) concentration has been strongly related to enhance cadmium (Cd) uptake by plants due to increased solubility in the soil solution. The effect of irrigation with slightly saline water from a local well was evaluated … on the accumulation and translocation of Cd in Swiss chard (Beta vulgaris L.) …Results showed that Cl(-) salinity in the WW effectively mobilized soil Cd and increased its phytoavailability. A higher level of Cd was found in roots (46.41 mg kg(-1)) compared to shoots (10.75 mg kg(-1)). PMID:  24453013

The analyses we have seen seem to vary somewhat in the content they attribute to the plant, however, this is not unusual as it depends to a large extent on the soil in which they were grown.  One analysis found “high concentrations of vitamin K, vitamin A, vitamin C, magnesium, manganese, potassium, iron, vitamin E, and dietary fiber. Swiss chard also emerges as a very good or good source of copper, calcium, vitamin B2, vitamin B6, protein, phosphorus, vitamin B1, zinc, folate, biotin, niacin and pantothenic acid”.

According to the USDA Nutrients database the nutrients are as follows: 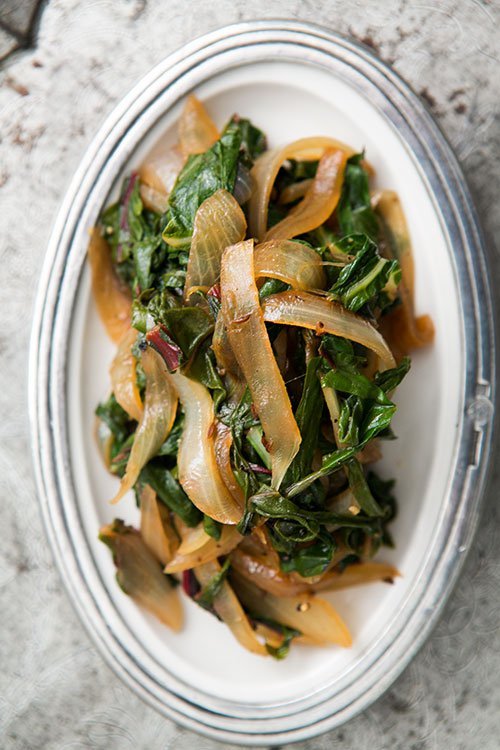 There is one essential ingredient of which one should be aware and that is oxalic acid.  Rhubarb contains oxalic acid and it is this that gives it its sharp taste.  It is not a good idea to eat too much oxalic acid.  The following seemed quite sensible advice

“Do not cook chard in an aluminium pot since the oxalates contained in the chard will react with the metal and cause the pot to discolour. .. Chard is one of the vegetables that benefits from quick boiling (as opposed to steaming or healthy sauté) since this helps to free the oxalic acids it contains and makes the chard less bitter and more sweet. “

and just to finish on a positive note, swiss chard is being used in the space programme

Salad greens will be among the first crops grown on lunar or planetary space stations. Swiss chard (Beta vulgaris L.) is an important candidate salad crop because it is high yielding and rich in vitamins and minerals. Five Swiss chard cultivars were grown in the greenhouse under two light levels for 13 weeks to compare cumulative yields from weekly harvests, mineral composition, and to evaluate sensory attributes as a salad green. The varieties Large White Ribbed (LWR) and Lucullus (LUC) were the highest yielding in both light regimes. LWR was the shortest of the cultivars requiring the least vertical space. LWR also received the highest sensory ratings of the five cultivars. LWR Swiss chard should be considered as an initial test variety in food production modules.  PMID: 12481809 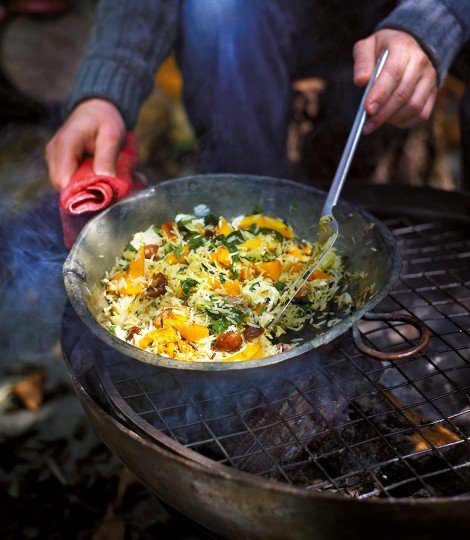 Swiss chard is able to be married with some quite robust flavours – anchovies, garlic, chili, and capers.  The steamed midribs, for example, can be served with ‘brown butter’, capers and toasted almonds.   If you separate leaf from midrib, it can be stir fried very successfully, as long as you start with the sliced midrib and then add the chopped leaves last.

When the leaves are very young they can be eaten raw in salads with a dressing like aioli [garlic mayonnaise] and crispy bacon scattered on the top.  The Lebanese cook it and serve it with a tahini sauce and sprinkle it with chopped mint.  The Italians use the leaf as an alternative to spinach.  The Greeks use the leaf as an alternative to vine leaves, keeping the leaf whole, lightly blanching it to soften it and then stuffing it with rice, minced lamb, pine nuts, mint, onions and raisins.

John Evelyn, author of Acetaria used to cook the leaves in their own juices and serve them on heavily buttered toast topped with a lightly poached egg.

They key to success is to remember that in Swiss chard you have two vegetables in one.  They need to be separated.  The green leafy part can be cut from the midrib using scissors, and then snipped into small pieces.  The midribs can either be sliced lengthwise or diagonally.  The leaves of Swiss chard are much heftier than spinach and don’t collapse the way spinach does.  If you put them in salted boiling water, they still only need about 2 minutes, however, and need to be drained thoroughly.  The midribs can be steamed.

The midribs, painted with olive oil can be chargrilled and served with parmesan.  The leaves can be sauted and sprinkled with pine nuts and raisins, and the two served for lunch with crusty bread or used as an accompaniment to grilled meat or fried halloumi. 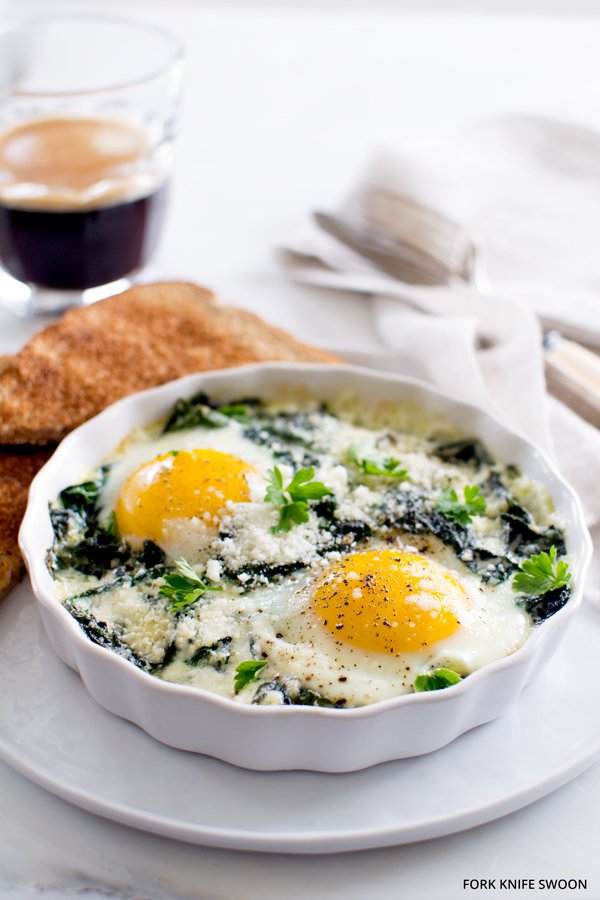 The quantities depend somewhat on your taste and the amount you have from the garden.  The chopped chard leaves and stem are mixed with grated courgette, crushed garlic, chopped lightly sauted onion, cooked rice and grated gruyere cheese. To this are added two beaten eggs and placed in a casserole, then baked with more gruyere and Parmesan scattered on top. It is nice with sliced fresh, peeled tomatoes, with olive oil and chopped herbs.

The chili powder can be replaced by Dijon mustard or left out completely.  Quantities are somewhat up to you depending on how oniony or chardy or eggy you would like the dish!

Adapted from a recipe in Yotam Ottolenghi’s Plenty.  The breadcrumbs can be replaced by ground almonds with a dash of cornflour , if you are on a gluten free diet. They can also be grilled 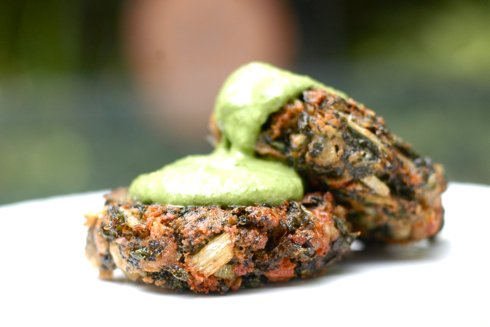 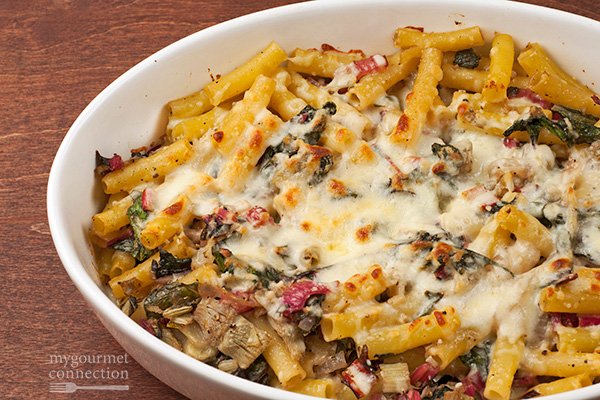 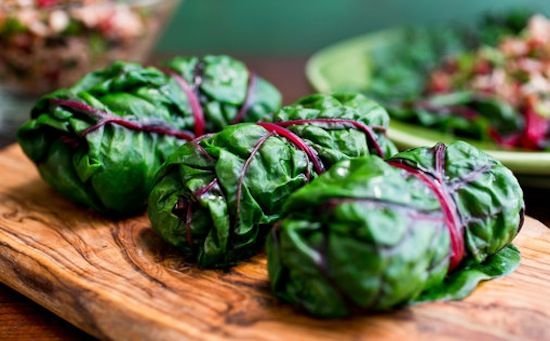 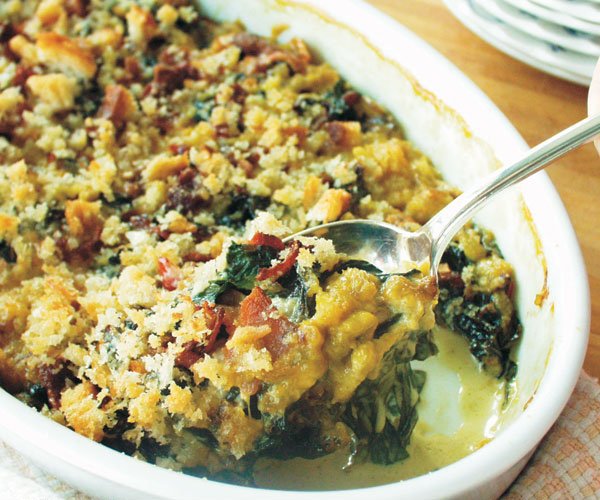 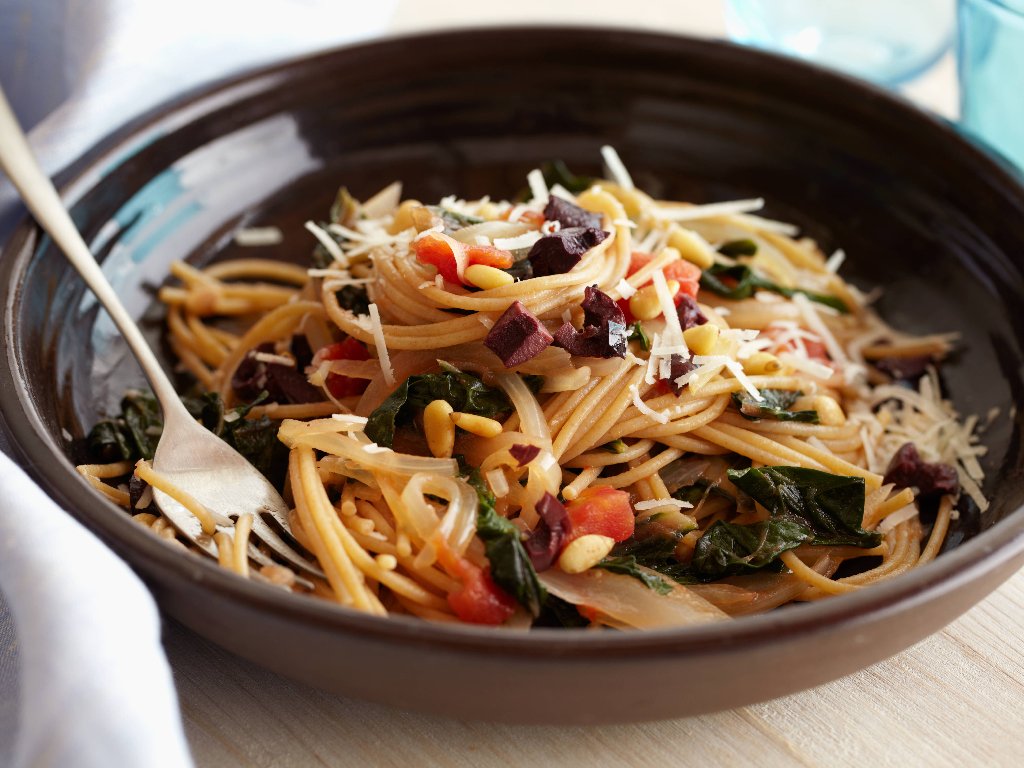