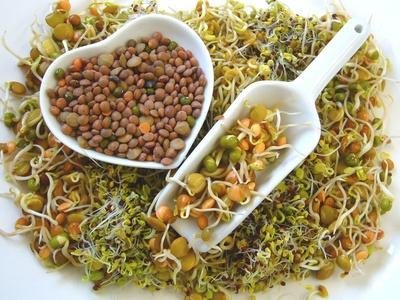 Beans, grains and so on, are in essence all seeds and if you soak them in sterilised water, they will sprout.

Not all sprouted seeds are good for you or even edible, but sprouting in some cases produces a different food product, where the starches become sugars and where minerals and other vitamins are released or produced. Thus a sprouted seed is a type of food all in its own right.

We are perhaps most familiar with the sprouted mung bean used in Chinese cooking – the bean sprout – and supermarkets have also begun to stock alfalfa sprouted seeds for salads, but it is important that we don't overlook one of the oldest form of sprouted seed used in foods and that is the sprouting of grains to produce malt. 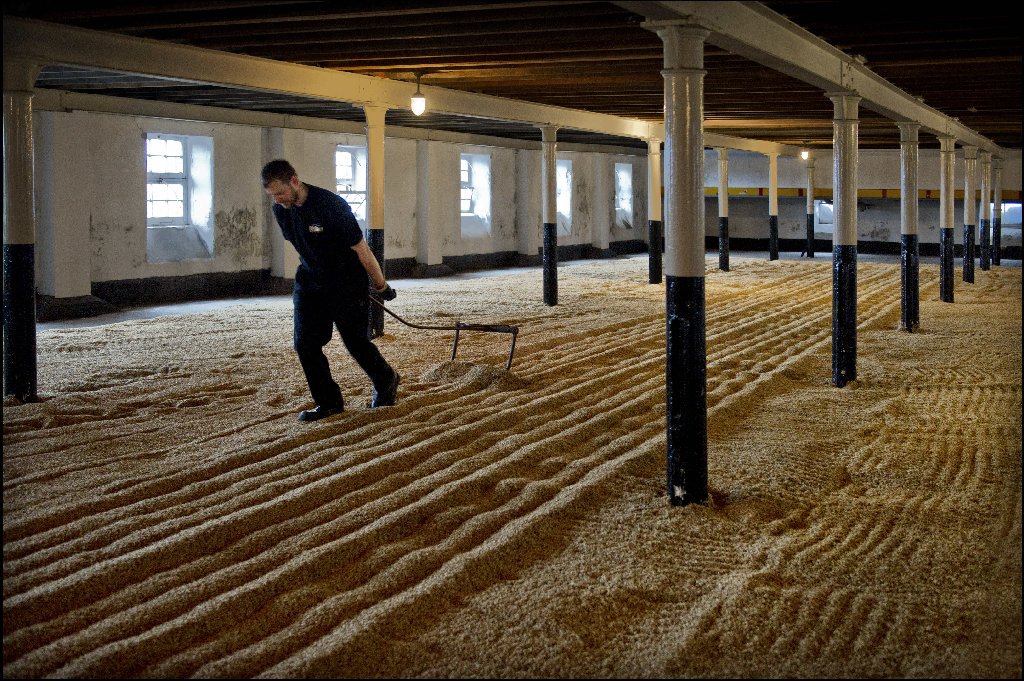 Malt is germinated cereal grains that have been dried in a process known as "malting". The grains are made to germinate by soaking in water, and are then halted from germinating further by drying with hot air.

Malting grains develop the enzymes required to modify the grain's starches into sugars. It also develops other enzymes, such as proteases, which break down the proteins in the grain into forms that can be used by yeast. Malt also contains small amounts of other sugars, such as sucrose and fructose, which are not products of starch modification but were already in the grain.

It should not be forgotten that malted grain is used to make beer, whisky, malted shakes, malt vinegar, confections such as Maltesers , drinks such as Horlicks, Ovaltine and Milo, and some baked goods, such as fruit malt loaf.

The negatives of sprouted seeds 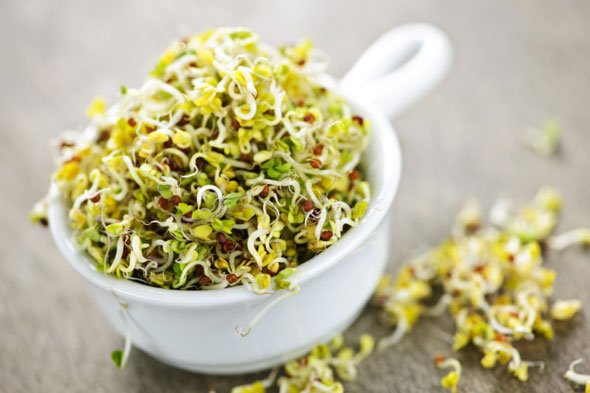 Although there is great enthusiasm for the benefits of sprouted seeds, we need to look at this objectively.  A plant prolongs its existence using seed and thus it is quite likely to provide protective mechanisms in the seed once it has sprouted.

Before this has happened, it may encourage animals and birds to eat the fruit or seeds in order to start the process of growth going and to move the seed elsewhere - thus ensuring no competition from its progeny.   But once it has started to sprout, there may be additional chemical changes that take place that protect the 'sproutling'.

Kidney beans and millet, for example, are protected by cyanide once they have sprouted.  In the following, an autoclave is a pressure chamber used to sterilize equipment and supplies by subjecting them to high pressure saturated steam:

Cyanide contents of locally purchased brown finger millet (Eleusine corocana L. Gaertner) and brown speckled kidney bean seeds (Phaseolus vulgaries var. Rose Coco) were determined using raw, germinated and autoclaved samples. The aim was to establish the extent of cyanide content increase resulting from the germination process and the effectiveness of the autoclaving process on the reduction of cyanide levels in the samples, for safety considerations. Autoclaving was carried out at 121 degree C for 20 minutes. It was found that germination increased the cyanide content by 2.11 to 2.14 fold in finger millet for laboratory processed samples. In the case of kidney beans the increment was 1.76 to 1.77 fold for laboratory samples. The increments for field processed samples were in the same range as those for laboratory samples.
Autoclaving reduced the cyanide content to between 61.8 and 65.9 % of the original raw contents for finger millet and between 56.6 to 57.8% in the case of kidney beans. The corresponding reductions for field samples were also found to be within the same ranges as the laboratory processed samples. It was concluded that autoclaving significantly reduced the cyanide levels in germinated finger millet and kidney beans.  PMID:  24409633 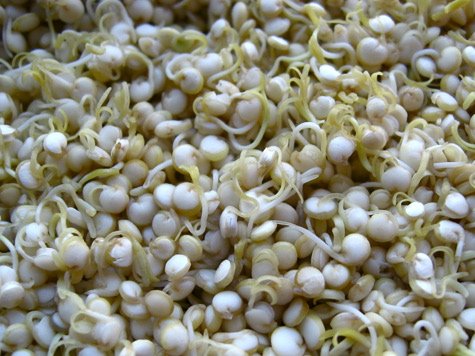 reduced it but didn't remove it.

The other strategy that plants appear to have for protecting their young is to develop a symbiotic relationship with bacteria.

One of these bacteria is the E coli bacteria and there have been a host of outbreaks of food poisoning caused by this bacteria, attributed to the manufacturers, but actually a feature of the plant's own protective mechanism:

The majority of the seed sprout-related outbreaks have been associated with Escherichia coli O157:H7 and Salmonella. Therefore, an effective method is needed to inactivate these organisms on the seeds before they are sprouted.
This study was conducted to assess the effectiveness of various hot water treatments to inactivate E. coli O157:H7 and Salmonella populations on mung beans seeds intended for sprout production and to determine the effect of these treatments on seed germination after the seeds were dipped in chilled water for 30 s.
Mung bean seed inoculated with four-strain cocktails of E. coli O157:H7 and Salmonella were soaked into hot water at 80 and 90 degrees C with shaking for various periods and then dipped in chilled water for 30 s.
The treated seeds were then assessed for the efficacy of the treatment for reducing populations of the pathogens and the effects of the treatment on germination. After inoculation and air drying, 6.08 +/- 0.34 log CFU/g E. coli O157:H7 and 5.34 +/- 0.29 log CFU/g Salmonella were detected on the seeds.
After hot water treatment at 90 degrees C for 90 s followed by dipping in chilled water for 30 s, no viable pathogens were found and no survivors were found in the enrichment medium and during the sprouting process. The germination yield of the seed was not affected significantly.
Therefore, hot water treatment followed by dipping in chilled water for 30 s could be an effective seed decontamination method for mung bean seeds intended for sprout production. PMID: 18468042

Malt is produced principally from barley, and barley when it sprouts produces hordenine.   Hordenine is found in the sprouted seeds of barley (Hordeum vulgare) (~ 0.2%, or 2000 μg/g), proso millet (Panicum miliaceum) (~ 0.2%), and sorghum (Sorghum vulgare) (~0.1%).

Hordenine is classified as an antifeedant.  An Antifeedant is "a naturally occurring substance in certain plants which adversely affects insects or other animals which eat them".[OED]

So where does that leave the malt producers?  The answer, it appears depends on how you malt the seeds.  It also shows why malting is such a specialised skill.

Since barley, via its conversion to malt, is used extensively in the production of beer, beer and malt have been examined by several groups of investigators for the presence of hordenine. Citing a 1965 study by McFarlane, Poocharoen reported that beer contained ~ 12–24 mg/L, wort contained ~11–13 mg/L, and malt contained ~ 67 μg/g of hordenine.

The hordenine content of various malts and malt fractions was extensively studied by Poocharoen himself, who also provided a good coverage of related literature up to 1983. This researcher found a mean concentration of hordenine in raw barley of ~ 0.7 μg/g; in green malts (i.e. barley that had been soaked in water for 2 days then germinated for 4 days), the mean concentration was ~ 21 μg/g, and in kilned malts (i.e. green malts that had been heated in a kiln for 1–2 days) the mean concentration was ~ 28 μg/g. When only green malt roots were examined, their mean content of hordenine was ~ 3363 μg/g, whereas the mean level in kilned malt roots was ~ 4066 μg/g.

It has been established that, in barley, hordenine levels reach a maximum within 5–11 days of germination, then slowly decrease until only traces remain after 1 month. Furthermore, hordenine is localized primarily in the roots.

In comparing literature values for hordenine concentrations in "barley" or barley "malt", therefore, consideration should be made of the age and parts of the plant being analyzed: the figure of ~ 2000 μg/g cited in the review by Smith, for example, is consistent with Poocharoen's [11] figures for the hordenine levels in the roots of malted barley, but not in "whole" malt, where his figures of 21-28 μg/g are more consistent with McFarlane's figure of ~ 67 μg/g. On the other hand, there is a wide range of variability: a study by Lovett and co-workers of 43 different barley lines found concentrations of hordenine in roots ranging from 1-2625 μg/g fresh weight. These workers concluded that hordenine production was not under significant genetic control, but much more susceptible to environmental factors such as light duration. 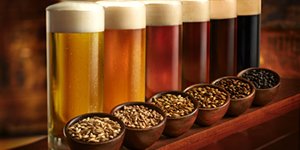 In effect, the amounts are dependent on light levels, length of sprouting and whether one takes the entire plant or just the roots into account. 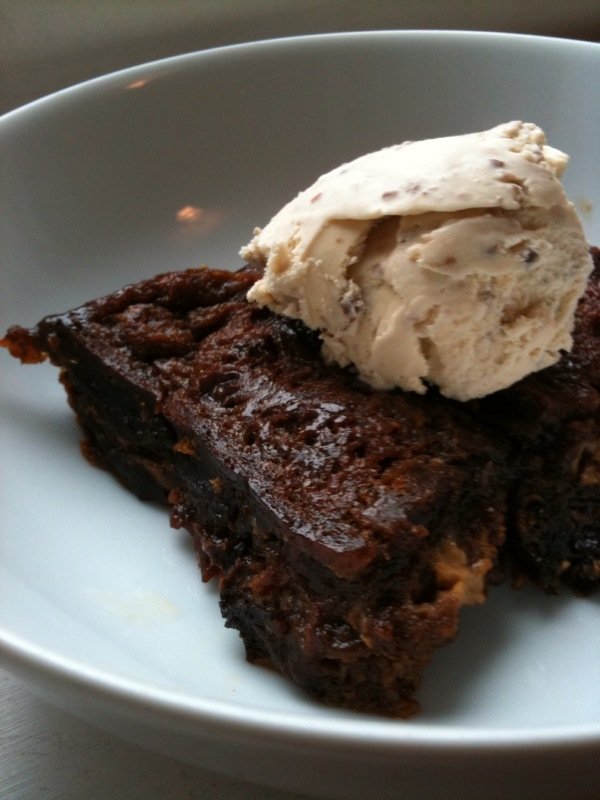 Eat the sprouted seeds raw in salads, stir fry them and use the malt in cooking. Drink the whisky and beer in moderation.  Use the malt in Fruit malt loaf.

But do not assume all sprouted seeds are good to eat.

As long as the process of extracting the malt has been a safe one, and the seeds themselves are safe once sprouted, then the rewards are significant.  Malt and sprouted seeds are an almost complete food containing minerals, vitamins and amino acids.  In some cases all the amino acids. 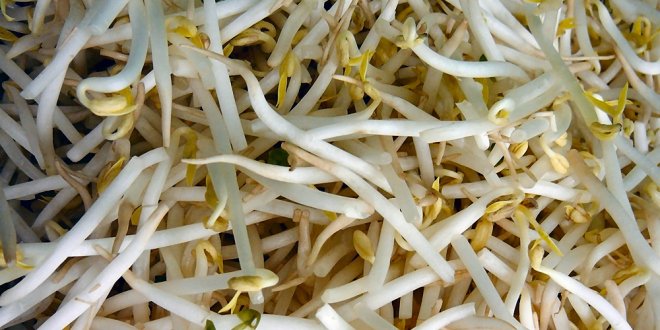