According to Wikipedia a seed is 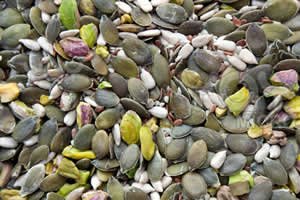 “a small embryonic plant enclosed in a covering called the seed coat, usually with some stored food. It is the product of the ripened ovule of gymnosperm and angiosperm plants which occurs after fertilization and some growth within the mother plant. The formation of the seed completes the process of reproduction in seed plants (started with the development of flowers and pollination), with the embryo developed from the zygote and the seed coat from the integuments of the ovule”

In this context I have defined a seed as an edible seed – and one that can be eaten without cooking. Again, in order to clarify the definition used here this then distinguishes them from

There are a great number of edible seeds. Examples include

And they have healing properties

Toast them or fry them in very hot oil for only  a few seconds if their coating is very hard.  The toasting releases flavours and gives them a wondefully nutty flavour.  Those that are not too hard can also be eaten raw.

Some seeds are delicious sprinkled over cooked vegetables.  Asafoetida can be used to spice them up a bit.  They can also be added to salads.  For example apple cabbage and toasted sunflower seeds dressed with walnut oil and sea salt; fresh spinach leaves [young ones] with white peach slices and toasted pumpkin seeds dressed with hazelnut oil and a little sea salt; crunchy lettuce with strawberry slices, black pepper and poppy seeds, dressed with olive oil.

Cooking apple lightly roasted in the oven with a filling of dates can be dressed with honey and toasted sesame seeds for dessert.

Can't think of any