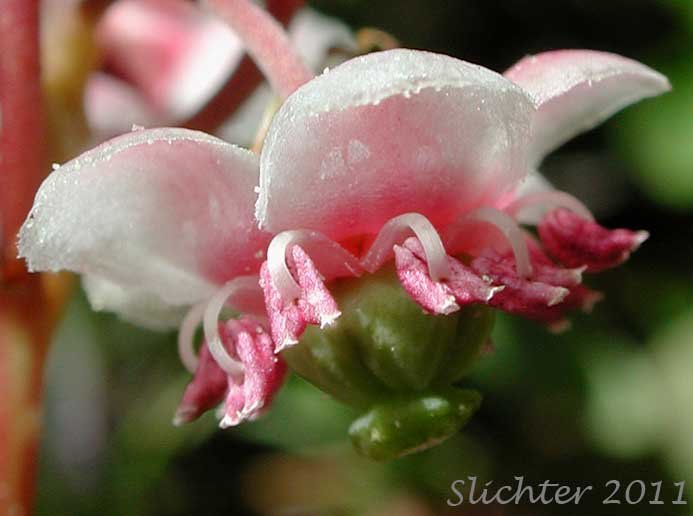 It is native throughout the cool temperate Northern Hemisphere.  "Pipsissewa" is a Cree name meaning "It-breaks-into-small-pieces".

A lover of winter indeed (cheima = winter and phileo = to love) is the Prince's Pine, whose beautiful dark leaves keep their color and gloss in spite of snow and intense cold. A few yards of the trailing stem, easily ripped from the light soil of its woodland home, make a charming indoor decoration, especially when the little brown seed-cases remain. Few flowers are more suggestive of the woods than these shy, dainty, deliciously fragrant little blossoms.

Pipsissewa grows 10–35 cm tall, and has evergreen shiny, bright green, toothed leaves arranged in opposite pairs or whorls of 3-4 along the stem. Leaves have a shallowly toothed margin, where the teeth have fine hairs at their ends.

The flowers are white or pink, produced in a small umbel of 4-8 together, fragrant, waxy, usually with a deep pink ring around the centre, and the anthers coloured; about 1/2 in. across; several flowers in loose, terminal cluster. Calyx 5-cleft; corolla of 5 concave, rounded, spreading petals; 10 stamens, the filaments hairy; style short, conical, with a round stigma.  The plant flowers from June to August

The stem is trailing far along ground, creeping, or partly subterranean, sending up sterile and flowering branches 3 to 10 in. high.

Although it has green leaves year-round, it receives a significant portion of its nutrition from fungi in the soil (that is, it is a partial myco-heterotroph, which is not surprising as related plants, such as Pyrola, are partial or full myco-heterotrophs). 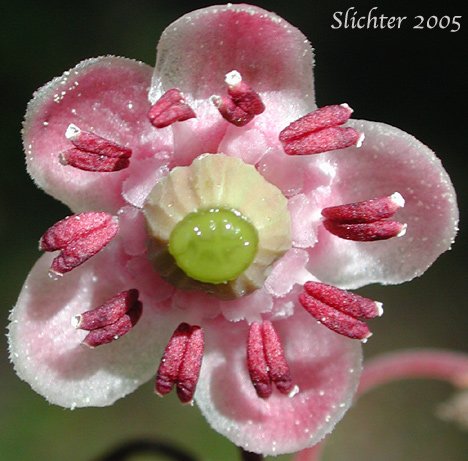 There are four subspecies:

The Spotted Wintergreen, or Pipsissewa (C. maculata), closely resembles the Prince's Pine, except that its slightly larger white or pinkish flowers lack the deep pink ring; and the lance-shaped leaves, with rather distant saw-teeth, are beautifully mottled with white along the veins. When we see short-lipped bees and flies about these flowers, we may be sure their pollen-covered mouths come in contact with the moist stigma on the summit of the little top-shaped style, and so effect cross-fertilization.

Some Plateau Indian tribes used a boil of prince's pine to treat tuberculosis and it is also used to treat urinary tract infections.  Dr Duke’s analysis – see the observations – show it to have very extensive antiviral, antibacterial and antiparasitic activity.

Plants for a Future
Pipsissewa was much used by many tribes of native North American Indians to induce sweating and treat fevers, including typhus. The plant contains hydroquinones which have a pronounced disinfectant effect within the urinary tract and modern day herbalism mainly employs the plant to treat urinary problems such as cystitis and urethritis. The whole plant is alterative, antibacterial, astringent, diaphoretic, diuretic, rubefacient, stimulant and tonic.
An infusion is used in the treatment of various problems related to the urinary system, it is also prescribed for more serious conditions such as kidney stones and gonorrhoea. A decoction is very efficacious in the treatment of skin diseases. Used externally, the fresh leaves are rubefacient and internally they are of great use in cardiac and kidney diseases, chronic rheumatism and scrofula.
Only the leaves are officinal, though the whole plant is often used. The plant is loaded with the biologically active compounds arbutin, sitosterol and ursolic acid. Arbutin hydrolyzes to the toxic urinary antiseptic hydroquinone. The plant contains glycosides and an essential oil that are used as an astringent and tonic. The plant is harvested when in flower, and the leaves on their own can be harvested during the growing season. They are dried for later use. A homeopathic remedy is made from the leaves. It is also used in the treatment of inflammations of the urinary system 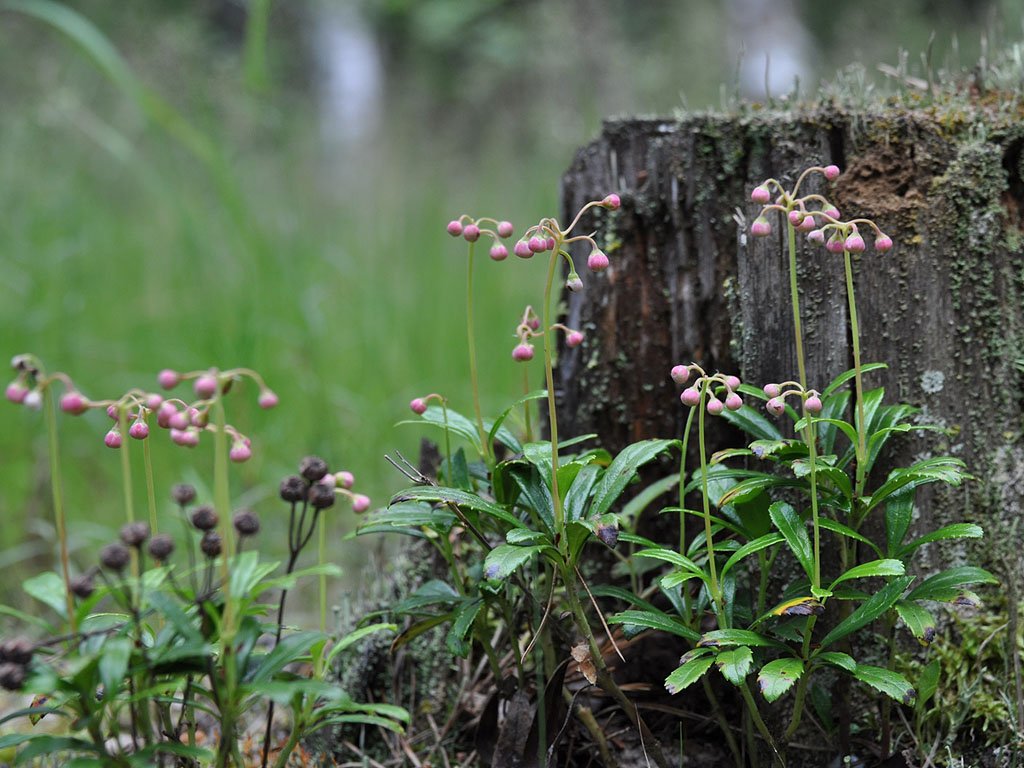