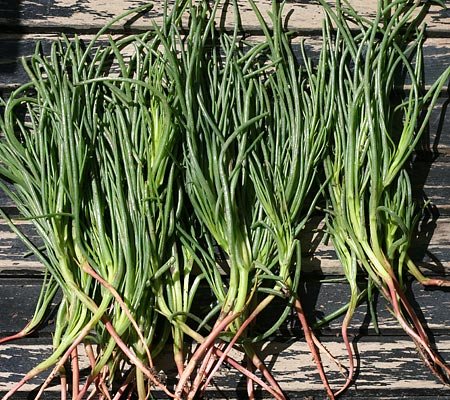 It is a spindly green vegetable, extensively grown in Italy, Spain and North Africa for its shoots.   It is only in season for five weeks of the year, between February to April but as a result of climate change, it is starting to appear earlier and in 2016, the crop started in mid-January!

Frances Mayes
Spinach is the closest taste, but while agretti has the mineral sharpness of spinach, it tastes livelier, full of the energy of spring. 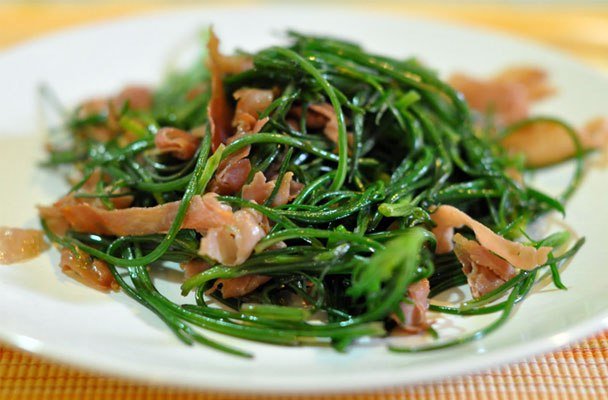 This succulent shrub is native to the Mediterranean Basin - including Spain and Northern Africa. It can also be found as a native in Eurasia.  Historically, it was well known in Italy, Sicily, and Spain. In modern Europe, it is also found on the Atlantic coasts of France and Portugal and on the Black Sea coast.  It has become naturalized along the Pacific coast of North America,  “and there is concern about its invasiveness in California's salt marshes”.  It is also reported to be naturalized in South America.

Note that there is also another plant called, very confusingly, Monk's Beard - Plantago coronopus – and this  little salad herb is also known as Herb Stella, Minutina, or Buck's Horn Plantain. Furthermore, Salsola soda also sometimes confused with a plant known in Japan as okahijiki ("Land Seaweed"), which is actually the species Salsola komarovi. The harvested leaves of the two species have a similar appearance.

Salsola soda is a small annual succulent shrub growing to 0.6 m (2ft).  It is the shoots that are harvested in Spring. The shoots look a little like chives when harvested, but the taste is more akin to spinach, because of their rich mineral content. They also have a crunchier texture, depending of course, on how you cook them.  Salsola soda is harvested in bunches when small, or cropped regularly to encourage new growth when mature. 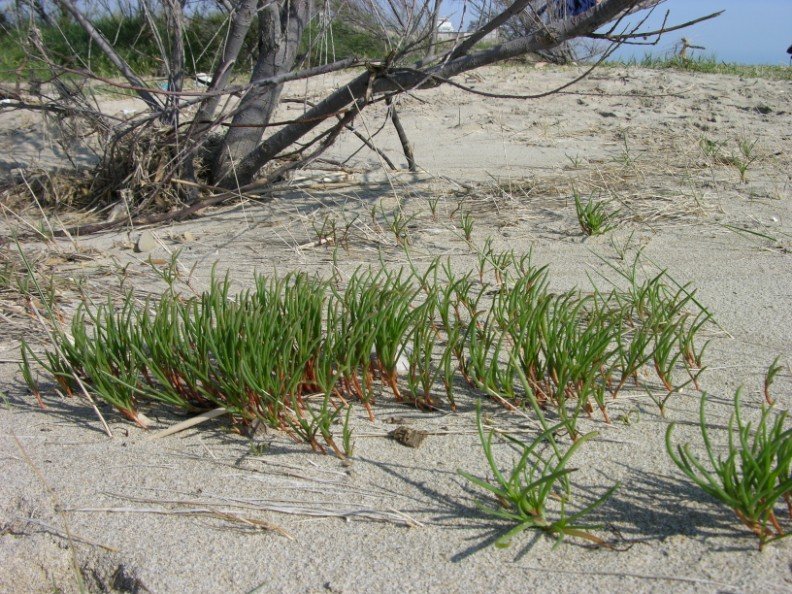 The seed is notorious for poor germination.

The plant has fleshy green leaves with either green or red stems.

The tiny flowers develop from inflorescences that grow out of the base of the leaves near the stem.  The flowers are hermaphrodite (have both male and female organs).  It is able to grow on light (sandy) and medium (loamy) soils  and is fairly tolerant of all soil types – acid, neutral and basic (alkaline) soils, but is able grow in very alkaline and saline soils.  It cannot grow in the shade. 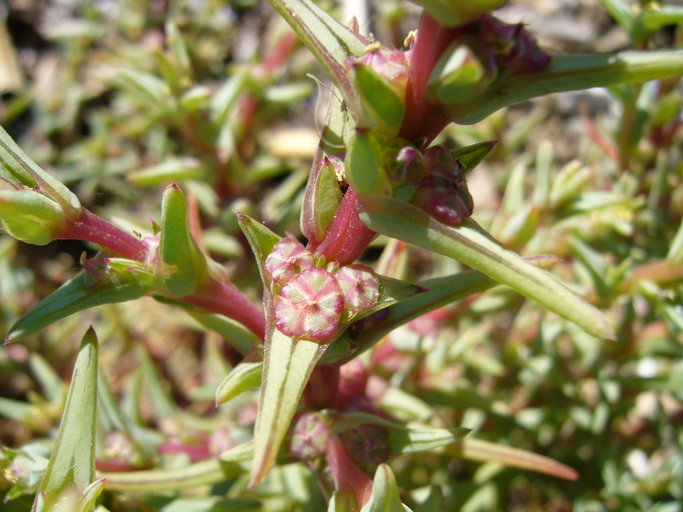 Salsola soda is a halophyte (a salt-tolerant plant) that typically grows in coastal regions and can be irrigated with salt water.  As a consequence . “The plant can tolerate maritime exposure”.

Species of the genera Salsola, Suaeda and Salicornia belong to the Chenopodiaceae family.  Salicornia herbacea (LINN.) , for example is known as Marsh Samphire. As such Monk’s Beard is quite closely related to the samphire family.

The Chenopodiaceae family as a whole are rich in soda and were once used in making both soap and glass, hence the additional common name for the family of Glassworts. Large quantities of the ashes of these plants were once imported from southern Europe and northern Africa under the name of Barilla, the chief sources being Salsola Kali (Linn.) and Salsola Soda (Linn.), the Spanish Salsola sativa (Loft) and S. tragus (Linn.). One plant native to the UK, the Jointed Glasswort (Salicornia herbacea, Linn.), was, as its name implies, also regarded as of value in the manufacture of glass. There are references in the Bible to the uses of Glasswort for soap and for glass.

The famed clarity of 16th century cristallo glass from Murano and Venice depended upon the purity of "Levantine soda ash," and the nature of this ingredient was kept secret. Spain once had an enormous 18th century industry that produced soda ash from the saltworts (barrilla in Spanish). Soda ash is now known to be predominantly sodium carbonate. 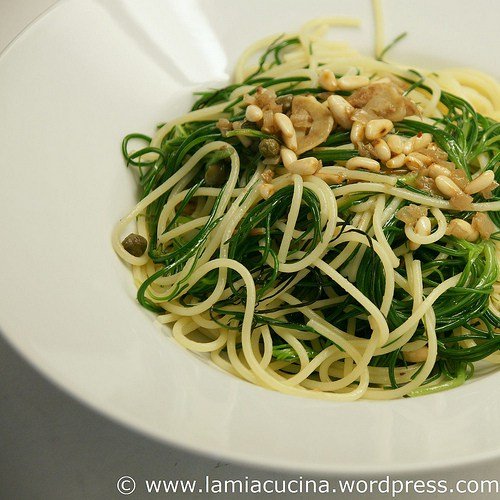 On the introduction of Le Blanc's process of obtaining soda from common salt, the importance of Barilla as an article of commerce ceased.

Restoring a loss of speech - One of the more amusing medicinal uses for ‘Glassworts’ as a whole, from days of old is as follows

Parkinson:
If the soap that is made of the lye of the ashes be spread upon a piece of thicke coarse brown paper cut into the forme of their shooe sole that are casually taken speechless and bound to the soles of their feete, it will bring again the speech and that within a little time after the applying thereof if there be any hope of being restored while they live: this hath been tried to be effectuall upon diverse persons.


So there you go, it restores speech to those ‘struck dumb’, but only if you spread it on the bottom of their  feet.  It may work – never laugh at the old recipes, most of them have a logic to them.

Bioremediation of flooded land - Monk’s Beard can thrive in soils that have become salinated [full of salt], as such it is an exceptionally useful plant in times of climate change, rising sea levels and flooding.  It helps with desalination of land that has been made too salty for any other crop. It has even been suggested as a companion plant to plants unable to tolerate the salty soil. 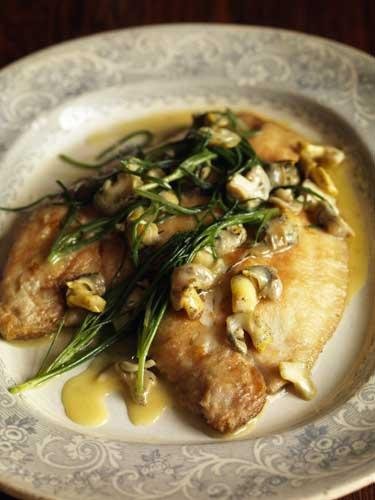 with sliced whelks, flatfish and a lemon butter sauce

Diuretic/source of salt in diet - There are a number of references to Glassworts as a whole in the old reference books, as a plant from which one can obtain salt in the diet.   Sir Thomas More, enumerating the useful native plants that would improve 'many a poor knave's pottage' if he were skilled in their properties, says that 'Glasswort might afford him a pickle for his mouthful of meat.' Referring to the fact that the entire family can grow in salty marshland or salty ground and will suck up the salt quite effectively.

Salt is a diuretic – a natural diuretic.  For those who have no problems with oedema, it can cause dehydration, but in those with oedema it can help to draw the water out of cells.  And indeed Mrs Greave mentions that another Glasswort - the Prickly Glasswort (Salsola Kali, Linn.) was once used for this medicinally – “the juice of the fresh plant was said to be an excellent diuretic, the twisted seed-vessels having the same virtue and being given in infusion”

Bioremedial Heavy metal chelation - One of the other uses of Monk’s beard is a chelator of metal contaminated soils – in  effect it is a bioremedial plant.  It can extract lead from soils, which means that you need to be extremely careful about the source of the plants.  If they have been grown near motorways or roads or near toxic outlets they could easily be contaminated with lead.

Rich source of minerals - On the plus side, however, Monk’s Beard can also chelate zinc, selenium, manganese, copper and iron from soils with an overabundance of these metals.  And of course by doing so it becomes an extremely rich source of minerals for us.  The presence of Selenium is of especial importance as selenium is a fungicide, combats breast tumours, and is a very effective antidote to mercury.  For those with amalgam dental fillings, this is a great bonus.

Because halophytes must also have potassium ions in their tissues, Monk’s Beard is also a good source of potassium. 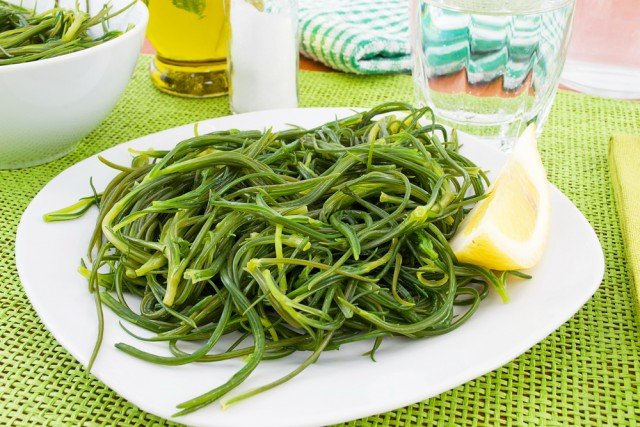 Monk’s beard can simply be served as a vegetable.  It goes well with fish or other delicately flavoured foods.  It can be steamed or plunged in boiling water for about 30 seconds and it is done.  It can be served with butter or a lemon and olive oil dressing.

It is somewhat fiddly to prepare.  You have to pick through it to remove any bits that are not completely fresh and then cut the roots off.  But it is a pleasant enough task and quite relaxing, and well worth the effort.

Many of the recipes for Monk’s beard are Italian as one would expect, given where it is now grown the most.  And Italian cuisine which is simple and based on fresh foods is perfect as the basis for this vegetable.  Monk’s Beard can be mixed with spaghetti or other pasta such as linguine and served with lemon and olive oil to accompany grilled fish or a meat like veal. It can be sprinkled over risottos.   It can also be mixed with samphire – to which it is related and served with fish, again with an olive oil and lemon or lime dressing.

It can be flavoured with garlic and anchovies, but I think this tends to lose the subtlety of the flavour.

Dabs are small flatfish and can make a tasty and cheaper alternative to some of the more luxurious flatfish such as Dover and lemon sole. This said, the same recipe works very well with fillets of Dover or lemon sole. 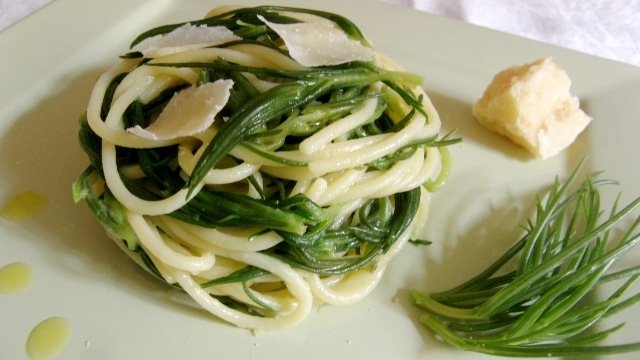 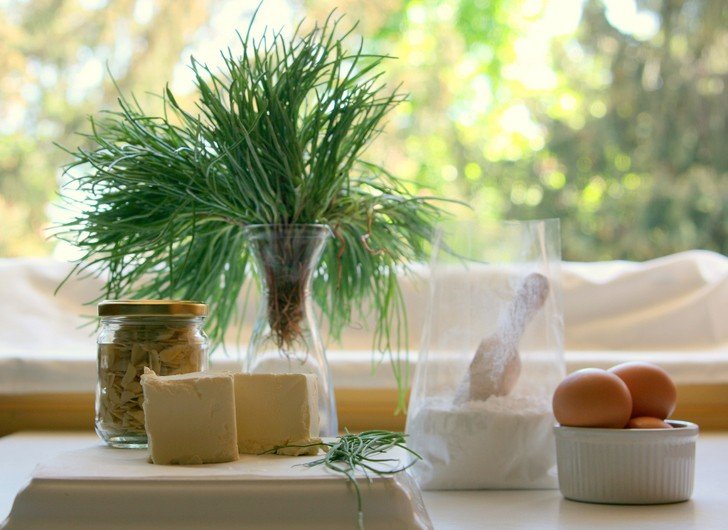 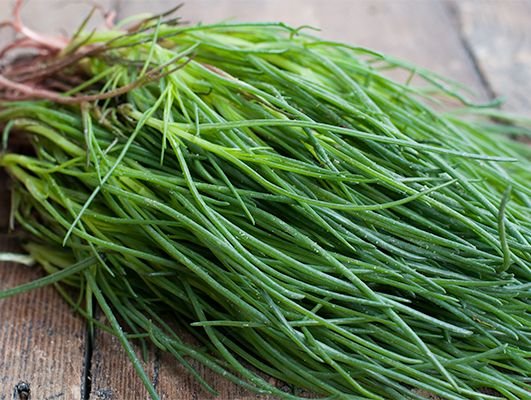