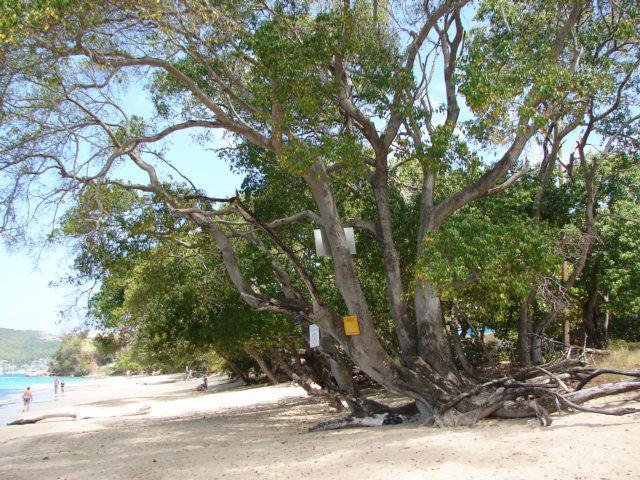 The manchineel tree, Hippomane mancinella, is a species of flowering plant in the spurge family (Euphorbiaceae).

It is native to to the Caribbean, the U.S. state of Florida, The Bahamas, Mexico, Central America, and northern South America.

A present-day Spanish name is manzanilla de la muerte, "little apple of death" [The name "manchineel" is from Spanish manzanilla - "little apple"].  This refers to the fact that manchineel is one of the most poisonous trees in the world.  The tree is recorded as the world's most dangerous tree by the Guinness World Records. 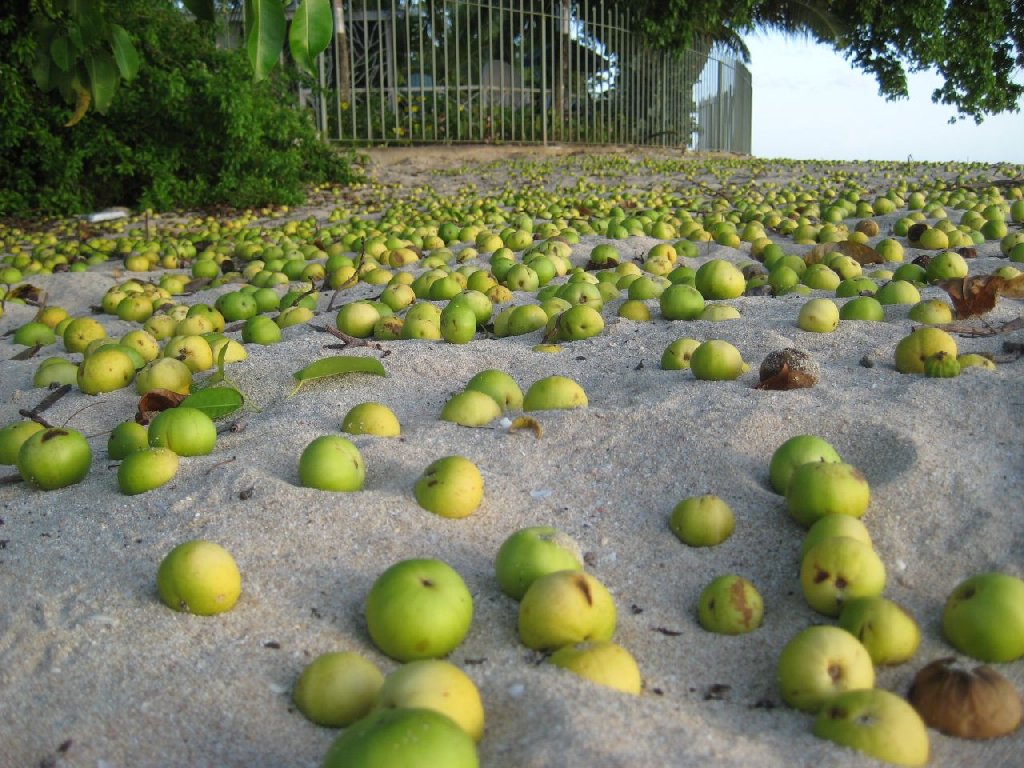 All parts of the tree contain strong toxins.

Standing beneath the tree during rain will cause blistering of the skin from mere contact with this liquid (even a small drop of rain with the milky substance in it will cause the skin to blister). The sap has also been known to damage the paint on cars. Burning the tree may cause ocular injuries if the smoke reaches the eyes. Contact with its milky sap (latex) produces bullous dermatitis, acute keratoconjunctivitis and possibly large corneal epithelial defects. 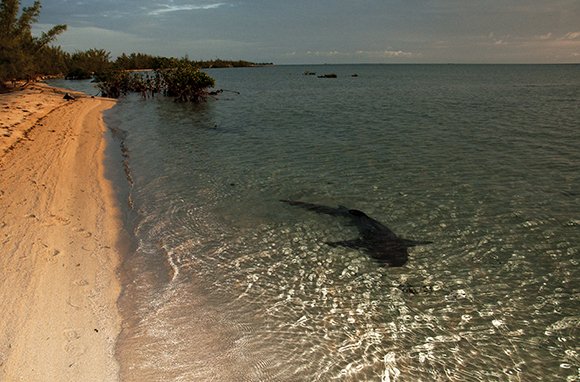 another day in Paradise, if the trees don't get you the sharks will .....

The fruit is possibly fatal if eaten, however, "fatalities from ingestion are not reported in the modern literature" and "ingestion may produce severe gastroenteritis with bleeding, shock, bacterial superinfection, and the potential for airway compromise due to edema.

Patients with a history of ingestion and either oropharyngeal burns or gastrointestinal symptoms should be evaluated for admission in hospital. Care is supportive."

When ingested, the fruit is reportedly "pleasantly sweet" at first, with a subsequent "strange peppery feeling ..., gradually progress[ing] to a burning, tearing sensation and tightness of the throat". Symptoms continue to worsen until the patient can "barely swallow solid food because of the excruciating pain and the feeling of a huge obstructing pharyngeal lump." 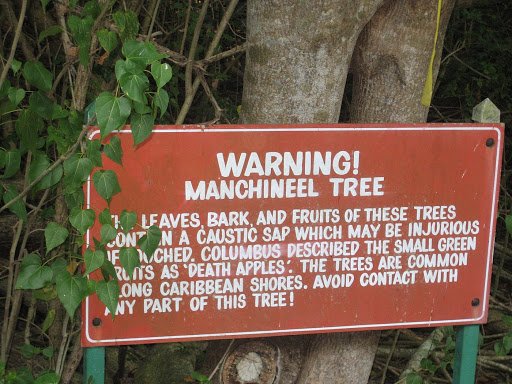 The manchineel tree can be found on coastal beaches and in brackish swamps where it grows among mangroves.

It provides excellent natural windbreaks and its roots stabilize the sand, thus helping to prevent beach erosion.  In some parts of its range, many trees carry a warning sign (for example on Curaçao), while others are marked with a red "X" on the trunk to indicate danger. In the French Antilles the trees are often marked with a painted red band a few feet above the ground.

Hippomane mancinella, the evergreen Manchineel tree, grows up to 15 metres (49 ft) tall. It has a reddish-greyish bark, greeny-yellow small flowers and shiny green leaves. The leaves are simple, alternate, very finely serrated or toothed, and 2–4 inches long.  Spikes of small greenish flowers are followed by the fruits, which are similar in appearance to an apple, are green or greenish-yellow when ripe.

At this point, you would be justified in thinking ‘what on earth is a plant this dangerous doing on the site?’  But it is a medicine, not a food and according to the definitions of medicines, it has chemicals in it which if extracted carefully and properly by someone who knows what they are doing and subsequently given in exactly the right dose, to people with specific illnesses, has healing properties.

The only chemical in the plant thus far identified as having medicinal uses is physostigmine.  We have provided observations from Dr Duke showing its uses, but the following extract from a published paper, shows that even in the most dangerous plant in the world there is good to be found.

STUDY OBJECTIVE:  To compare the efficacy and safety of physostigmine with benzodiazepines for the treatment of agitation and delirium associated with anticholinergic poisoning.

RESULTS:  Physostigmine controlled agitation and reversed delirium in 96% and 87% of patients, respectively. Benzodiazepines controlled agitation in 24% of patients but were ineffective in reversing delirium. Initial treatment with physostigmine (n=30) resulted in a significant decrease in the incidence of agitation (P <.001) and level of central nervous system stimulation (P <.001), whereas initial treatment with benzodiazepines (n=22) did not (P =.03 and P =.05, respectively). Patients treated initially with physostigmine had a significantly lower incidence of complications (7% versus 46%; P <. 002) and a shorter time to recovery (median, 12 versus 24 hours; P =. 004) than those treated initially with benzodiazepines. There were no significant differences between these groups in the incidence of side effects (7% versus 14%; P =0.6) and length of stay (median, 32 versus 39 hours; P =.15).

CONCLUSION:  Results suggest that physostigmine is more effective and safer than benzodiazepines for the treatment of anticholinergic agitation and delirium. A prospective controlled study is necessary to confirm such findings