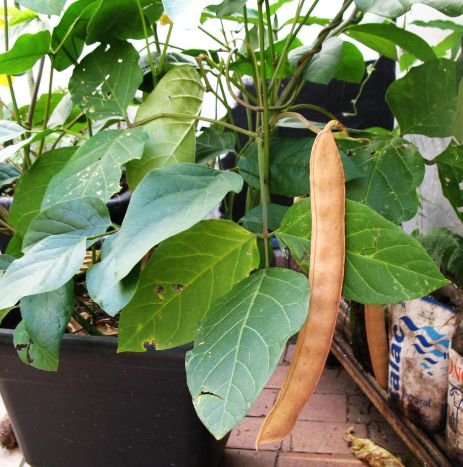 Canavalia ensiformis, or (common) jack bean, is a legume which is used for animal fodder and human nutrition, especially in Brazil where it is called feijão-de-porco ("pig bean").

The plant is not in large-scale commercial cultivation. The beans are mildly toxic, and copious consumption should be avoided. Boiling will, however, remove toxicity if done properly. Young foliage is also edible. The whole plant is used for fodder, although it cannot be used in fodder mixtures containing urea, since it contains large quantities of the enzyme urease, which liberates harmful ammonia from urea. For this reason C. ensiformis has been investigated as a potential source of the urease enzyme. It is also the source of concanavalin A, a lectin.

As a garden plant, it can grow to over 2 meters, provided it gets enough nutrients, rich soil, sun and warmth. It grows therefore in rich soil, or use extra nutrients, in a sunny warm place.