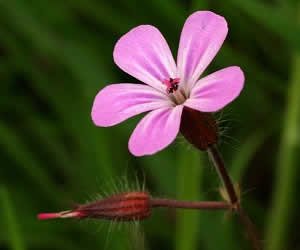 It grows as a procumbent to erect annual or biennial plant, up to 50cm high, producing small, pink, five-petalled flowers (8-14 mm in diameter) from April until the autumn. Classified as a weed, it is nevertheless an extremely pretty plant and is common throughout Great Britain in woodland, hedgerows, scree and maritime shingle.  Its main area of distribution is western Europe from the north Mediterranean coast to the Baltic. It has been introduced into many other temperate parts of the world, probably through its use as an ornamental plant, such as in the San Francisco Bay Area in California. Geranium robertianum grows at altitudes from sea level to 710 metres (2,329 ft) in Teesdale, England and above 2,100 metres (6,890 ft) in parts of mainland Europe on calcareous alpine screes.

Herb Robert is one of the ingredients in the homeopathic remedy Lymphomyosot which is used as a detoxification remedy.  Needless to say, being homeopathic, the dose is tiny.  The plant is also used in traditional herbal remedies for diarrhea; to improve the functioning of the liver and gallbladder; to reduce swelling (inflammation) of the kidney, bladder, and gallbladder; and to prevent the formation of stones in the kidney, bladder, or gallbladder.  It is also used in traditional remedies as a mouthwash or gargle. The fresh leaves are chewed to relieve sore mouth and throat. 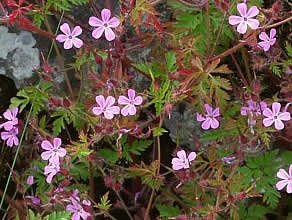 There are differing accounts on its constituents, as such it is difficult to pin down how the action is taking place.  Clearly, however, care is needed as the root of the plant is said to contain Gallic acid which has a host of actions from ACE inhibiting to Hepatoprotective [ref Neuwinger, H. D. 1996. African Ethnobotany - Poisons and Drugs. Chapman & Hall, New York].

Much of what is written about its constituents and found on the Internet is untrue.  The essential oil has been tested, which has provided an indicator of some of its constituents

Germacrenes are a class of volatile organic hydrocarbons, specifically, sesquiterpenes, which have antimicrobial and insecticidal properties and geraniol is an effective plant-based mosquito repellent.

Considerable scientific interest is currently being shown in this plant simply because it has a widespread record of being used in folk medicine.

This paper contains first systematical revision of the results on traditional use of wild medicinal and aromatic herbs on the territory of Bosnia and Herzegovina (B&H)--west of Balkan Peninsula; Southeast of Europe. There have been detected 227 plants belonging to 71 different plant families, which are being used with ethno therapeutic purpose. Results were obtained by method of open ethno botanical interview which comprised 150 persons, whose average age was 63. Medicinal plants in ethno therapy are being used either in fresh, raw or dried condition. Different herbal parts, depending on period of vegetation season, sometimes even in winter, are basis for preparation of infusions (59%), decoct (19%), tinctures (4%). Especially original are balms known as Bosnian "mehlems", which are fresh cut herbal parts mixed with lukewarm resin, raw cow butter or honey. In ethno therapy are mostly being used aerial plant organs. Majority of herbs is being used for treatment of illnesses of respiratory (22%), gastrointestinal (19%) and urinary and genital system (9%), for treatment of skin conditions (11%), as well as for nervous system and heart diseases (16%). The most original plants on the field of ethno pharmacology, comparing with ethno therapy practice of other regions, are as follows: Ballota nigra, Aesculus hippocastanum, Calluna vulgaris, Centaurea cyanus, Euphrasia rostkoviana, Geranium robertianum, Gentiana asclepiadea, Helichrysum italicum, Lycopodium clavatum, Marrubium vulgare, Nepeta cataria, Populus tremula, Ruta graveolens, Tamus communis, Teucrium montanum, T. chamaedrys, and endemic plants Gentiana lutea subsp. symphyandra, Teucrium arduini, Micromeria thymifolia, Satureja montana, S. subspicata, Rhamnus fallax and Viola elegantula. PMID:  18041402

Freshly picked leaves, if rubbed on the body, are said ‘to repel mosquitoes’.  For many vegetable gardeners one area of especial interest is that the plant also repels rabbits!

It is fascinating to discover that the foxy smell of Herb Robert has the effect of repelling rabbits. We have, perhaps insanely, tried to combine a small courtyard garden with pet rabbits for the past nine years and I have indeed noticed that the things I've planted in containers where Herb Robert has seeded itself, have been left in relative peace. Every other container and its contents has been comprehensively raided sooner or later by the rabbits - no matter how inaccessible I thought they were - and that included plants which rabbits are supposed not to like such as lavender and thyme which they bit into lots of little pieces just to exercise their teeth I think. I'm now going to study this phenomenon more closely and experiment with deliberately ring fencing precious plants with Herb Robert. It arrived by itself and I always liked it. [source PFAF]

In some respects, the homeopathic uses appear to be the safest, given that so little is yet known of what the plant contains.  Furthermore, the antibacterial and other properties are best achieved via very tiny doses, overdoses could do harm, damaging your own intestinal flora.

There are all sorts of claims made about this plants efficacy against cancer.  None I have found have any scientific backing, but as many cancers can be caused by bacteria and viruses, there may be reason to believe there is a case to be investigated scientifically here.

Coll Antropol. 2007 Sep;31(3):869-90.  The ecological aspect of ethnobotany and ethnopharmacology of population in Bosnia and Herzegovina.  Redzić SS.