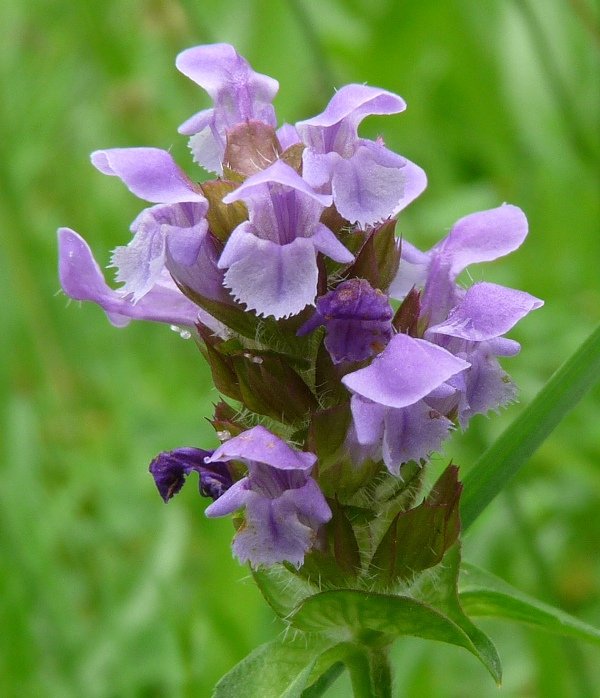 Prunella vulgaris is also known as common self-heal or heal-all.

It is a perennial herbaceous plant in the genus Prunella.  It is both medicinal and edible and has a number of quite interesting properties medicinally.  One of these is its ability to chelate.

Given that it is also edible, it may also be able to chelate us.

The leaves are lance shaped, serrated, and reddish at the tip, about 2.5 cm (1 inch) long and 1.5 cm (half an inch) broad, and growing in opposite pairs down the square stem. Each leaf has 3-7 veins that shoot off of the middle vein to the margin. The stalks of the leaves are generally short, but can be up to 5 cm (2 inches) long. 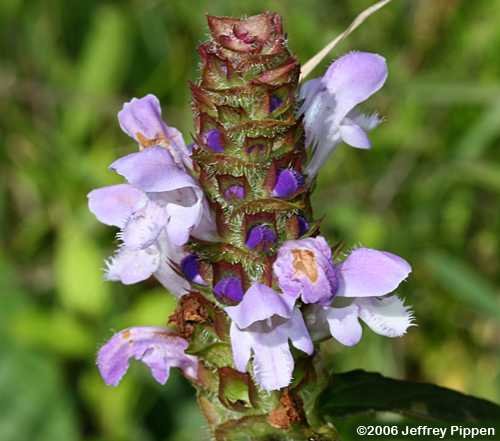 The flowers grow from a clublike, somewhat square, whirled cluster; immediately below this club are a pair of stalkless leaves standing out on either side like a collar. Flowers are two lipped and tubular. The top lip is a purple hood, and the bottom lip is often white; it has three lobes with the middle lobe being larger and fringed upwardly. Flowers bloom at different times depending on climate and other conditions, but mostly in summer.

Mrs Grieve
Each flower consists of a two-lipped calyx, the upper lip very wide and flat, edged with three blunt teeth, the lower lip much narrower and with two long, pointed teeth. Bothlips have red margins and carry hairs.
The two-lipped corolla is of a deep purple hue, the upper lip strongly arched, on the top of the arch many hairs standing on end, and the lower lip of much the same length, spreading out into three holes.
Under the roofing upper lip are two pairs of stamens, one pair longer than the other, their filaments ending in two little branches, one of which carries an anther, the other remaining a little spike.
Through the centre of the two pairs of stamens the long style runs, curving so as to fit under the lip, its lower end set between four nutlets.
Honey lies at the bottom of the corolla tube, protected from tiny insects by a thick hedge of hairs placed just above it. The flower is adapted by this formation, like the rest of the Labiate group, for fertilization by bees, who alight on the lower lip and in thrusting their probosces down the tube for the honey, dust their heads with the pollen from the anthers and then on visiting the next flower, smear this pollen on the end of the curving style that runs up the arch of the upper lip and thus effect fertilization.
After fertilization is effected, the corolla falls out of the sheath like calyx, which, however, remains in place, as do also the two bracts supporting each whorl. When all the purple corollas have fallen and only the rings of the persistent calyces remain, the resemblance to an ear of corn, which Culpepper points out, is very marked.

Self-heal propagates both by seed and vegetatively by creeping stems that root at the nodes. 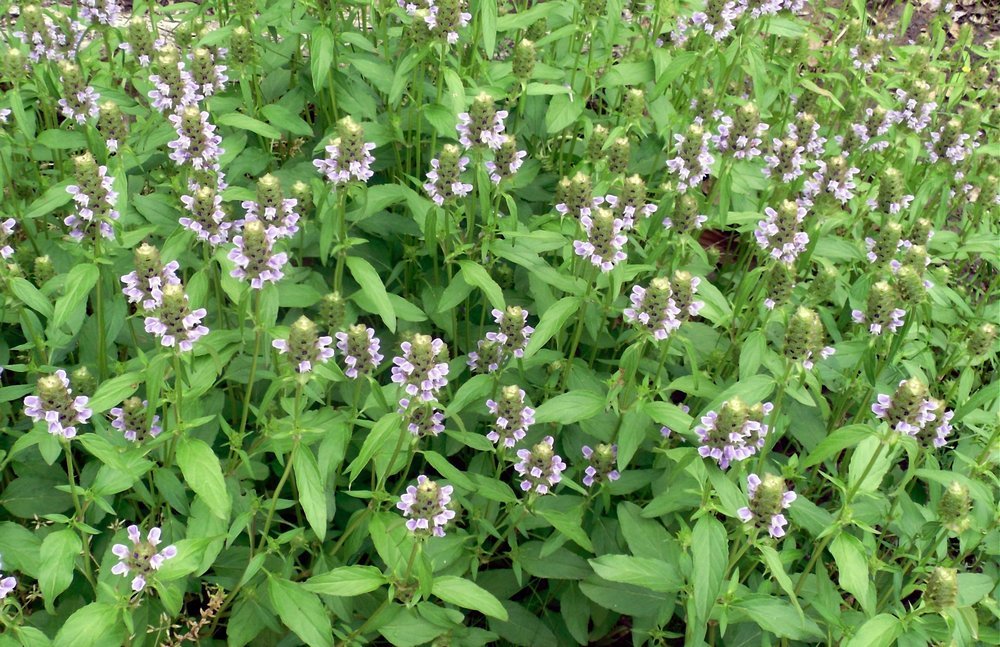 Heal-all is found throughout Europe, Asia and North America, as well as most temperate climates.  In the Republic of Ireland, for example, it is currently abundant in the west in the counties Galway and Clare, the southwest in Kerry, the south coast, and is also found around the central basin of Ireland. It is often found growing in moist areas, waste ground, grassland, woodland edges, and usually in basic and neutral soils. 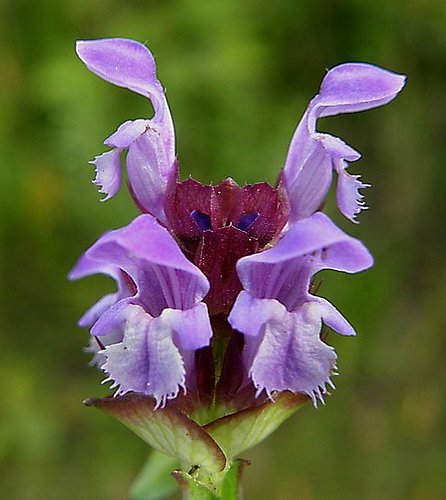 As its name implies, heal-all was once a plant used to treat all sorts of wounds and external skin problems.

Topically, a poultice of the plant was applied to irritated skin, as a disinfecting agent and to pack wounds in the absence of other wound-care material.  It once had considerable application on battlefields because of this.

Gerard
'There is not a better Wound herbein the world than that of SelfHeale is, the very name importing it to be very admirable upon this account and indeed the Virtues doe make it good, for this very herbe without the mixture of any other ingredient, being onely bruised and wrought with the point of a knife upon a trencher or the like, will be brought into the form of a salve, which will heal any green wounde even in the first intention, after a very wonderful manner, The decoction of Prunell made with wine and water doth join together and make whole and sound all wounds, both inward and outward, even as Bugle doth. To be short, it serveth for the same that the Bugle serveth and in the world there are not two better wound herbs as hath been often proved.'

Both Mrs Grieve and Culpepper, however, also recommend its use for internal 'wounds', in the form of a syrup - a syrup being more soothing.

Overall, the general view of both of them - in the days when viruses and bacteria were not known as they are today, is that Heal-all is a very good anti-viral and anti-bacterial agent.  Culpepper is none too specific but he even mentions its ability to help afflictions "also in the secret parts".

Rather intriguingly, the Chinese used the seed for quite serious illnesses including hepatitis and tinnitus.  It was considered by the Chinese to "change the course of a chronic disease".

Firstly, Heal-all is an antiviral and an antibacterial against some pretty hefty viruses and bacteria.  It is also a true medicine far more than a food, however, as too much of it could be dangerous.

It is not only a bioremedial plant, but can act as a chelation agent on humans too.  It is an Antidote for Aluminium poisoning and lead poisoning.  The former has taken on new interest as people now realise they may have suffered damage from the aluminium used as the adjuvant in vaccines. 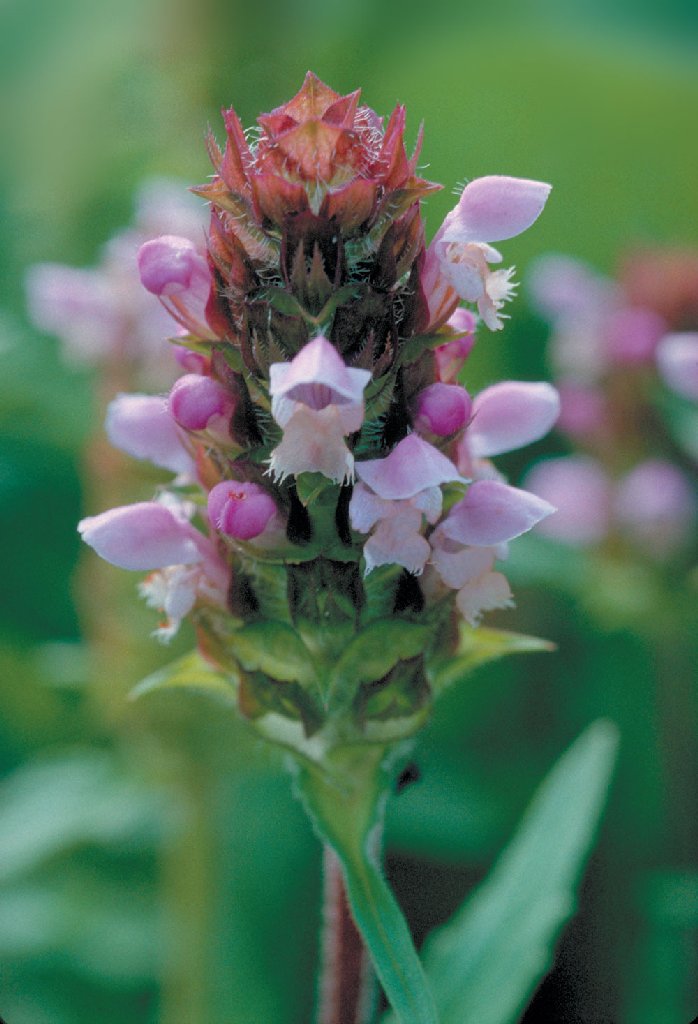 In Dr Duke's analysis, he found mercury, which means that the plant also chelates mercury - in this case from the soil, - as neither plants nor humans have any biological use for mercury.

Its action against heavy metals as well as bacteria and viruses internally means that it can help with a host of illnesses caused by these pathogens – too many to list, but illnesses such as atherosclerosis, and rheumatoid arthritis.

Heal-all has some efficacy against practically all of these, as such it is a true healer.  Pharmaceuticals mask symptoms and do not heal, healing plants tackle the causes and heal-all appears to tackle causes.

Not all causes and which particular ones will no doubt emerge in time – which bacteria, which viruses in particular and which parasites.  But the use of this plant is well justified – as a medicine.

Self-heal is edible: the young leaves and stems can be eaten raw in salads; or the plant as a whole can be boiled and eaten as a potherb.  Given its medicinal qualities this makes it of especial interest  - a healing food – the best medicine.

Dr James Duke – Handbook of Edible weeds
Facciola (1990) notes that the young shoots and leaves are eaten raw in salads, cooked with other greens as a potherb or added to soups and stews.  He suggested a refreshing beverage made by soaking the leaves, freshly chopped in cold water.  British Columbian Indians use the cold tea as a beverage, perhaps boosting their immune system in the process.

The infusion was taken for any ailment such that both Indians and Chinese regard it as a panacea… Bella Koola took it for heart conditions; Cherokee for acne, bruises, cuts and diabetic sores; Chippewa took the roots in polyherbal laxatives; Cree chewed it for sore throat perhaps reflecting its antiviral properties; Delaware used it for fever; Iriquois for backache, biliousness, cold, cramps, diarrhoea, fever, shortness of breath, sore legs, stiff knees and the like; Menominee for dysentery; Mohegan for fever; Ojibwa for female ailments, Quileute and Quiault rubbed the plant on boils and finally the Thompson Indians took the tea, hot or cold as a tonic for general maladies.