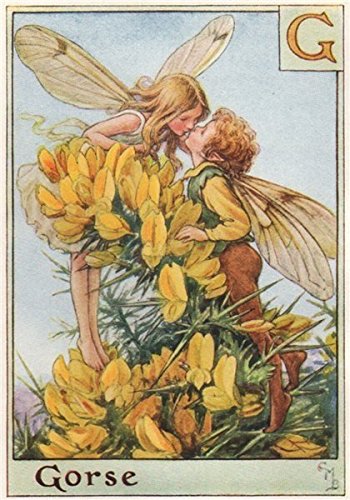 Ulex (commonly known as gorse, furze or whin) is a genus of flowering plants in the family Fabaceae. The genus comprises about 20 species of thorny evergreen shrubs in the subfamily Faboideae of the pea family Fabaceae. 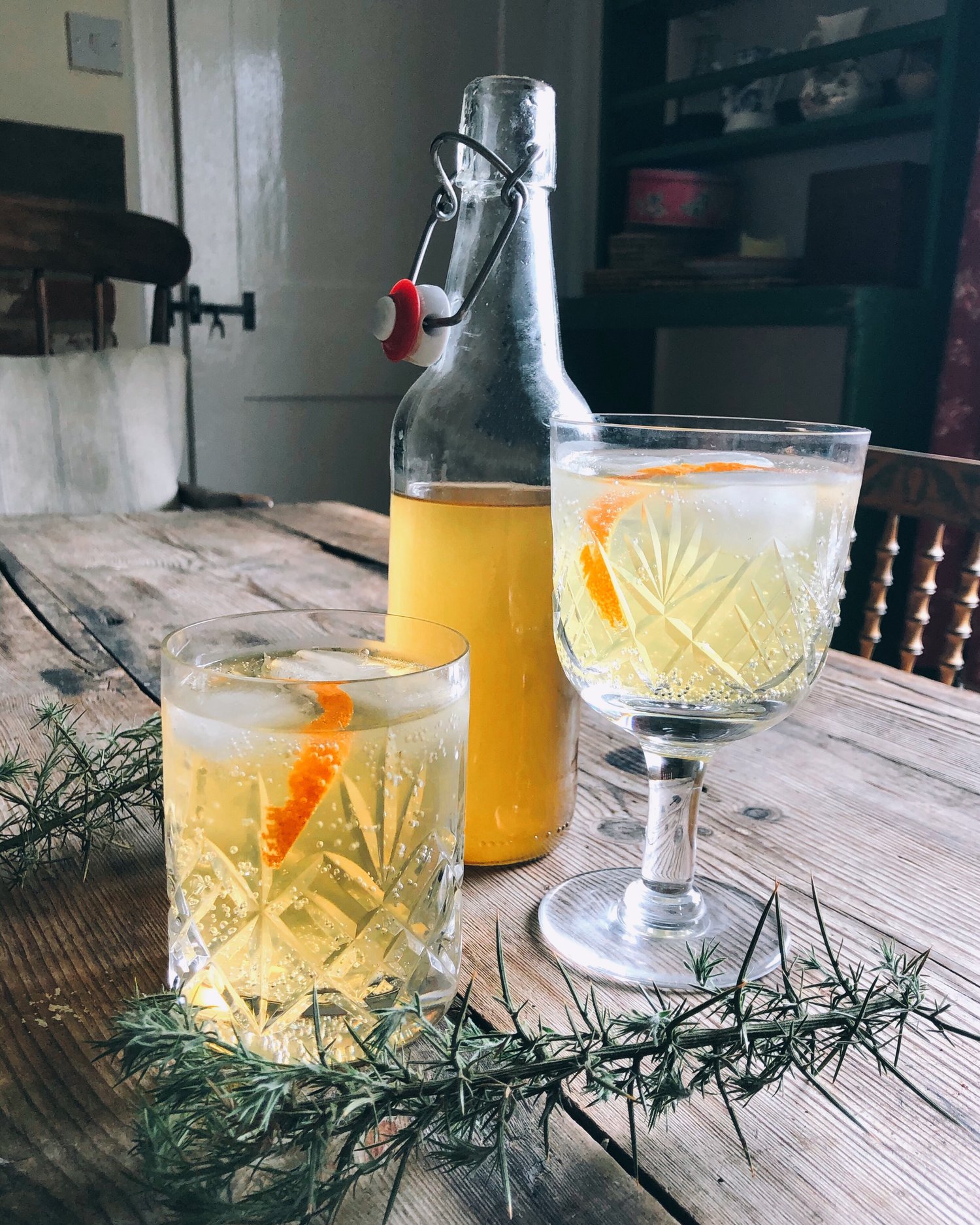 The species are native to parts of western Europe and northwest Africa, with the majority of species in Iberia.   Gorse thrives in poor growing areas and conditions including drought; it is sometimes found on very rocky soils, where many species cannot thrive. Moreover, it is widely used for land reclamation (e.g., mine tailings), where its nitrogen-fixing capacity helps other plants establish better.

In many areas of North America (notably California and Oregon), southern South America, Australia, New Zealand and Hawaii, the common gorse, introduced as an ornamental plant or hedge, has become an invasive species due to its aggressive seed dispersal; it has proved very difficult to eradicate and detrimental in native habitats. Common gorse is also an invasive species in the montane grasslands of Horton Plains National Park in Sri Lanka. 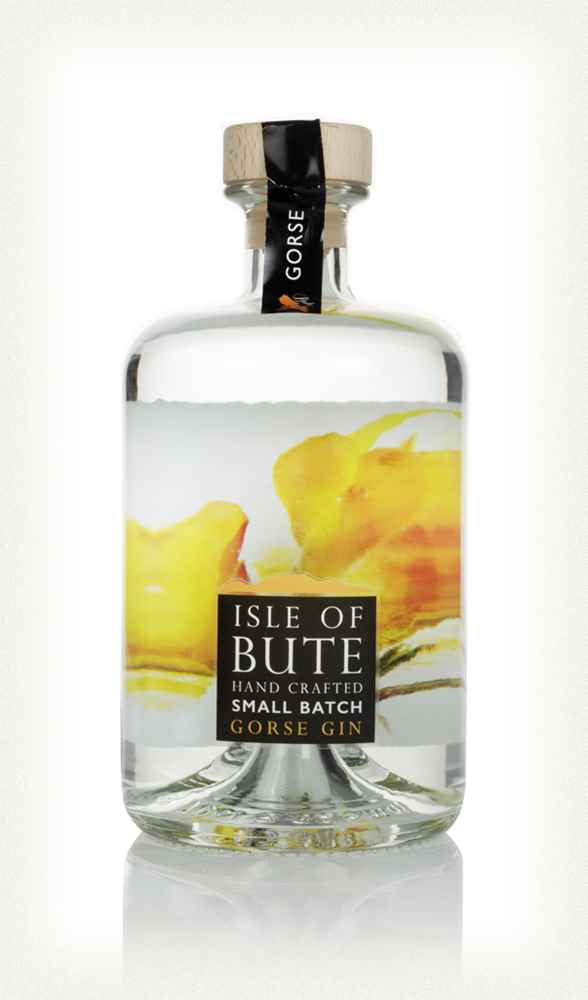 But New Zealand has, instead of fighting to eradicate the plant, turned to making a most pleasant wine from the flowers.  If you pick the flowers this reduces the number of seeds of course and thus limits its spread.

Auckland News - Could gorse wine be New Zealand's next cash crop?
Sep 27, 2018
In a shed in south-west Christchurch, a group of hobbyists may have accidentally stumbled across a way to turn the prickly plant into profit.  The Pegasus Amateur Winemakers Society think their gorse flower wine is the answer.
"With different flowers you get different results and with gorse  it has given us a golden looking wine," wine maker Dennis told TVNZ1's Seven Sharp's Julian Lee.
So, how does it taste?
"It's very coconutty, there's definitely the floral notes, I can taste the flower in there," Lee said upon tasting.

Quite a number of countries have realised that the flowers can be used in perfumes and a variety of interesting drinks.

The Isle of Bute, for example, is an island off the coast of Scotland.  Its gorse gin is currently distilled in Glasgow (for now) with plans to locate the distillery closer to the flowers. This gin showcases gorse, which 'covers Scotland for more than half the year with its bright yellow flowers'. Here, gorse is hand-picked from the Isle of Bute, and is said to "impart coconut and vanilla notes to the spirit". The distillers say that "If you have blackberries to hand, they would make an ideal garnish for this fragrant gin in a G&T." 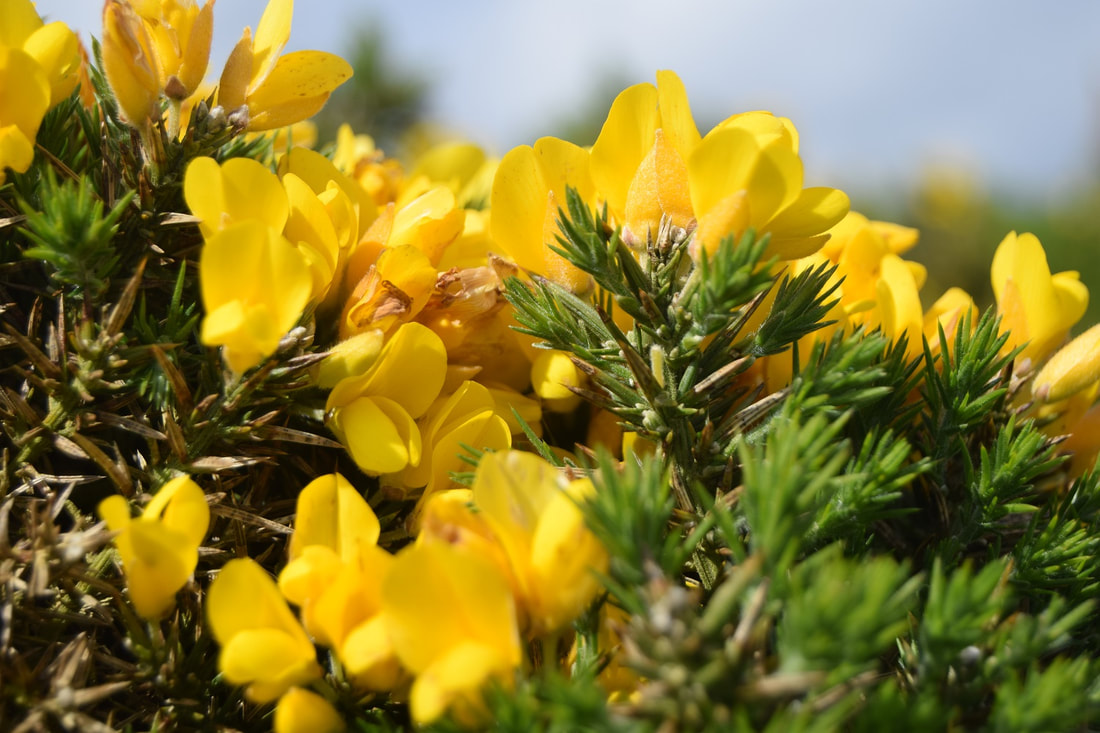 Gorse is closely related to the brooms, and like them, has green stems and very small leaves and is adapted to dry growing conditions. However it differs in its extreme thorniness, the shoots being modified into branched thorns 1–4 centimetres (0.4–1.6 in) long, which almost wholly replace the leaves as the plant's functioning photosynthetic organs. The leaves of young plants are trifoliate, but in mature plants they are reduced to scales or small spines. All the species have yellow flowers, generally showy, some with a very long flowering season.

Common gorse flowers a little in late autumn and through the winter, coming into flower most strongly in spring. Western gorse and dwarf furze flower in late summer (August–September in Ireland and Great Britain). Between the different species, some gorse is almost always in flower.   Gorse flowers have a distinctive warm peach/coconut scent. 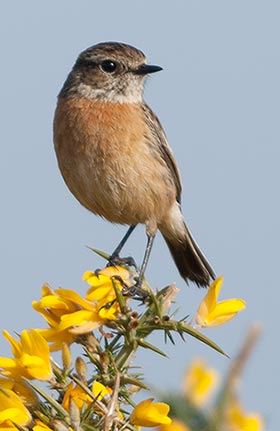 Gorse is a valuable plant for wildlife, providing dense thorny cover ideal for protecting bird nests. In Britain, France and Ireland, it is particularly noted for supporting Dartford warblers (Sylvia undata) and European stonechats (Saxicola rubicola); the common name of the whinchat (Saxicola rubetra) attests to its close association with gorse.

Many of the more interesting properties of Gorse are only just starting to emerge.  For example Culpepper was slightly dismissive of the bush, saying everyone knew what it was and what it did, so he didn't need to devote a great deal of description to it - more's the pity.  Mrs Grieve, however, was a bit more thorough in her appraisal 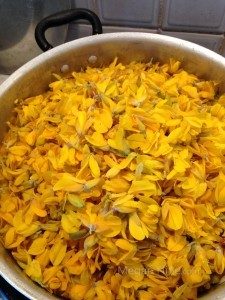 It is as well known by this name, as it is in some counties by the name of Gorz or Whins, that I shall not need to write any description thereof, my intent being to teach my countrymen what they know not, rather than to tell them again of that which is general known before.

Place. They are known to grow on dry barren heaths, and other waste, gravelly or sandy grounds, in all counties of this land.

Time. They also flower in the summer months.

Government and virtues. Mars owns the herb. They are hot and dry, and open obstructions of the liver and spleen. A decoction made with the flowers thereof hath been found effectual against the jaundice, as also to provoke urine, and cleanse the kidneys from gravel or stone ingendered in them. Mars doth also this by sympathy.

There are recipes for Gorse flower infused Gin, Gorse Wine, Gorse flower cordial and syrup, Gorse flower ice cream where the milk [or cream] is infused. A simple tea can be made from the flowers (1 tablespoons per person and infuse for 7 minutes). You can scatter flowers in salads or use them in baking. However, don’t overeat the flowers themselves (ok to infuse them) as they contain slightly toxic alkaloids. Traditionally Gorse flowers were also used to make a yellow dye. 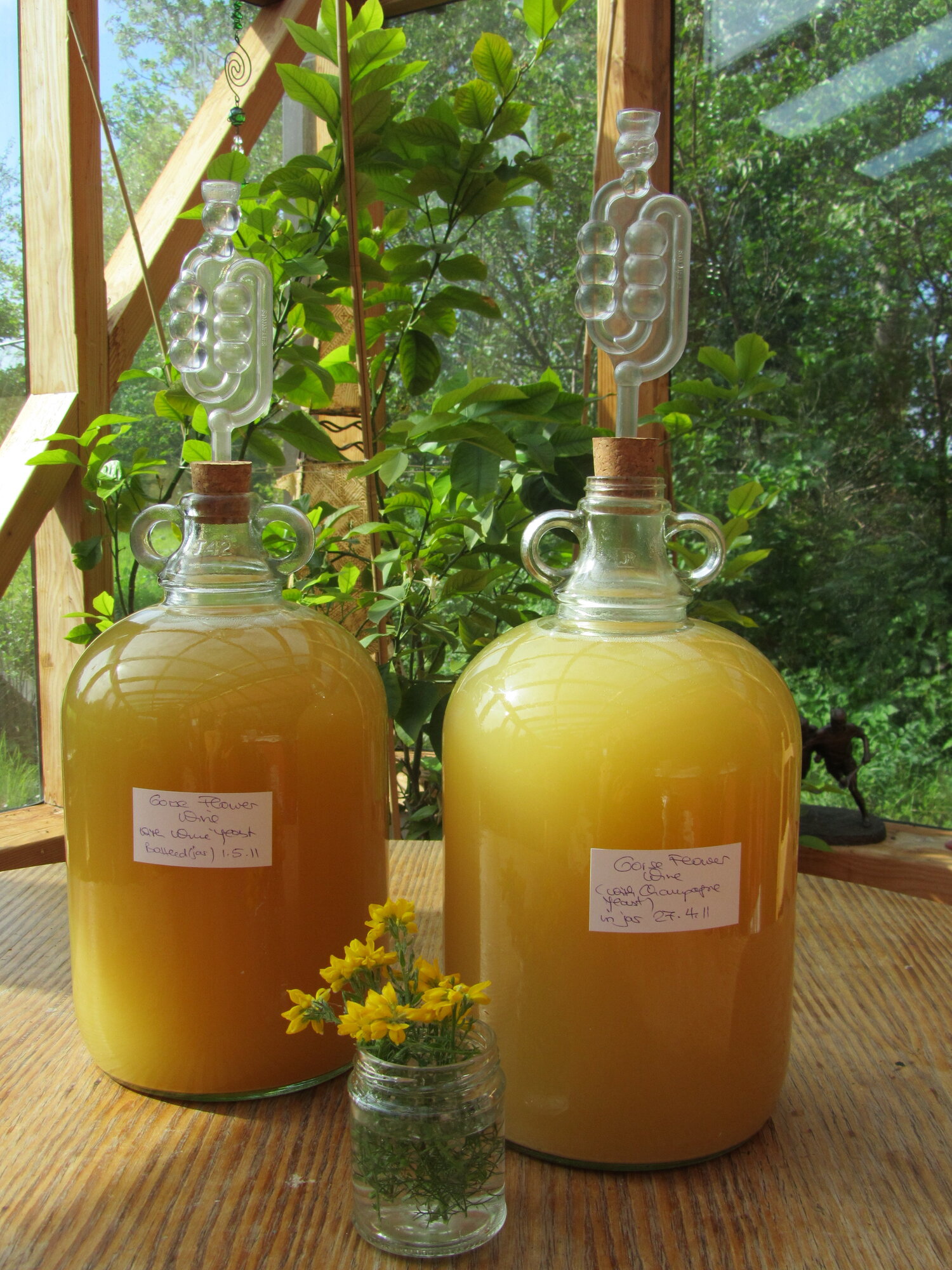 Simmer flowers water and ginger for 15 minutes, then stir in sugar until dissolved.  Slice orange and lemon and add to the cooling liquid and when just warm float the yeast on a piece of toast on top.  Cover with a folded blanket and leave undisturbed for a week, then skim off the head.  Strain into a jar, allow to work for another week before corking tightly.  A few raisins and a lump of sugar candy keep it lively.  Bottle off in November

More recent recipes also exist, but it seems that gorse flowers make delicious wine whatever the recipe and the wine is 'medicinal' in the same way that tonic wine can be medicinal. 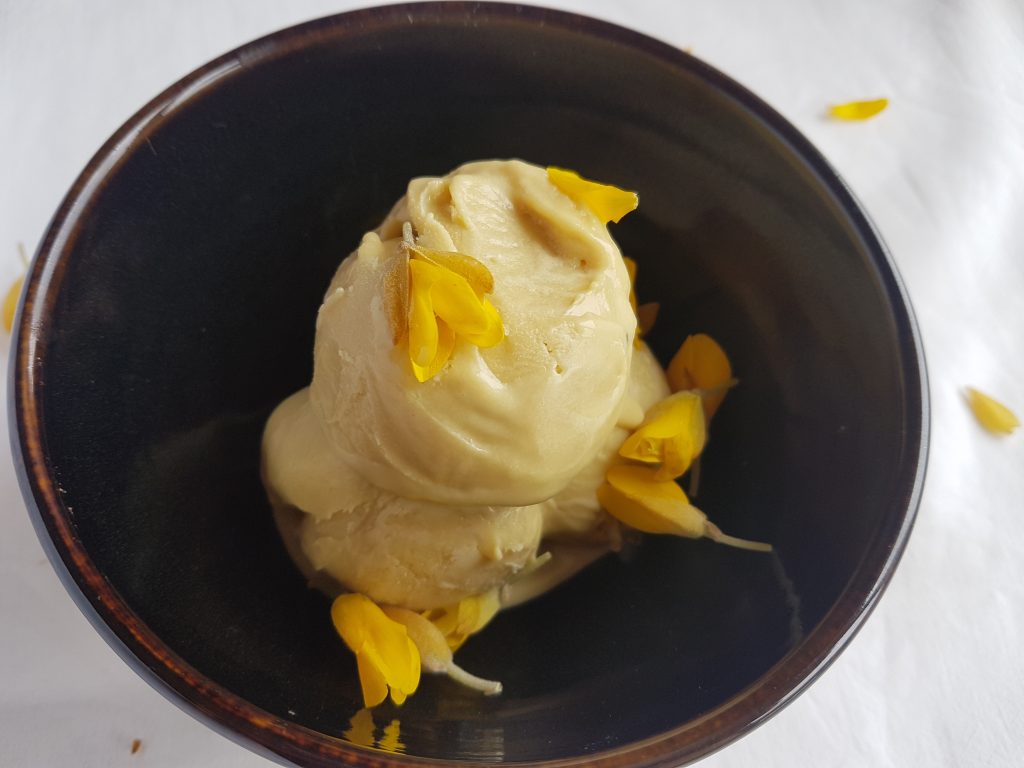 Infuse the gorse flowers with the milk/cream mix by heating gently until just simmering, then take off the heat and leave for an hour before straining and keeping the liquid. Make the custard by whisking egg yolks in a bowl with the sugar, reheating the milk cream mix, pour onto egg yolks and whisk with a balloon whisk. return to the pan and heat gently, constantly stirring with a wooden spoon, and when it starts to coat the spoon, remove immediately from the heat and transfer to a freezer-proof container. Freeze for a couple of hours, take out and stir thoroughly to break up the ice crystals, then return to the freezer. Optional to repeat once more or leave until frozen, although it won’t be as silky. Orange zest and/or juice can be added to this recipe to enhance the flavour.